RCMP may not release video made by Parliament Hill attacker: Paulson 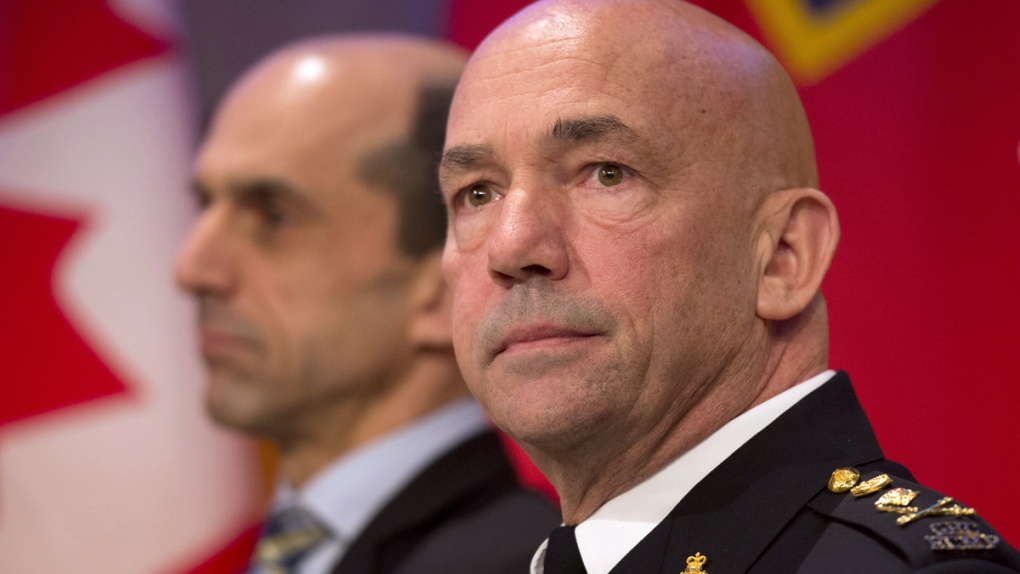 RCMP Commissioner Bob Paulson, right, and Public Safety Minister Steven Blaney listen to a speaker during an announcement on oversight to the organization in Ottawa, Monday, Dec. 1, 2014. (Adrian Wyld / THE CANADIAN PRESS)

OTTAWA -- A video made by Michael Zehaf Bibeau before he staged his attack on Parliament Hill in October may not be released to the public after all, RCMP commissioner Bob Paulson said Monday.

The opposition New Democrats and Liberals criticized the top Mountie for withholding information that they said was in the public interest, especially since he has already spoken about it publicly.

But Paulson told a news conference on Monday that investigators still need a chance to complete a full investigation of the video, which police recovered in the wake of the deadly Oct. 22 rampage.

Paulson has said in the past that the video laid out Zehaf Bibeau's reasons for the attack, which took the life of Cpl. Nathan Cirillo as he stood sentry at the National War Memorial.

Zehaf Bibeau himself was killed moments later in a gunfight inside the Centre Block building on Parliament Hill.

The commissioner had also indicated he wanted to see the video released publicly, but he now says that won't happen. Some version of its contents, such as a transcript, could be released later, he said.

"I had said that I hoped to release the video, but I think it forms a central part of the evidence. ... I think we need to think thoroughly through the benefits and the merits of releasing the video," Paulson said.

"We may look at releasing some aspects of the transcript of the video. But I don't know that we will be releasing the video."

Paulson earlier told a Senate committee that the video laid out a rationale for the attacks that was rooted in Zehaf Bibeau's religious beliefs and opinion of Canada's foreign policy.

"We're looking at preserving evidence for some sort of court process if we need to. We'll have to examine that as time unfolds," he said.

"I do understand the public interest in understanding what's in that video and I do remain interested in seeing some version of (the) ... contents of that being shared with Canadians."

Paulson said he had no new information to release about the incident, but he indicated a very active investigation was continuing.

New Democrat public safety critic Randall Garrison said Paulson has an "obligation" to release the video if he is going to comment on it publicly.

"You can't make comments and say certain things are there and then say you can't release the contents of the video. It's a basic contradiction," Garrison said.

"The public has a right to know, in particular because of the commissioner's very strong comments about what was in that video."

Liberal MP Wayne Easter said he can't understand why the video should be withheld from the public.

"I think commissioner Paulson should give a more in-depth explanation on why it shouldn't be released if it is an issue related to public safety or national security or something along those lines," said Easter, a former federal solicitor general.

"Maybe they can justify it," he added. "They were quite willing to release many of the other videos ... around the incidents, so why not this one?"

Justice Minister Peter MacKay said Monday that the RCMP was making "an operational decision" about the video's release and had no further comment.