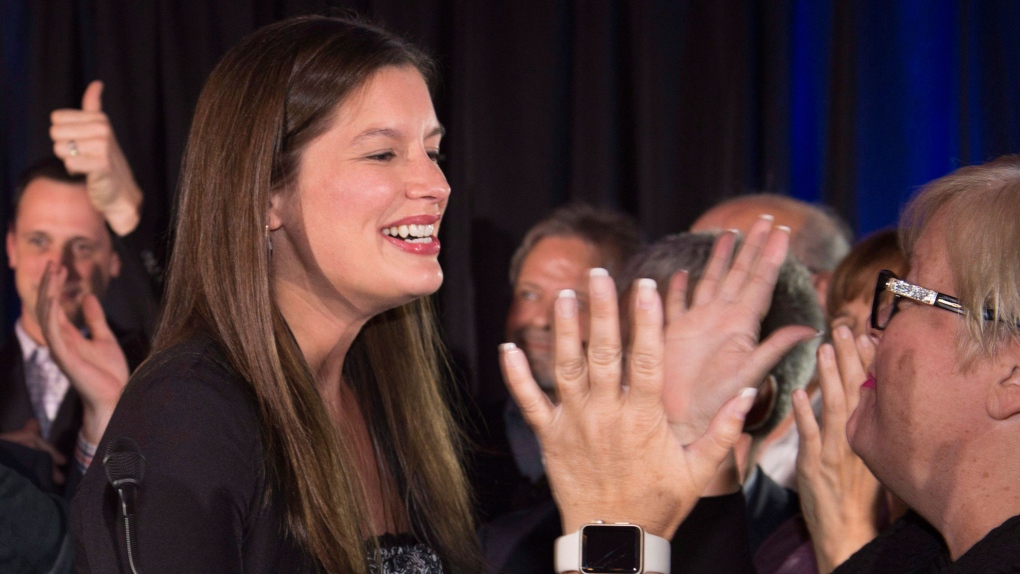 Coalition Avenir Quebec Genevieve Guilbault celebrates her victory in a provincial by-election in the riding of Louis-Hebert, Monday, October 2, 2017 in Quebec City. THE CANADIAN PRESS/Jacques Boissinot

MONTREAL -- The party jostling for the lead in Quebec opinion polls and that surprisingly stole a riding in a recent byelection is finishing the year in last place among major parties in political donations.

Coalition Avenir Quebec, a six-year-old party that is looking to unseat the governing Liberals, is heading into the 2018 election year with fewer donations than the far-left Quebec solidaire, which has three of the 125 seats in the national assembly.

The Coalition currently holds 21 seats and is broadening its base, which is currently located outside the Montreal area. Consistent polling numbers indicate Quebecers are increasingly looking at the party to park their anti-Liberal vote.

Last October, it grabbed more than 51 per cent of the vote to win a Quebec City riding held by the Liberals. Since then it has been creeping up in the polls but with only $226,706 collected in donations so far in 2017, the Coalition has received significantly less cash than its three rivals.

Rene Levesque and his Parti Quebecois reformed the province's election financing laws in the late 1970s and created "an international precedent" according to a Quebec elections commission report.

The law placed limits on contributions, banned anyone other than citizens from donating, required parties to disclose the sources of their funding and instituted a 25-cent state subsidy for each vote a party collected.

Companies found ways of getting around the rules by asking their employees to donate cash on their behalf, only to reimburse them with end-of-year or Christmas "bonuses."

When the PQ returned to power in 2012, the party quickly reformed election laws once again, slashing the maximum amount of money citizens could donate to political parties to $100 a year from $1,000, with some exceptions.

The law hiked the per-vote subsidy parties receive in order to make up for the shortfall from individual donations.

Election experts say the law favours parties that are closer to voters and that can collect small donations from a lot of people, rather than parties with ties to companies, unions and wealthy individuals.

As of Thursday, the latest donation data collected by the province's election commission reveal the PQ leads in 2017 with $755,072, compared with $650,378 for the second-placed Liberals.

Quebec solidaire had $294,704, although a spokesperson said the party's internal figures show the election commission's numbers are a few days behind and that it actually has earned a little more than $311,600 so far this year.

Gabriel Nadeau-Dubois, a former student activist who won a Montreal byelection last May for Quebec solidaire with almost 70 per cent of the vote, said he was "proud of the work done this year."

"We have exceeded our funding target in 2017," he said in a text message sent through a spokesperson.

"This is also the biggest year in our history in terms of membership revenues. This shows the strength of our movement and that more and more Quebecers are trusting us."