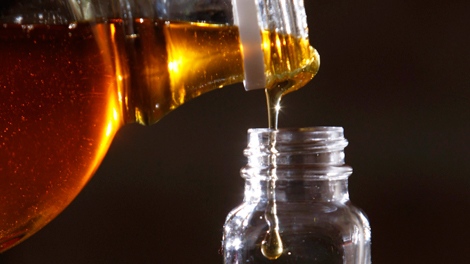 Maple syrup is poured into a bottle.

BARRIE -- An increase in demand coupled with an “average” year for production has forced Quebec maple syrup producers to tap into their strategic stockpile to ensure no pancake is left without the sweet golden sap.

The Laurierville plant and warehouse, approximately 200 kilometres northeast of Montreal, is where the province’s strategic reserve of maple syrup is stored.

The enormous facility – spanning the size of five football fields -- can hold 94,000 barrels of maple syrup, each containing 205 litres.

However, Quebec Maple Syrup Producers say this year, around 50 million pounds of maple syrup will need to be taken from those stockpiled barrels to meet increased demand.

The Federation of Quebec Maple Syrup Producers regulates the production and marketing of maple syrup in Quebec. It also sets bulk prices and quotas on the province’s syrup producers.

Hélène Normandin, a spokeswoman for Quebec Maple Syrup Producers, said 2021 was an “average year” for production.

According to the organization’s website, the 2021 harvest is estimated to be around 133 million pounds of maple syrup.

While that sounds like a lot, Normandin explained this comes after two record years for maple syrup production. In 2020 alone, a total of 175 million pounds of maple syrup was produced.

“Those years were just amazing,” Normandin said. “That was perfect to put some maple syrup in stock at the reserve, and this year we take some of it out because production was less good this spring.”

Normandin said taking syrup from the strategic reserve is “normal,” adding that the reserve is “fully playing its role right now.”

In 2020, Quebec was producing 73 per cent of all maple syrup in the world. The rest of Canada produces approximately six per cent of the world’s maple syrup, while the U.S. accounts for around 21 per cent.

Another good thing about the strategic reserve, Normandin explained, is that it helps to stabilize the price of maple syrup.

“We have a convention with the buyers,” she explained, adding that prices are negotiated every three years.

According to Normandin, more taps were added at the end of maple syrup season this past spring to help meet growing demand.

“We have 50 million taps over all of the Quebec province,” Normandin said. “And we will have seven million more in the next years to increase the production because the demand is increasing.”

Normandin said every year they decide if more quotas should be issued, based on if more syrup is needed. This helps to ensure consumers “never miss maple syrup,” she said.