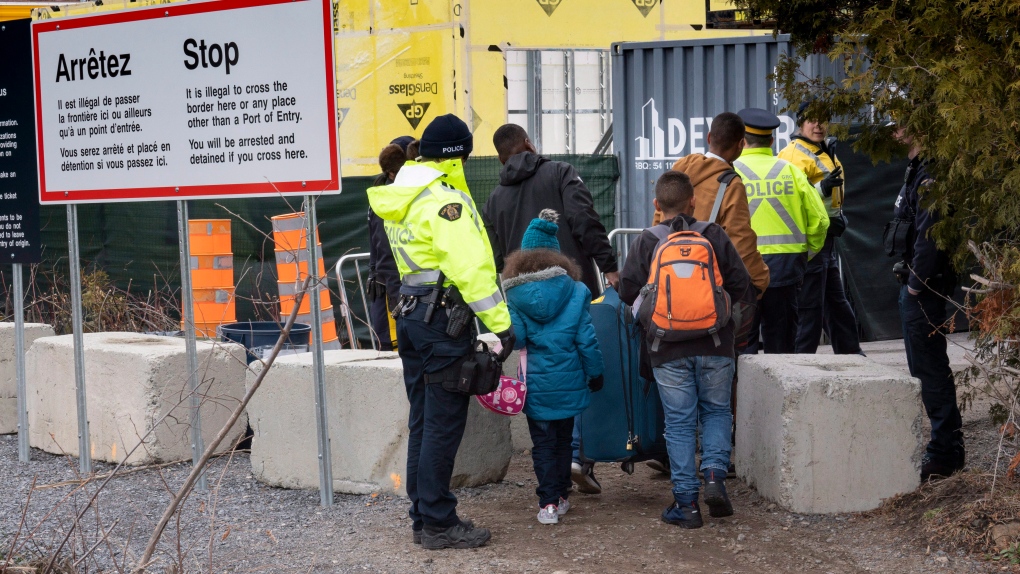 A family is arrested by RCMP officers as they cross the border into Canada from the United States as asylum seekers on Wednesday, April 18, 2018 near Champlain, NY. (THE CANADIAN PRESS/Paul Chiasson)

MONTREAL -- Almost 96 per cent of asylum seekers who have crossed illegally into Canada so far in 2018 have done so through the Quebec border.

The RCMP's latest figures on the number of illegal border crossers indicate 7,612 people entered the country outside official ports of entry during the first four months of 2018.

More than 7,300 of them have entered Quebec, while Ontario and British Columbia received the remainder, about 150 asylum seekers each, so far in 2018.

Quebec leaders have urged the federal government to help pay costs associated with the overrepresentation of asylum seekers in the province.

The province's official opposition has called on Ottawa to suspend an agreement with the United States that it says encourages would-be refugees to enter outside official border crossings.

Public Safety Minister Ralph Goodale said earlier this month his government was in exploratory talks with the U.S. to reopen the so-called Safe Third Country Agreement.

The agreement allows both countries to turn back asylum seekers at border crossings except when they enter through an illegal point of entry.

In recent months, the number of new arrivals has increased dramatically from 2017, with many would-be refugees coming from Nigeria after spending only short periods of time in the United States before boarding buses destined for the border.