Protesters against Quebec's secularism law say they're not giving up 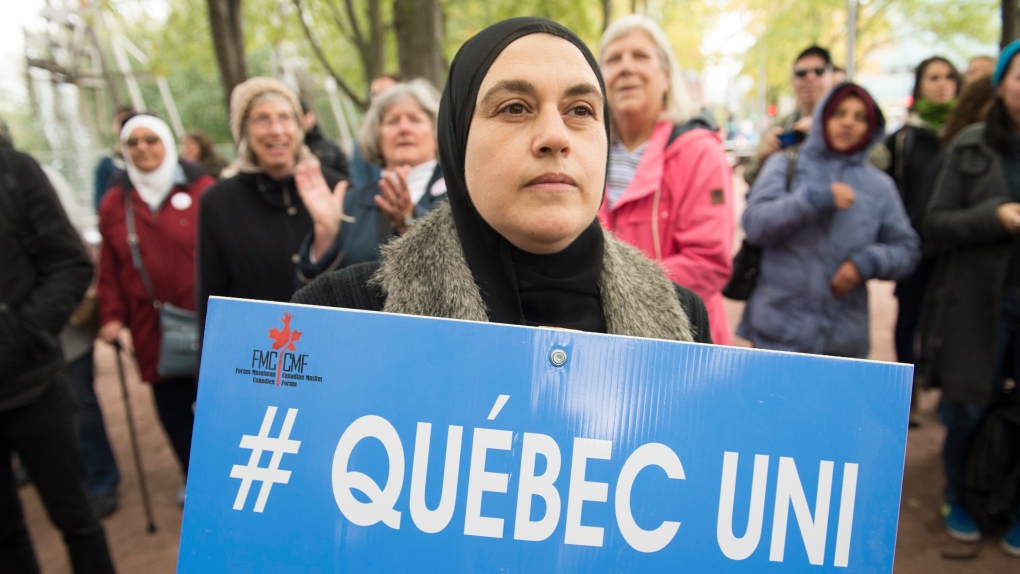 People hold up signs during a demonstration against Bill 21 in Montreal, Sunday, October 6, 2019. The controversial Quebec secularism law bans some public-sector employees from wearing religious symbols in the workplace. THE CANADIAN PRESS/Graham Hughes

MONTREAL -- Protesters against Quebec's secularism law said Sunday that they aren't giving up the fight to overturn Bill 21, with or without politicians on their side.

As a cold rain fell, dozens gathered in Montreal's Parc-Extension neighbourhood on Sunday to march against the law and systemic racism.

As the crowd huddled under the awning outside the entrance to a subway station ahead of the march, community leaders representing diverse interests highlighted what they described as the bill's discriminatory aspects.

Ichrak Nourel Hak, a teaching student who wears a hijab, said the law has emboldened those who are racist and caused an increase in Islamophobic incidents.

The legislation, which passed earlier this year and bars some government employees from wearing religious symbols while on the job, would prevent her from getting a job teaching in a Quebec public school after graduation.

"With this law, the government opened Pandora's Box and gave Islamophobes the liberty to spit on an entire religious community," she said.

"In 2019, we are harassed and discriminated against because we don't have Quebecois traits, because we have names that are unpronounceable for some, or because we have a skin colour or physical traits that are different than the majority."

Less than a week after the federal election, some in the crowd said the current political climate was as much against them as the day's wet weather.

The multicultural neighbourhood where the march took place falls in the riding of Prime Minister Justin Trudeau, who was re-elected last week with a minority government.

During the election campaign, most of the federal party leaders agreed to not intervene in any court challenges against the secularism law, at the demand of Quebec Premier Francois Legault. Only Trudeau didn't close the door to eventual legal action, but is taking a wait-and-see approach for the moment.

Malika Lounece, who attended the march with her daughter, didn't seem to have much faith in politicians.

"Will Trudeau do something? When he had a majority, he did nothing," she said. "Now that's he has a minority, I don't know."

Samer Majzoub, the president of the Canadian Muslim Forum, said he felt the federal leaders were "sensitive" to denouncing the popular law due to the need to get Quebec votes. He believes it's the federal government's role to step in and challenge any law that threatens the human rights of citizens.

"At one point the rhetoric was inclusive, but we have not seen that translated into action yet," he said. "All we have seen is good talk."

The Coalition Avenir Quebec government has defended the secularism law, saying it enjoys strong support among Quebecers and helps to ensure the state is secular.

The English Montreal School Board filed a challenge to the law last week, arguing it contravenes the section of the Canadian Charter of Rights and Freedoms that protects minority language education rights, and also has a disproportionate impact on women.

While Bill 21 invokes the Constitution's notwithstanding clause to shield it from charter challenges, the filing argues neither of the Charter sections it cites are subject to the clause.

The National Council of Canadian Muslims and the Canadian Civil Liberties Union, along with Nourel Hak, have also filed a challenge of the law and are appealing a recent Quebec Superior Court decision that rejected their request for an immediate stay of some of the law's provisions.

This report by The Canadian Press was first published Oct. 27, 2019