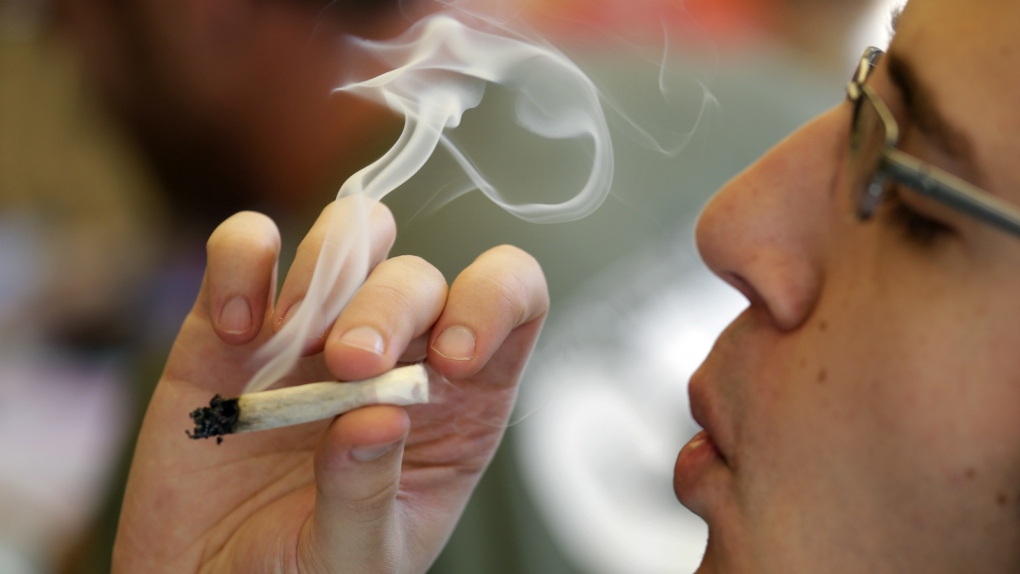 A man smokes a marijuana joint at a party celebrating weed in Seattle on Wednesday, April 20, 2016. (AP / Elaine Thompson)

TORONTO -- Alexis Vegh is working what could be a tough crowd -- about a dozen young people in their late teens and early 20s -- and she's here to speak to them about the risks of driving high after smoking pot.

"I use quite a bit of slang during the presentation," she bluntly informs them as she begins her hour-plus-long talk.

"Weed, piff, kush," she says, firing off some street names for cannabis to surprised laughter. "Lit is high. Ball up. Spark up."

Vegh is speaking their language -- and she's got their attention.

As a facilitator of the Weed Out the Risk program offered by Springboard, a community-based organization that supports at-risk youth and adults, Vegh has delivered her talk more than 200 times in the last three years, mostly to high school students. In all, more than 8,500 youth have been exposed to the message.

And with Ottawa preparing to legalize recreational marijuana next year, that message is considered more critical than ever.

Springboard is among a number of Canadian organizations ramping up efforts to teach youth about the risks of driving high, which many young people erroneously believe is not as dangerous as drinking and driving.

And it's not just those who smoke up and slide into the driver's seat: surveys show 41 per cent of youth are not concerned about getting in a vehicle with a high driver.

"The reason this scares me is this statistic right here," she says pointing to the screen. "In one in five accidents, people under 18 test positive for weed. If we put that up to (age) 29 ... I've seen numbers as high as 50 per cent."

Still, Vegh's presentation is meant to be informative and interactive -- not preachy.

"It's not about finger-waving," she tells the group of young people taking employment courses at a Springboard office in Toronto. "We do this from the harm-reduction principle. We know that people are going to use or not use and we may or may not be able to change that depending on where they're at.

"What we're looking to do is educate people around their choices."

And those choices can be deadly, as illustrated by a video Vegh runs on a screen at the front of the room, in which family and friends remember five teenaged boys from Kanata, Ont., who were killed in a fiery multi-vehicle crash in 1999 that also injured 11 others.

Toxicology tests showed the 17-year-old driver who caused the collision had significant cannabis in his system. He was convicted of impaired driving causing death and criminal negligence causing bodily harm, resulting in a year in jail.

While many parents have discussions with their teens warning of the dangers of mixing alcohol and wheels, far fewer have a similar conversation about driving while zoned out on marijuana -- or being a passenger with a high driver, says Vegh.

"So to me it doesn't make any sense that we're not having at least a frank conversation about what are the effects, what are the risks, what does it look like and how do you keep yourself safe."

Sparking conversations between parents and young people is at the heart of a campaign by Drug Free Kids Canada called The Call that Comes After, a "transmedia experience" that combines online elements with a device central to teens' lives -- their mobile phones.

"Our approach has always been on targeting the parents," says Marc Paris, executive director of the private sector-funded, non-profit charity that encourages young people to live their lives free of drug or alcohol abuse.

"And the reason we target the parents is that we find that they're the first line of defence in any drug-prevention strategy," explains Paris. "They have the most influence over kids, even though sometimes they don't quite believe they do."

Parents who visit Drug Free Kids Canada's website can customize a short online video on the dangers of driving high by inputting their teenager's name and cell number, as well as the name they use for the parent, for example "Mom."

A video is then sent to their child, showing a group of teens who make the decision to drive after smoking pot. The video culminates with a crash, followed by an increasingly frantic series of texts from a parent asking if they're OK.

The narrative then jumps to real-life as the same messages begin appearing on their child's phone or other digital device.

"As the child is watching the video, when they get to the point after the crash, the phone is on the floor (in the video) and it starts saying: 'Billy, this is Mom. Where are you?"' says Paris. "This is Billy seeing his name on the video.

"If the kid then responds to mom ... they get a note from us saying, 'Your mom asked us to send you this and we hope this is opening a conversation with your mom about high driving."'

Since launching the campaign at the end of January, visits to the website have continued to rise, with more than 100,000 over the last three months alone, he says.

Mike Serr, deputy chief of the Abbotsford Police in B.C., sent the interactive video to his two university-aged children to get their reactions.

"I think the first words were, 'Dad, you kind of freaked me out,' followed by us having a really good conversation," one of many they've had on the subject.

Serr, who's chairman of the Canadian Association of Chiefs of Police drug advisory committee, says he's also been pushing other parents to go to the website and sign up their own children.

"With alcohol, I think we've done a pretty good job of changing the perceptions of driving under the influence, but I don't think that's occurred yet with marijuana," he says. "And certainly in studies we see -- especially with youth -- they don't see the same level of danger.

"We need to spend a lot of time and effort re-educating the public and the youth about that danger."