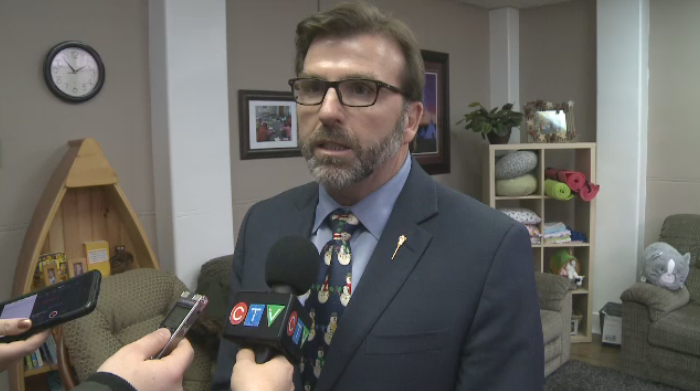 REGINA -- A spokeswoman for a national organization that promotes abortion rights says it's unacceptable that a Saskatchewan health minister spoke at an anti-abortion rally.

She said it also raises questions about his intentions with the abortion drug Mifegymiso.

" 1/8It 3/8 just throws all the people of Saskatchewan into a state of mistrust that this person doesn't have a perverse motivation for not providing cost coverage for Mifegymiso," Teitel said Friday.

Saskatchewan is one of the only provinces that does not have universal coverage of the drug, and the Saskatchewan Party government is reviewing whether it should cover the cost for everyone.

Ottenbreit told the crowd gathered for an anti-abortion association convention last week in Yorkton that he would "continue the fight."

He defended his actions Thursday by saying that while he opposes abortion, he respects that in Canada it is the law of the land.

This is the second time in recent years that Saskatchewan politicians have waded into the issue of abortion.

In a leadership race to replace out-going premier Brad Wall in 2017, some Saskatchewan Party candidates answered questions from the anti-abortion group RightNow.

Scott Moe, who would later be named premier, identified himself as anti-abortion at the time and said "there may be some opportunities as we move forward under my leadership, with respect to a caucus discussion around the potentiality of parental notification."

In a statement from his office Friday, Moe said he recently told caucus the government's policy is to support women's reproductive rights and he expects every government MLA to support that position.

"Our government will not move forward with any discussion or consideration of parental consent for abortion," Moe said.

The Ministry of Health says that from September 2017 to December 2018, 482 prescriptions for Mifegymiso were dispensed and 138 of those were covered by the province's drug plan either fully or partially.

Under the provincial drug program, the cost varies per person depending on someone's coverage and benefit programs. It costs between $300 to $450 for someone with no coverage.

The province says there are alternatives for women who are low income and need to take the drug.

Health Minister Jim Reiter recently met with a group of medical students from the University of Saskatchewan that is pressing the province to adopt universal coverage of Mifegymiso.

Lara Witt is one of those students. She said the government has promised not to let moral views guide its policy decisions and she doesn't believe members will let anti-abortion feelings interfere with the issue.

Witt said she expects to meet for a second time with Reiter in May.

The Opposition NDP has been raising the issue of universal coverage for the pill in the legislative assembly. On Thursday, Reiter said the drug is accessible and the only question is who pays for it.

"Just because it's ... in the pharmacy doesn't mean people can afford it," Witt said Friday.

"There's probably a misunderstanding on that front because we do absolutely think it's an access issue."

With Colette Stang and Valerie Hettrick at the Sask Pro-Life Convention in Yorkton at Victory Church, where I shared a few comments! pic.twitter.com/Cbiu2ry0SX