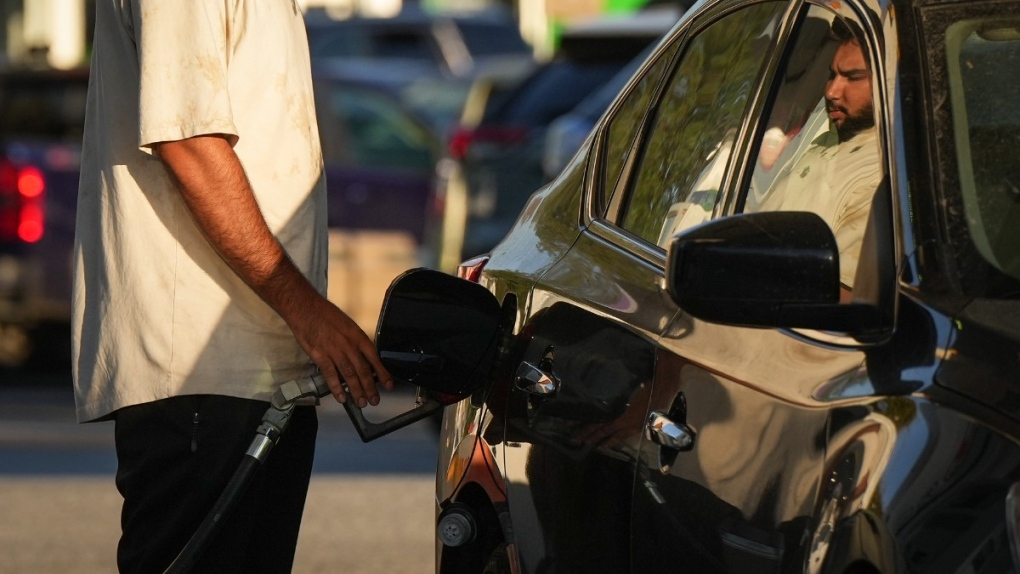 A motorist fuels up a vehicle at a Shell gas station after the price of a litre of regular gasoline reached a new high of $2.40, in Vancouver, Oct. 1, 2022. THE CANADIAN PRESS/Darryl Dyck

Gasoline prices in Canada continue to creep higher ahead of the Thanksgiving long weekend.

According to retail fuel price tracking website GasBuddy.com, the national average price for regular gasoline as of midday Wednesday was 167.4 cents per litre, up 1.1 cents from the day before and an increase of 6.5 cents from last week's average of 160.8 cents per litre.

Some commentators had predicted gasoline prices could jump as much as 10 cents per litre in some markets mid-week. While that hasn't materialized, retail gas prices -- particularly on the western half of the continent -- are still being impacted by a series of unexpected refinery outages in the U.S. that have led to supply challenges.

And while the price of crude oil slumped in September, with the international benchmark Brent sagging as low as US$84 in recent days after spending most of the summer months over $100 per barrel, it jumped on Wednesday after the OPEC Plus alliance of oil-exporting countries decided to sharply cut production.

The group will cut production by a larger-than-expected 2 million barrels per day starting in November, saying the decision was based on "the uncertainty that surrounds the global economic and oil market outlooks."

The impact of the production cut on oil prices -- and thus the price of gasoline made from crude -- will be limited somewhat because OPEC Plus members already can't meet their quotas.

Still, the move could result in higher pump prices for North American drivers. The U.S. benchmark crude price West Texas Intermediate rose to US$87.64, and Brent crude rose to $93.21 immediately following the OPEC Plus decision on Wednesday.

According to GasBuddy.com, drivers in British Columbia had the most expensive gasoline Wednesday, with a provincial average price of 220.2 cents per litre.

Ontario drivers enjoyed the cheapest fuel, at 152 cents per litre on average.

This is a corrected story. An earlier version incorrectly stated the prices for gas throughout the story.