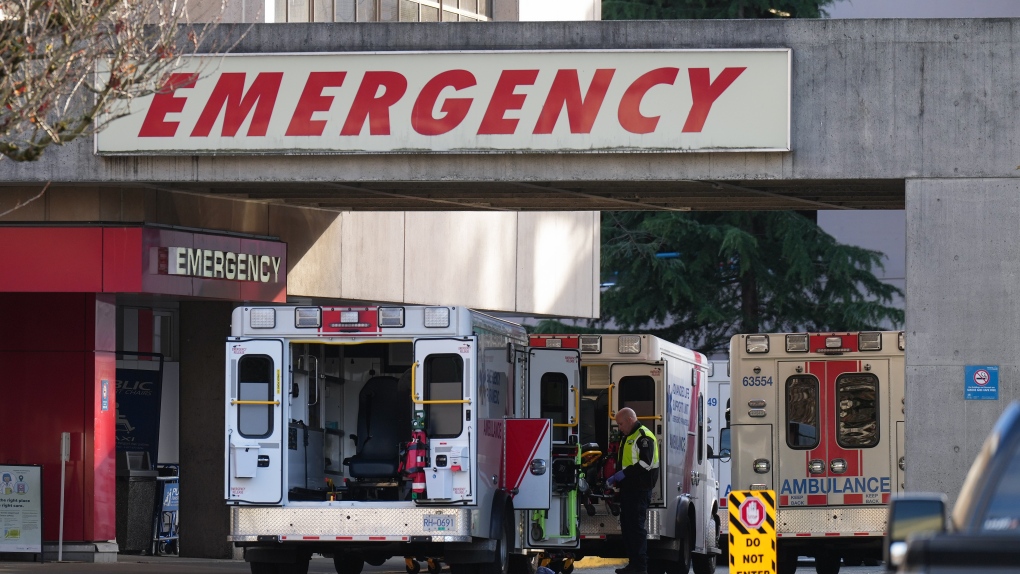 A paramedic is seen outside ambulances parked at the entrance to the emergency department at Richmond General Hospital, in Richmond, B.C., Sunday, Nov. 27, 2022. THE CANADIAN PRESS/Darryl Dyck
OTTAWA -

Canada's premiers presented a united front Friday as they demanded Prime Minister Justin Trudeau come to the table personally to hammer out an agreement for Ottawa to shoulder more of the burden when it comes to health-care costs.

Premiers also defended their refusal to accept conditions for additional federal funds, and pushed back on any suggestion of throwing their own money into the pot even though some provinces are posting budget surpluses.

The provincial and territorial leaders issued their call for a sit-down with Trudeau after a closed-door meeting in Winnipeg, one month after talks with the federal government on health-care funding ended without an agreement.

Led by Manitoba Premier Heather Stefanson, the premiers reiterated their desire to see Ottawa cover 35 per cent of health-care costs across the country, up from the current 22 per cent, by increasing the Canada Health Transfer.

Provincial health ministers presented the same demand to federal Health Minister Jean-Yves Duclos in Vancouver last month. But those talks ended without a deal, with Duclos saying provinces did not want to accept any conditions for the money.

Stefanson said it is time for the prime minister to negotiate an agreement in January.

"What we're calling for today is just a meeting to sit down with the prime minister to have the discussion about fair and sustainable funding for the future of health care in our country," Stefanson said at a news conference.

During a separate news conference on Parliament Hill, Duclos reiterated the federal government's willingness to work with provinces and territories on a long-term deal. However, he would not say if Trudeau would meet the premiers.

"The prime minister will obviously do what he wants to do," Duclos said.

"What he has asked me to do is to work with my colleagues, health ministers. ΓÇª Now we need premiers to let us do our job and express publicly the type of outcomes and results that we need to achieve together."

The impasse comes as many health-care facilities, particularly children's hospitals, are struggling with a shortage of staff and overwhelming demand as a result of a combination of COVID-19, influenza and respiratory infections.

It also comes as some provinces are facing rosier fiscal situations than expected, with a number projecting budget surpluses. That has prompted some, such as the Canadian Centre for Policy Alternatives, to question their demands.

The CCPA in a report last month projected that British Columbia, Alberta, Saskatchewan, Ontario and New Brunswick would have budget surpluses now and into the coming years that would help address some of the system's current problems.

Stefanson and others defended their position and accused Ottawa of unfairly dumping its obligations onto the provinces and territories at the expense of other priorities such as education and other services.

"What we see in these forecasts is that in the long term, the federal government will end up with surpluses and the provinces will increase their deficits because of the growing rate of increase for health care," said Quebec Premier Francois Legault.

Duclos said Friday that the federal government has been clear it is ready to contribute more to health care, but that Ottawa wants to know what results will be achieved with the additional funds before they are doled out.

"We first need to agree on the outcomes and the results we need to achieve together," he said. "So let's speak about the ends Γüá-- what we want to do Γüá-- and then assess the dollars needed from everyone, including the federal government, to achieve those results."

However, premiers have interpreted such talk as an attempt to dictate how money will be spent.

This report by The Canadian Press was first published Dec. 9, 2022.

A previous version of this story incorrectly reported the topic of the premiers' meeting.

Hybrid Parliament should be here to stay, say MPs in new report

The hybrid sitting structure and electronic voting system should become permanent features of the House of Commons, according to a new report from MPs on the Procedure and House Affairs Committee.

WHO declares COVID-19 global emergency isn't over. What happens next?

The World Health Organization decided Monday not to end to the COVID-19 global public health emergency it declared three years ago, even though the pandemic has reached what the international body calls an 'inflection point.'

The rebuild of the Vancouver Canucks has begun, with centre Bo Horvat heading to the New York Islanders.