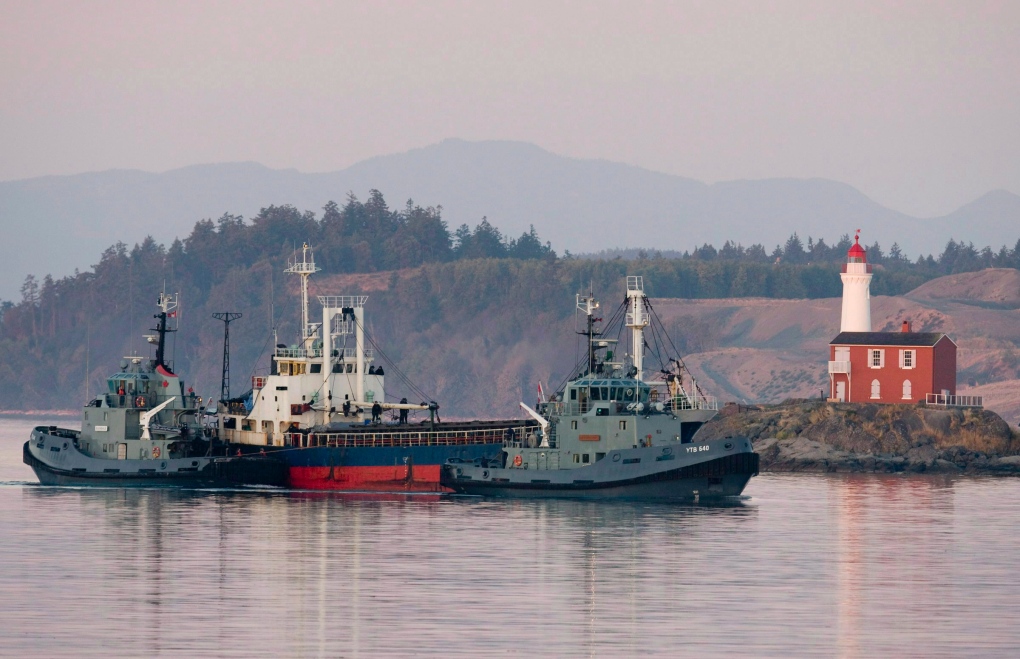 In this file photo, the MV Sun Sea is shown being escorted past Fisgard Lighthouse and into CFB Esquimalt in Colwood, B.C., Friday, Aug. 13, 2010. (Jonathan Hayward / THE CANADIAN PRESS)

VANCOUVER -- A young Sri Lankan man crammed into the cargo hold of a ship with nearly 500 others had only one thing on his mind -- getting to the promised land called Canada.

Nearly five years after the MV Sun Sea arrived on British Columbia's coast, the refugee claimant said he understands the plight of an estimated 1,700 migrants who have died in the Mediterranean Sea since April 13.

"I am extremely sorry to find that they had to die as a result of escaping from danger," said the man in his 30s, whose identity is protected by a publication ban.

But he said dying at sea was worth the risk for a shot at freedom, and it's the same chance that migrants heading from Africa to Europe are taking.

"I feel very strongly that the world has to open its eyes and prevent all these atrocities that are being committed by various countries so that there is no necessity for people to leave their countries, to take desperate measures to go elsewhere."

The man, dubbed B188 in Canadian government documents, said through a Tamil translator that he paid a smuggler in Thailand to travel with a group on two boats before they were transferred to the MV Sun Sea, which was already in international waters.

It followed the arrival of another ship, the MV Ocean Lady, in October 2009, with 76 Tamil migrants on board.

He said there were two toilets on the Sun Sea and that he would awake at 4 a.m. to avoid the lineups because he had trouble standing due to chest injuries he'd suffered in the Sri Lankan civil war during a bombing raid, allegedly by security forces.

"None of us were allowed to come to the top of the ship because some planes might spot us," he said.

"We couldn't even turn around when we were sleeping, there were so many people," he said, adding that during one violent storm, the passengers feared the ship would capsize in the middle of the night and they would all drown.

One man named Nesan died from dehydration and starvation, and the passengers held a funeral before his body was weighed down with engine parts and thrown overboard, he said.

"Hardly anybody cried. We were immune to death and we were prepared to die too, all of us."

He vomited often during the three-month journey that included little food and meagre rations of rain water, B188 said.

He was issued a deportation notice a year ago and is awaiting the results of a pre-removal risk assessment, hoping that Canada will become his permanent home.

European Union leaders are expected to hold an emergency meeting Thursday to address the current crisis.

After the arrival of the ships carrying Tamil migrants, the Canadian government funded international police in an effort to block such vessels from sailing to Canada.

In February, the Supreme Court of Canada heard arguments in a series of cases about the country's human smuggling laws, which a B.C. judge ruled were too broad and could even penalize refugees' family members or humanitarian workers.

Donald Galloway, a University of Victoria law professor, said governments should be doing more to resolve the reasons causing people to take such risks with their lives.

"The Canadian government's approach is, 'Let's bring out the heavy sticks and let's try and deter both the smugglers and individuals who rely on smuggling to enter into the endeavour,"' said Dalloway, who is also a member of the Canadian Association of Refugee lawyers.

Galloway, who was a lawyer with the Immigration Refugee Board when 600 mostly Chinese migrants landed on B.C.'s shores in 1999, said most of them were deported.

Others disappeared, likely to the United States, where they may be working in large cities such as New York to pay off smugglers, he said.