Poll: Canadians are most proud of universal medicare 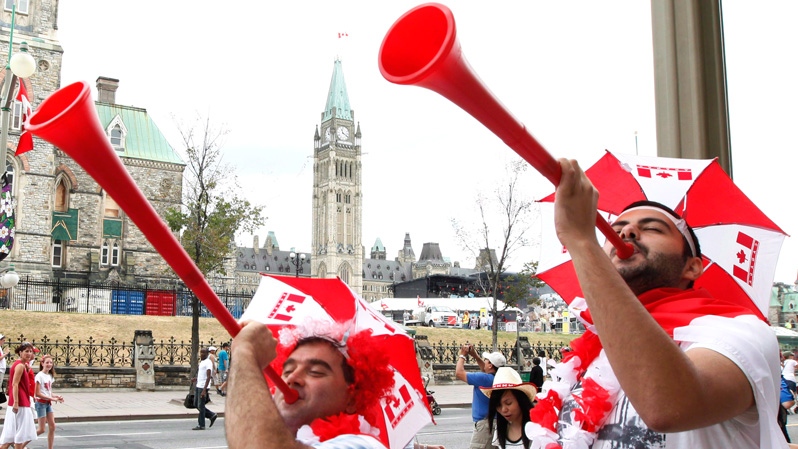 The monarchy? Not so much.

A new national poll commissioned by the Montreal-based Association for Canadian Studies examined the pride Canadians place in a list of more than a dozen symbols, achievements and attributes.

The online survey of 2,207 respondents by Leger Marketing found universal health care was almost universally loved, with 94 per cent calling it an important source of collective pride -- including 74 per cent who called it "very important."

The findings provide an interesting snapshot of the country after seven years under a Stephen Harper government that's made a priority of promoting its own blend of nation-building symbols.

The military, the Arctic, sports and the monarchy have been staples of Conservative messaging almost from the time Harper took office early in 2006.

More recently, the government has spent more than $100 million over the past four years on jaunty "economic action plan" advertising in concert with a constant refrain from Conservatives about Canada's relative prosperity in a battered global economy.

"The monarchy doesn't resonate well at all."

"It's about creating an environment where people are optimistic, and I think it's working, judging by these numbers," Jedwab said of Conservatives' economic messaging.

"That surprised me. I just didn't think it would be that high, because there are some economic challenges out there."

Canada's "reputation in the world" also fared well in the survey.

Canadian foreign policy has moved toward a more robust, warrior-state under the Harper government and away from the peace-keeping, "honest broker" persona that dates from the Lester Pearson Liberals of the 1960s. That's sparked some political controversy, but hasn't shaken Canadians' international self-image.

"We may have some family fights here at home, but when we step outside the house into the bigger world, we like to represent ourselves as Canadians," said Jedwab.

Rounding out the top four -- with 60 per cent calling it "very important" and nine out of 10 respondents deeming it important -- was the Charter of Rights and Freedoms.

"One of the ones that does really well -- the Canadian Charter of Rights and Freedoms -- is one the government was more hesitant about," said Jedwab.

The Conservatives consciously downplayed this year's 30th anniversary of the Charter, choosing to mark the occasion with a simple press release.

By contrast, the government has budgeted more than $28 million to mark the 200th anniversary of the War of 1812, a multi-year program that includes everything from TV advertising to upgrading historic sites and striking commemorative coins.

Alas, the historic series of battles between the British and the Americans came in near the bottom of the Leger online survey, albeit still far ahead of the monarchy in perceived importance.

Partisans keeping score might take solace that old Liberal standards, the policy of official bilingualism and the 1982 patriation of the Constitution, tied with the War of 1812 as a source of pride. All three were deemed somewhat or very important by 61 per cent of respondents.

Thirty-six per cent of respondents felt official bilingualism was of little or no importance to their pride in Canada, while 30 per cent were unimpressed with the War of 1812 and 25 per cent shrugged off Canada getting its own constitution.

While 68 per cent felt it was a source of pride, 29 per cent were left cold.

The middle of the pack was dominated by some familiar symbols.

The Canadian flag and the passport were sources of pride for 84 per cent of respondents, followed by the national anthem at 78 per cent.

The Armed Forces, another key Conservative theme, were deemed a source of collective pride by 76 per cent, just behind "our federal system of governance."

Only 48 per cent of respondents said the game imparted an important sense of national pride. The 1972 Summit Series, meanwhile, was even lower at 40 per cent.

"Our history" and the 1867 Confederation agreements rounded out the possible choices for survey respondents and did quite well.

Apart from some clearly "asymmetrical" responses from Quebecers on subjects ranging from official bilingualism to the War of 1812 and the national anthem, Jedwab said the survey shows a Canadian consensus.

"Canadians, by and large, there's pretty nice consensus about some of these issues."

The online poll surveyed Canadians in every province the week of Nov. 5 but does not include the traditional margin of error provided by telephone polling. Online surveys use self-selected respondents, making it impossible to come up with the kind of margin of error found in polls based on telephoned respondents.