Political violence in Canada a rarity, but also a reality 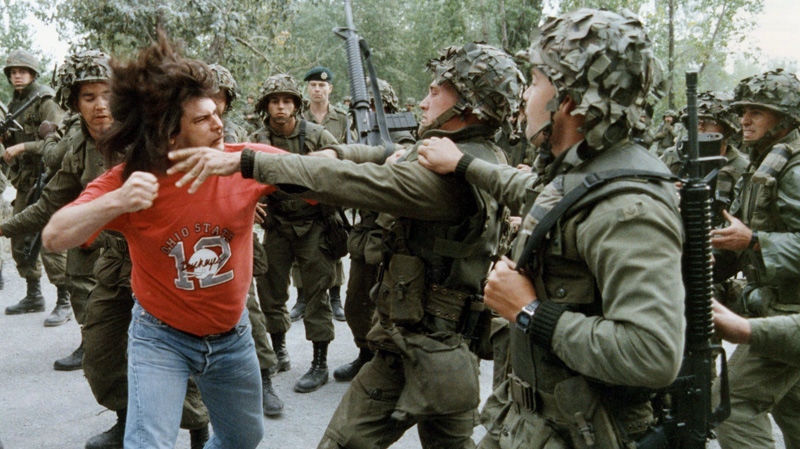 A Mohawk native winds up to punch a soldier during a fight that took place on the Kahnawake reserve on Montreal's south shore, Tuesday, Sept.18, 1990. (Tom Hanson / THE CANADIAN PRESS)

OTTAWA -- Whether or not the fatal shooting outside the Parti Quebecois victory party turns out to be related to politics, it serves as a pointed reminder that politically motivated violence in Canada is real -- if rare.

Orderly transitions to power after peaceful elections are the norm in this country. But there have been moments in the past when extremists turned to guns and bombs to make their points.

The 19th century saw rebellions in Lower Canada (Quebec) and Upper Canada (Ontario) in 1837 and 1838 and the Red River Rebellion and the Northwest Rebellion in Manitoba in 1870 and 1885.

In 1868, Thomas D'Arcy McGee was notoriously gunned down on an Ottawa street while returning to his rooming house just two blocks from the Commons chamber.

There was bloody labour strife in many cities in the early decades of the 20th century, with the Winnipeg general strike a standout. But that dust eventually cleared and political and labour struggles focused on ballots, not bullets.

Compared with the United States, where political violence seems ever ready to surge to the surface, Canada is a tranquil pond. But extremism has never disappeared.

Peter Graefe, a political science professor at McMaster University in Hamilton, said political violence faded from the western world in the last 100 years or so.

"You had this kind of grand compromise, where the working classes of the 19th century got a share of the pie," he said in an interview. "The political radicalism of the left, which fed some of the earlier political violence, died out."

The ruin of fascism in the Second World War made violence on the right wing untenable, he said. Generally, violence was seen as unacceptable.

"Our political system, for a long time, had a wide degree of political legitimacy so there wasn't much space for these expressions of violence."

Not that they died off completely. The FLQ mailbox bombings of the 1960s gave way to the 1970 October Crisis and the murder of Quebec cabinet minister Pierre Laporte. That anger was tamed into the Parti Quebecois, which fought its battles on the hustings.

There were lone nuts in Canada, as well.

Much like Tuesday night, the spectre of Quebec separatism was very much in play in 1995, too, when a knife-wielding intruder managed to get inside the prime ministerial residence while Jean Chretien and wife Aline were in their bedroom.

The intruder -- reportedly dismayed by the result of the 1995 referendum, which the No side won by a whisker -- was kept at bay by the couple's locked bedroom door, behind which Chretien later said he had armed himself with a soapstone carving.

In 1966, a man killed a security guard and blew up three American air force jets undergoing repairs at an Edmonton aerospace firm in what was supposed to be an anti-war protest.

In 1965, a disgruntled Paul Joseph Chartier walked into the Parliament Building in Ottawa carrying a bundle of dynamite which he apparently planned to toss into the Commons. But his bomb exploded in a washroom off the chamber, killing him and his plan to become prime minister.

Other stresses and strains erupted in over the years.

In the early 1980s, the so-called Squamish Five staged a series of bombings, including a blast at a Litton Industries plant in Toronto.

In 1990, the Oka crisis left a policeman dead and produced a 78-day standoff with natives.

Some violence was an echo of overseas. In 1982, a Turkish diplomat was shot and injured in Ottawa in April and a second was shot and killed in August. No one has ever been apprehended in the death of Col. Atilla Altikat.

So the possibility of violence is there.

Graefe, however, said he believes that the Montreal shooting is more akin to the Norway massacre of 2011, fuelled by some angry electoral rhetoric blown out of proportion.

"It's a situation where you do begin to have some of these ideologies which really begin saying there's certain enemies of the state within or the state itself cannot be trusted," he said. "It provides a kind of basic justification for people in that situation to act in that way."

Graefe cited the Tea Party movement in the United States as an example of the sort of frustrated, opposition-oriented grassroots movement where some individuals might interpret angry rhetoric the wrong way and act out violently.

The Tea Party "feeds in its own right off some white extremist movements where you've got people who are openly putting into question whether the state is some sort of representative of the collective interest -- in fact, they see it as some kind of oppressor," he said.