PM says he did 'nothing' to influence WE deal; top aide aware of perceived conflict

OTTAWA -- Prime Minister Justin Trudeau has denied any direction or attempt to influence from him or his office in the WE Charity affair, though he and his top staffer Katie Telford have testified that the Prime Minister’s Office was aware early on of the perceived conflict Trudeau had in granting the now-likely cancelled $912 million student volunteer grant program.

Trudeau told MPs during his rare parliamentary committee appearance that he put off a key cabinet decision on allowing WE Charity to run the program after he learned the organization was involved.

“WE Charity received no preferential treatment, not from me, not from anyone else. The public service recommended WE Charity, and I did absolutely nothing to influence that recommendation… When I learned that WE Charity was recommended, I pushed back,” Trudeau said.

The prime minister testified that he and Telford, his chief of staff first became aware that WE Charity was formally being put forward as the best pick for the $912 million student volunteer grant program on May 8, hours before cabinet was supposed to decide on allowing them to administer the program. Trudeau said that he moved the item off the agenda so further scrutiny could be made on the deal.

"We both felt that we needed more time before this item was presented to cabinet, trying to consider and understand the reasons behind the proposal that WE Charity deliver the program. On that issue we had several questions that we wanted answer, particularly given my specific expertise in youth issues,” Trudeau said.

Trudeau said that until May 8 he had not spoken with any of his staff about WE, nor had he spoken to WE Charity officials about the program. It went through the cabinet COVID-19 committee on May 5, but Trudeau was not involved.

The prime minister also testified that he was aware the WE connections to his government would be closely scrutinized and lead some to wonder whether those connections played a role in the decision, so he wanted to make sure the public service backed up their recommendation that it was WE or nothing. That assertion came on May 21, Trudeau told MPs, though he never addressed why -- given his acknowledged close ties -- he did not recuse himself from that meeting.

“We wanted to make sure that the process and decision were the best possible in the circumstances,” Trudeau said.

Elaborating on the perceived conflict, Telford—during her two-hour appearance before MPs—said Trudeau was concerned about a “perception” of a conflict of interest.

“You've heard the prime minister say that he regrets not recusing himself. I have regrets about that, too. Obviously this didn't happen as we intended to. This is not what we had envisioned, and I share that responsibility,” she said.

The prime minister has also informed MPs that given the ongoing controversy, the student volunteerism program is “unlikely” to get off the ground this summer. After WE backed away from the deal a month ago, it was put back in the hands of the public service and it’s yet to be re-launched.

“Getting young people to serve has been a goal of mine well before I ever got into politics, so I deeply regret how this has unfolded,” Trudeau said.

The prime minister began his testimony saying that in drafting the now-controversial program, time was of the essence, and a priority that superseded perfection. He had hoped the existing Canada Service Corps would be able to scale up and run the program, but public servants with the Department of Employment and Social Development told him that was not possible, to his disappointment.

She also told MPs that no one from the PMO was involved in the negotiations around the contract, called a “contribution agreement,” sealing the WE deal.

Both also testified that while they were aware of aspects of Finance Minister Bill Morneau’s connections to the charity, they were not aware of the extent of it.

PM GRILLED ON DUE DILIGENCE OF DEAL

Trudeau fielded a barrage of opposition questions on what he knew when, and his family’s involvement with WE Charity. Prior to the meeting, setting up their expectations for the much-anticipated summer sit down with the prime minister, both the NDP and Conservatives said their main intention was to get at the truth with Trudeau.

Over his hour-long appearance MPs asked why WE was chosen despite the internal issues the charity was reportedly facing, the total extent of payments and involvement Trudeau’s family has had with WE over the years, and whether any of his Liberal cabinet ministers will be held accountable in this scandal.

“Who are you going to fire?” asked Conservative MP and ethics critic Michael Barrett, repeatedly asking Trudeau how many ethics breaches it would take for he or his ministers to step aside and take responsibility.

Trudeau was also repeatedly asked why he was not aware of the internal issues with WE prior to granting them the deal. Opposition MPs were puzzled by what apparent extra due diligence was done, as Trudeau requested, suggesting a deep look at the charity should have revealed that information.

In an exchange with NDP MP Charlie Angus, Trudeau sought to dispel the problematic nature of the program as it was designed offering payments for time worked that added up to less than minimum wage.

“Not a dime has gone out the door,” Angus said.

“People get out and volunteer not for money but because they want to make a difference in the world and if you start calculating every volunteer as working for less than minimum wage, then you are missing a really important part,” Trudeau responded.

He was also asked if WE really was the best choice, to which Trudeau said: “We’ll never know.”

Seeking to defend his family’s connections, Trudeau said that his mother has been speaking about mental health since 2010, dispelling the idea that her getting paid for that advocacy was connected to his political ascent. He also said in regards to his wife Sophie Gregoire Trudeau’s podcast under the WE banner, it was cleared by the ethics commissioner for her to host the program and claim expenses for it.

Conservative MP Michael Cooper said it was “inexplicable” why Trudeau wouldn’t think to get ethics clearance in regards to the student grant program. “It just doesn’t add up.”

There was also an indication that the opposition will be looking to call more witnesses, including a policy staffer in Trudeau’s office, who Telford said spoke to WE about the grant program around the time the charity began working ahead on it in early May, despite that chat happening weeks before the deal was signed off by cabinet.

Without specifics, Telford said there were “a handful” of interactions ahead of the program launch in which members of the PMO spoke with WE Charity officials.

“There was some back and forth, that is perfectly normal and actually expected around the time of the launch of the program,” Telford said.

Prior to the committee hearing, the Conservatives had threatened that if they felt like they hadn’t received the full disclosure from Trudeau, they’d be looking to call him back in the months ahead.

The tense and often combative meeting had a moment of brief levity and technological chaos when Liberal MP and committee chair Wayne Easter’s power went out, meaning that as vice-chair, Conservative MP and finance critic Pierre Poilievre took control, giving himself the floor to demand more answers from Trudeau. 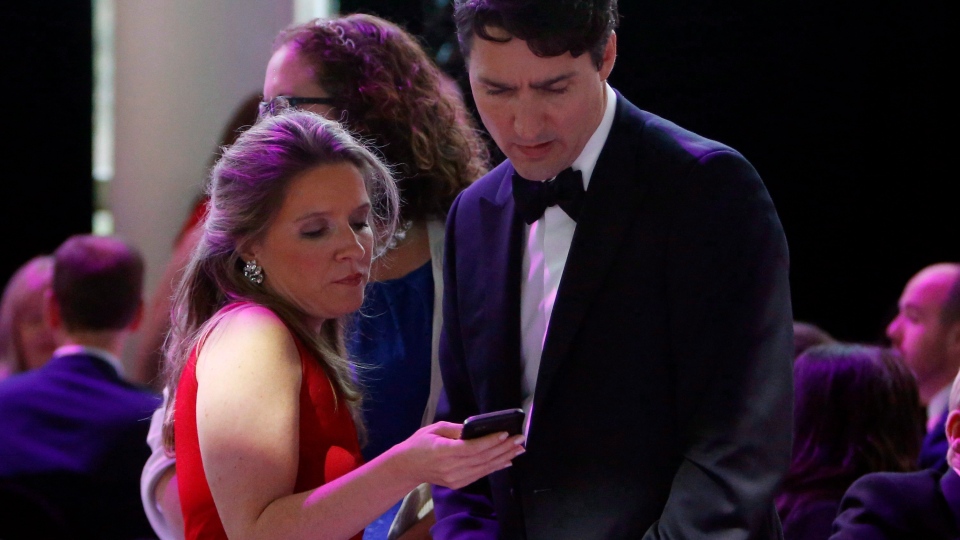 Opposition MPs had asked for Trudeau to stay for three hours, but he agreed to appear for an hour and a half before the House of Commons Finance Committee, through the new normal -- a virtual committee meeting over Zoom. Telford testified for two hours.

The suggestion to stay longer comes after the four-hour appearance of WE co-founders Craig and Marc Kielburger on Tuesday, when the brothers denied they were chosen to run the program because of any political connections and offered several new details about the entire affair, including denying a string of reported accusations of improper conduct within their self-described “labyrinth” organization.

The brothers also testified that the advanced work WE did to get the program running before it was announced, was done on their own volition.

HOW DID WE GET HERE?

The entire affair centres around the Canada Student Service Grant, which was first announced in late April, offering students $1,000 for every 100 hours of volunteer work on COVID-19-focused community projects over the summer.

It was late June when Trudeau announced WE would be running the program, but by early July they had pulled out amid questions about nearly $300,000 in payments to Trudeau’s mother, brother, and his wife, for speaking engagements with the charity over the years. WE's co-founders later confirmed that thousands more had been paid in expense reimbursements to the three for their appearances.

In the month that has passed since the program was put on ice, revelation after revelation has kept the scandal alive, while the program remained halted. From the $43.5 million that WE was set to receive to run the program and the advanced work they were doing before the ink was dry on the deal, to the involvement of Morneau in the student grant program’s infancy, his daughters’ ties to the charity, and his family’s past “complimentary” WE trips, for which he just recently reimbursed the charity more than $41,000.

Both Trudeau and Morneau were at the cabinet table and did not recuse themselves when the student grant program was being discussed. For that, they have both offered apologies and pledged to be more proactive in recusing themselves going forward to avoid the same mistake.

At the end of Thursday’s meeting, referencing the testimony given, the opposition MPs on the finance committee voted to request that the PMO release all the names of PMO staff members who communicated with WE, the Kielburgers or any affiliates of WE since March 1, and that the PMO provide the dates, participants and contents of those meetings.

The Liberal MPs on the committee voted against the motion, calling it not a “useful exercise” and “scraping the bottom of the barrel.”

In contrast, NDP MP and finance critic Peter Julian classified the hearings so far as providing “revelation after revelation.”

“It's very clear that as this has gone along, massive amount of revelations have come in around the finance minister, around the prime minister's involvement, and around the complete lack of due diligence in this mess,” he said.

In addition to the finance committee probe, two other House committees have agreed to take up studies into various aspects of the controversy, including looking into the Conflict of Interest Act aspect of the scandal and whether changes are needed to put up stronger conflict of interest shields in the Prime Minister’s Office.

Federal Ethics Commissioner Mario Dion has already launched investigations into possible conflict of interest code breaches by Morneau and Trudeau for not recusing themselves from the cabinet discussions about outsourcing the grant program to WE, given their close family ties.

On Wednesday evening, Dion’s office confirmed it has expanded its probe of Morneau to include the committee revelations from the finance minister about his family’s gifted travel.

The conflict of interest rules prohibit federal public office holders or members of their family from accepting “any gift or other advantage, including from a trust, that might reasonably be seen to have been given to influence the public office holder in the exercise of an official power, duty or function.”

This is the third time the prime minister has been investigated for possible ethics breaches. In the first two instances — his Aga Khan private island vacation and the SNC-Lavalin scandal — he was found to have broken the rules.

We're launching a new newsletter. Nightly Brief is a new curated newsletter on the day's most important news. Receive interesting opinions, fresh analysis, and must-watch video, delivered to your inbox every weeknight.