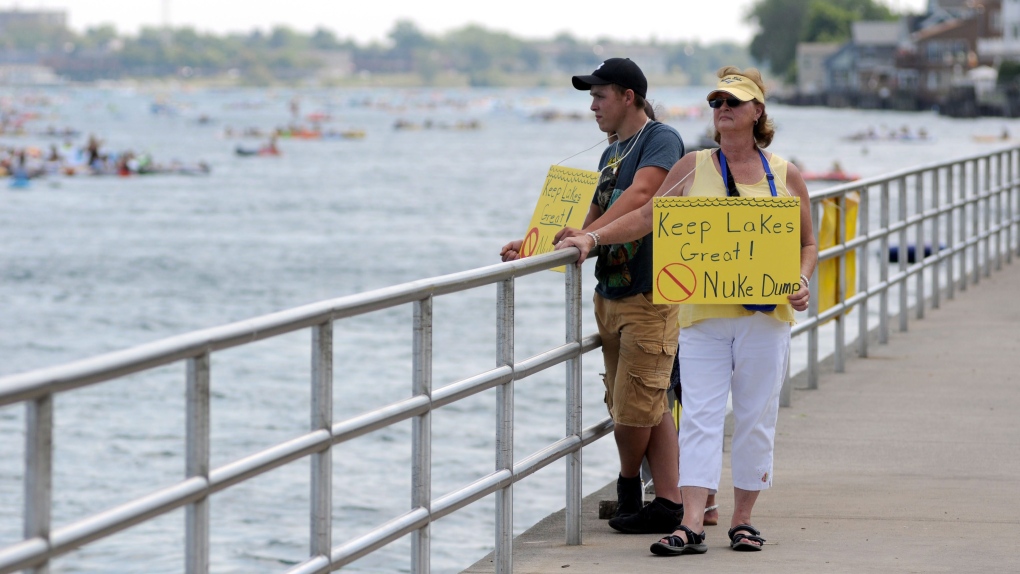 Jan Thomas, of Port Huron, holds a sign protesting a proposed nuclear waste dump site on Lake Huron, Sunday, Aug. 16, 2015, as participants in the float down pass by during International Rally to Protect the Great Lakes at Pine Grove Park in Port Huron, Mich. (Andrew Jowett/The Times Herald via AP)

TORONTO -- A group opposed to a plan to bury nuclear waste near Lake Huron says it has sent a petition with more than 90,000 signatures to federal Environment Minister Catherine McKenna.

Beverly Fernandez of Stop the Great Lakes Nuclear Dump says the petition -- which would have required 6,754 pages to print -- had 92,251 signatures and more than 31,000 comments when it was emailed to McKenna earlier this week.

Ontario Power Generation wants to bury hundreds of thousands of cubic metres of waste from nuclear plants about 680 metres underground at the Bruce Power generating station near Kincardine, Ont., about 1.2 kilometres from Lake Huron.

OPG has said the waste would not include highly radioactive spent fuel, but would consist of "low-level" waste such as ashes from incinerated mop heads, paper towels and floor sweepings, and "intermediate waste" -- discarded parts from the reactor core.

Fernandez says more than 180 resolutions have been passed on both sides of the Canada-U.S. border condemning the plan, and she claims the resolutions represent about 22 million people.

A Canadian environmental assessment released last May concluded the OPG plan was the best way to deal with the waste, and found little risk to the lake. Former environment minister Leona Aglukkaq had promised to make a decision by last Dec. 2, but the new Liberal government has put it off to March 1.

McKenna did not immediately respond to a request for comment on the petition.

An OPG spokesman said that the government "should follow the science."

The advisory panel said it should be built, "and be built now, and that it won't affect the lake," Neal Kelly, an OPG spokesman, said Thursday.

The 430-page environmental assessment report concluded "the relative position of the proposed project within the spectrum of risks to the Great Lakes is a minor one, albeit one that demands strict attention and regulation."

"Protection of the Great Lakes from buried radioactive waste is responsible stewardship, and is of national and international importance," the group said in a release.

Proponents argue the rock is geologically stable and would provide a hermetic seal to prevent any radioactivity reaching Lake Huron from the proposed deep geological repository or DGR.

Last year's environmental report also rejected a major concern of those opposed to the plan: that the repository could also become home to the dangerous high-level waste such as the spent nuclear fuel that powers the reactors.

"A used fuel repository would have distinctive design requirements different than the DGR and would require a separate environmental assessment and licence application," the report stated.

The report concluded the "international consensus" was that burying the waste is preferable to storing it above ground, as OPG has done for decades, because the repository would be less vulnerable to natural and human-caused disasters.

And it urged burying the waste as quickly as possible.