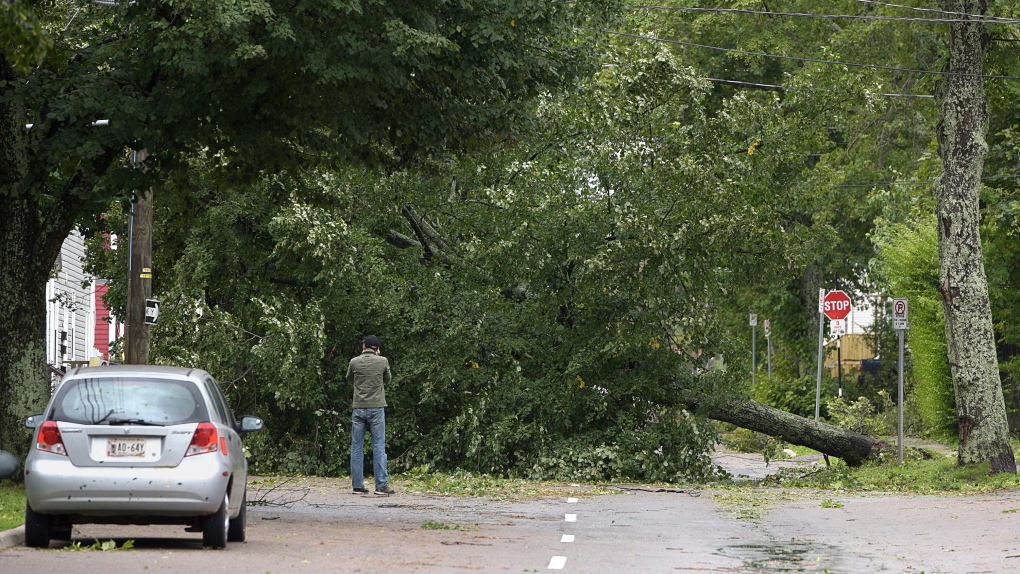 An unidentified man takes a photo of a fallen tree in Charlottetown on Sunday, Sept. 8, 2019. (THE CANADIAN PRESS/Nathan Rochford)

CHARLOTTETOWN -- Much of Prince Edward Island National Park has reopened to the public after it was hit by post-tropical storm Dorian last weekend, but Parks Canada's incident commander said Friday some parts won't open again until next year.

The worst-hit area of the P.E.I. national park is near the Cavendish campground, which will be closed for the rest of the year, he said.

"Some of these areas are so heavily damaged we have yet to be able to get our crews in there to start to assess it," Romaniuk said in an interview.

Romaniuk said crews from other national parks have assisted to reopen the Green Gables House and visitor centre, the parkway, Brackley Beach and Cavendish beach.

The Stanhope campground is closed for the season and all trails at Green Gables Heritage Place will remain closed until further notice.

"Like with most hurricanes that come through here, the shoreline was heavily impacted," he said. "In some cases we lost three-to-five metres of the shore. We had very strong and high waves that came through."

Romaniuk said the storm surge even impacted a number of inland ponds.

He said crews will have to replace some stairs and ramps in some of the dunes, but he added the beaches tend to repair themselves.

Some beaches are narrower than they were before the storm but Romaniuk said others are now wider because of sand deposited there.

Despite the extensive damage, Romaniuk said the entire park will be ready for visitors again next season, but some parts will look different due to the storm.

Maritime Electric said as of Friday afternoon, more than 3,300 homes and businesses were still without power on Prince Edward Island.

-- By Kevin Bissett in Fredericton.