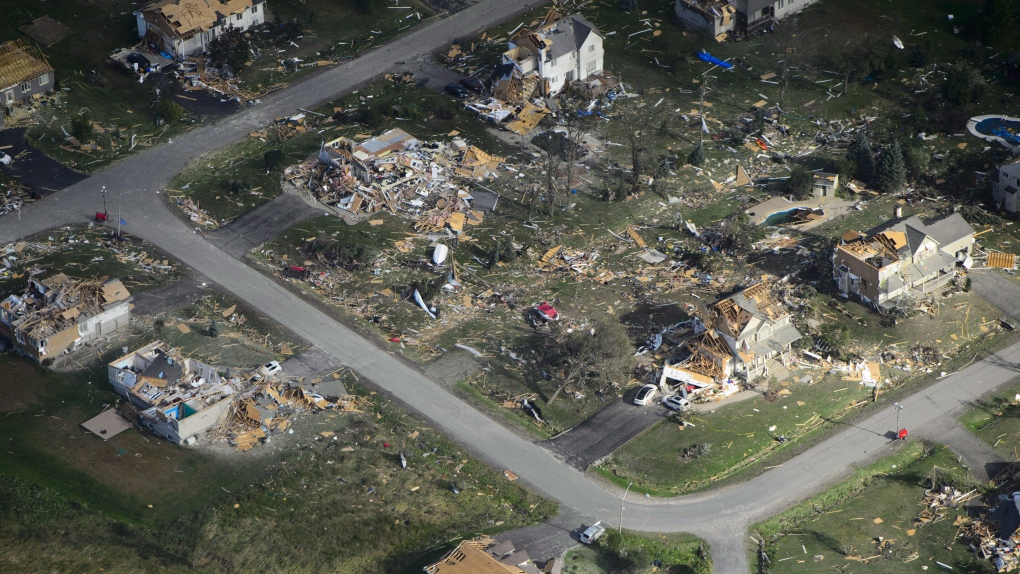 Damage from a tornado is seen in Dunrobin, Ont. west of Ottawa on September 22, 2018. THE CANADIAN PRESS/Sean Kilpatrick

It has been one year since multiple tornadoes ripped through the Ottawa-Gatineau region, causing extensive damage to homes and neighbourhoods.

On Sept. 21, 2018, six tornadoes touched down, destroying or severely damaging more than 50 homes. Reports at the time from Environment Canada said that one of the tornadoes that touched down in the Dunrobin neighbourhood of Ottawa was a EF3 tornado -- the most powerful tornado seen in eastern Ontario since 1901.

Over the past year, there have been 111 applications for Ontario recovery assistance, 92 have been rejected, nine have been approved and 10 remain open.

For some, the reconstruction efforts come with additional difficulties. Former Paralympian sledge hockey player Todd Nicholson opted to utilize hurricane reinforcements for his rebuilding efforts to reassure his family, after the tornado tore through their home.

“We had quite a collection of stuff,” Nicholson said to CTV News’ Molly Thomas in Dunrobin. “But we realized very quickly that this is just stuff.”

The sense of community in the wake of the tornadoes provides an important pillar of support for victims. The “Tornado Moms” gather together to “compare stories and talk about issues that are happening,” such as insurance, one woman said.

In the neighbourhood of Arlington Woods, Linda Willman replaced her uprooted pine trees with a towering maple, saying that it represents “hope for some of the beauty to return” to the area.

“We’re all planting trees, which is so heartwarming and now in 10 years, it will be similar.”