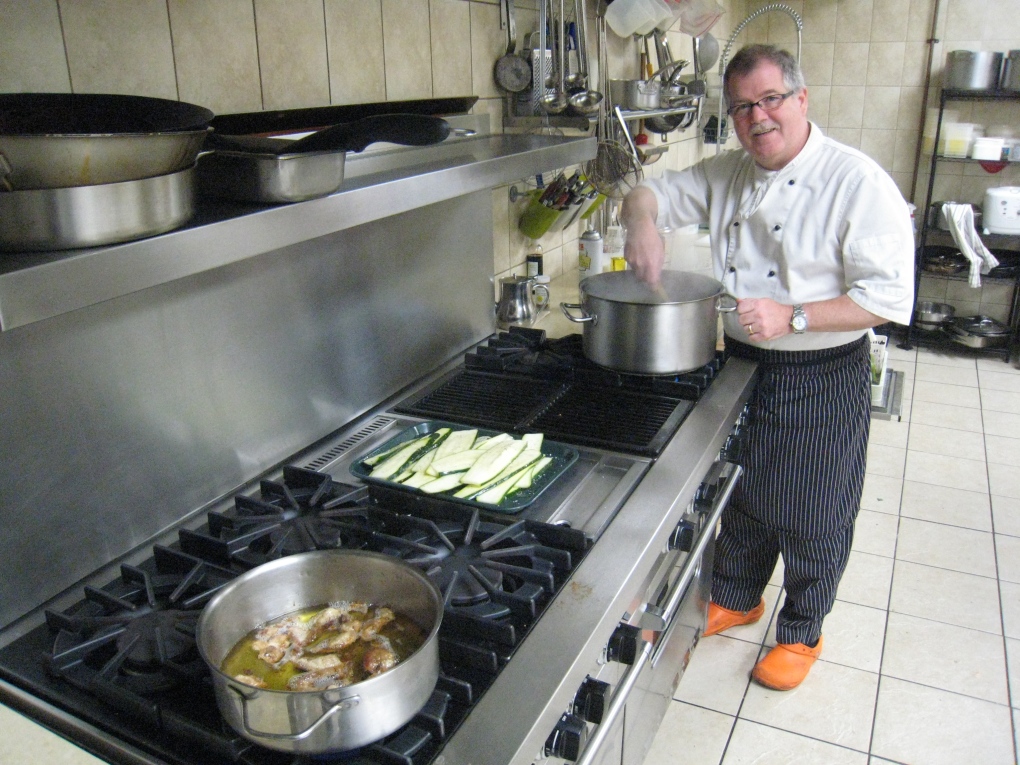 (OTTAWA-AFP) -- A curious Ottawa chef believes he has stumbled on the origins of Canadian cuisine while researching dishes to commemorate French explorer Samuel de Champlain's travels 400 years ago.

As with most nations in the Americas, Canadian cooking today has been influenced by centuries of immigration, but chef Marc Miron thinks there is also a common, underlying food tradition.

Modern Canadian cuisine varies from region to region, influenced by British and French colonists and subsequent waves from Europe, Asia and the Caribbean.

But Miron says he traced its roots to the cargo carried by Champlain, the famed navigator and founder of the New France settlement.

The ingredients brought from Europe four centuries ago are still to be found, he told AFP, in "Habitant Pea Soup," a hardy meal which now features dried yellow peas with salt pork and herbs.

"When they came to Canada, they didn't know what to expect so they loaded up their boats with dry beans, cured meats and salted fish; ingredients that would travel well and were nourishing," he said.

"That would lead to the beginnings of Canadian cooking, with a strong French influence," he said.

Miron, who worked 20 years as executive chef for the Four Seasons hotel chain before returning to Ottawa in 2007 to open a gourmet food shore, said Champlain had also befriended local aboriginals.

"The people he met here would have influenced what he ate," he said.

'Hunting with the natives'

While in Canada Champlain would have replaced the fish that his mariner family was used to with wild game such as hare and caribou. "He would have gone hunting with the native peoples," said Miron.

The aboriginals he encountered also ate a lot of wild berries, and shared this knowledge with him. This is the origin of a Canadian-style fruit frangipane, Miron argued.

This month, Miron's Cuisine & Passion gourmet shop is offering a taste of what Champlain ate to coincide with the city of Ottawa's Champlain celebrations.

"I thought, 'We should do something very special like recreating what they ate during that time," he said.

Miron tapped into government funding in order to offer cooking classes at reduced prices, but researching 17th century gastronomy proved to be an arduous task.

"We know that French cuisine really started in the 1800s with people like Careme, Escoffier and others that started documenting recipes and structuring the way we eat now into courses," he explained.

"Previously it was hard to find written recipes."

Miron said he pored over historical documents and old books to find the odd mention of foods people ate during this era, and then tried to correlate them with recipes passed on from generation to generation.

A Canadian fan of the British television series "Downton Abbey" undertook a similar investigation for a cookbook based on the early 20th century cuisine featured in the show, including recipes for apple charlotte and roast chicken.

Ottawa's Fairmont Chateau Laurier also served a meal from the menu of the Titanic during last year's commemoration of the tragic sinking in 1912.

Food is a great link to the past, as well as a delightful guide to foreign cultures when travelling, said Miron.

"You learn a lot more at the market about the local culture than you would at a shopping mall," he said.