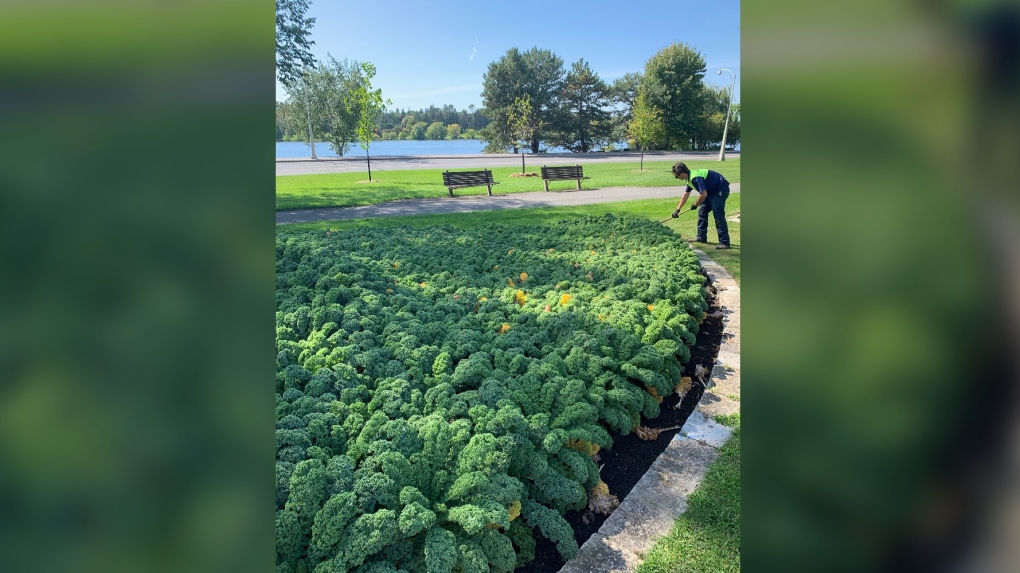 Vegetables planted at Dows Lake along the Rideau Canal in Ottawa. (Darnell Kennedy)

Vegetables planted along the Rideau Canal are not meant to be consumed by humans, the Crown corporation behind the project says, even though some of them were once donated to a food bank.

The National Capital Commission has been planting kale and brussels sprouts around Dows Lake, a small man-made lake on the Rideau Canal, since 2014.

Ottawa resident Darnell Kennedy recently noticed the plants while he was taking his dog for a walk.

He contacted the director of plant bedding at the NCC to ask about its plans for the food and he claims he was told that it was meant for food banks but would not be suitable for people as it was contaminated with canal water. Instead the food would be composted, he was told.

“She explained it was a good intention, to plant all these vegetables and donate it to local food banks,” he told CTVNews.ca in a phone interview.

“But the food won’t be safe. Did they not do the research? It’s a terrible thing. It’s so much money, so much food. The banks will be busy as children go back to school and they will have (food) shortages.”

In an emailed statement to CTVNews.ca on Thursday, the NCC claims “these displays are not meant to support plants for human consumption,” but admits in the first year of the annual program vegetables were offered to a food bank.

“Yes, in the first year, at the end of the life cycle, the NCC offered some vegetables to the food bank,” the statement reads.

“However, since the site was a lumberyard in the late 1800(s) to early 1900(s), we decided to discontinue this practice out of caution. The kale and brussels sprouts from this particular display will be composted and used as fertilizer.”

The vegetables were donated to a food bank once in 2014, the NCC confirmed, and the goal of planting the vegetables “was and is ornamental.”

“In 2014, after the harvest, they (food banks) were made aware of the information received about the grounds having been a lumberyard a century ago,” a NCC spokesperson told CTVNews.ca in an emailed statement Friday.

“Since, though the risks to human health were deemed negligible, preferring an abundance of caution, discouraging human consumption has been and is still being recommended.”

The NCC told CTVNews.ca that it leases upwards of 70 farms on the land it manages.

“The cost of planting vegetables in some flower beds is not isolated from the overall stewardship budget for the hundreds of flower beds the NCC showcases from spring to fall in Canada’s capital core,” the statement read.

The NCC added there “are no extra costs associated” with the vegetable planting in question.