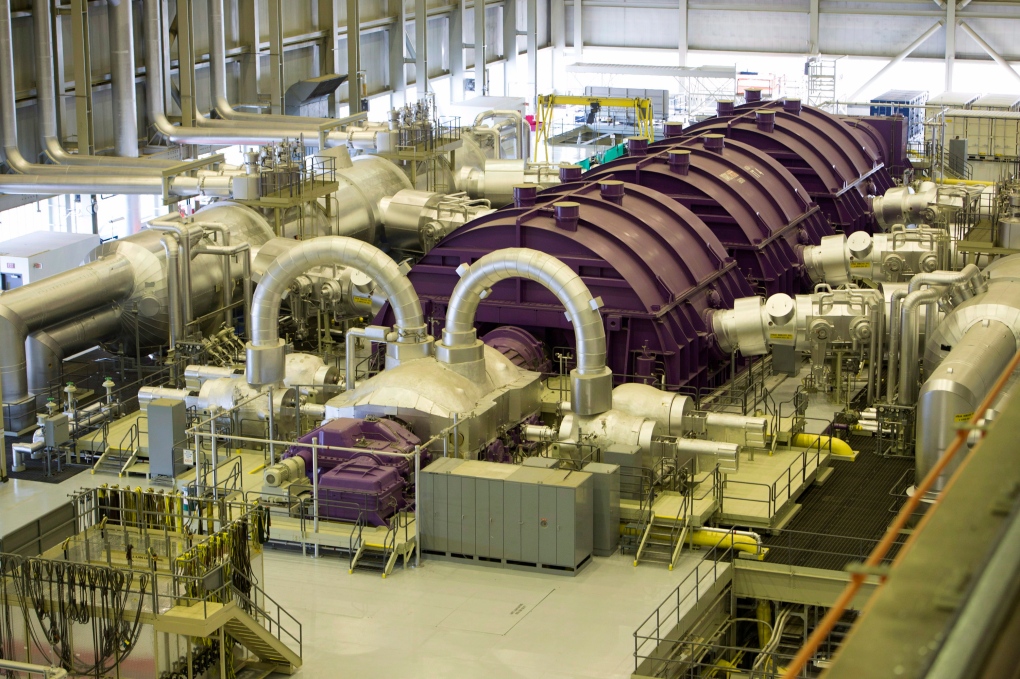 A steam turbine at the Darlington nuclear facility in Courtice, Ont., on Thursday, Oct. 30, 2014. (Frank Gunn / THE CANADIAN PRESS)

TORONTO -- Ontario Power Generation announced plans Monday to start a $12.8 billion refurbishment of the Darlington nuclear power station this fall and to squeeze four more years out of the aging reactors at its Pickering generating station.

Nuclear reactors at both generating stations -- situated east of Toronto on Lake Ontario -- were originally scheduled to be decommissioned in 2020, but the Liberal cabinet decided to keep operating two units at Pickering until 2022, and the other four until 2024. The decision still needs approval from the Canadian Nuclear Safety Commission.

Energy Minister Bob Chiarelli said extending the life of the Pickering nuclear units will save the province about $600 million, which will help keep increases in electricity rates to a "modest, acceptable" level.

"Prices will not go down in absolute terms in most, if not all, jurisdictions in North America, if not the world," he said.

The Darlington project will extend the life of its four reactors by another 30 years.

Cabinet approved the refurbishment of one reactor starting this fall, but OPG will have to get approval for each of the three other units as they too are rebuilt.

Those cabinet approvals give the government options, or "off ramps," to halt the refurbishment project if it doesn't like the way things are progressing or if innovations produce cheaper, more efficient ways of generating electricity, added Chiarelli.

"The province has the discretion automatically for off ramps, and there are a number of occasions when they are for cause, which means they're not on time, they're not on budget and we don't have confidence moving forward," he said.

The Darlington budget includes a $1.7 billion contingency fund in case of cost-overruns on the $4.5 billion portion of the project done inside the reactor itself -- the nuclear science work deemed as "subject to execution risk" -- versus the fixed contracts for the majority of the supporting infrastructure.

OPG president and CEO Jeff Lyash said the government-owned utility has been preparing for the Darlington refurbishment since 2009.

"We are ready to go, and we'll deliver the job safely, at the highest level of quality, on time and on budget," said Lyash.

OPG estimates it would need between 7.2-to-8.1-cents-per-kilowatt-hour to recover the total cost of the refurbishment, below current averages of 9.2 cents-per-kwh, but more than the 6.57-to-7.7-cents-a-kwh privately owned Bruce Power will be paid.

Bruce announced plans last month for a $13 billion refurbishment of six reactors at the generating station it operates under contract in Kincardine, starting in 2020 -- four years later than originally planned -- but the company assumed all risks of overruns.

Ontario's Progressive Conservatives said it makes sense to extend the life of the Pickering while Darlington is being rebuilt, but they want the government to keep a close eye on costs so ratepayers aren't on the hook for overruns.

"The responsibility is incumbent upon the province to ensure that there are checks and balances and proper oversight to ensure that the refurbishments do come in on budget," said PC energy critic John Yakabuski.

The New Democrats want an independent review of the Darlington refurbishment.

"This government has not provided a proper business case that clearly and transparently examines the costs, benefits and risks of this project," said NDP energy critic Peter Tabuns.

Green Party of Ontario Leader Mike Schreiner called it "outrageously irresponsible" for the Liberals to commit to rebuilding nuclear plants without an independent public review on costs and alternatives such as importing more power from Quebec.

Premier Kathleen Wynne said Ontario is looking at importing more electricity from Quebec and Manitoba, but made it clear she wants to keep generating about half of the province's electricity from nuclear power.

"We don't have any plans to move away from nuclear as our baseload at this point," she said. "It's always between 40 and 50 per cent."

Chiarelli said it's not economically feasible for Ontario to replace the power generated by Darlington with electricity imported from Quebec because it would require billions of dollars in upgrades to transmission lines and transformer stations.

"It's not affordable because the amount of infrastructure required makes it absolutely prohibitive to move forward with it," he said.