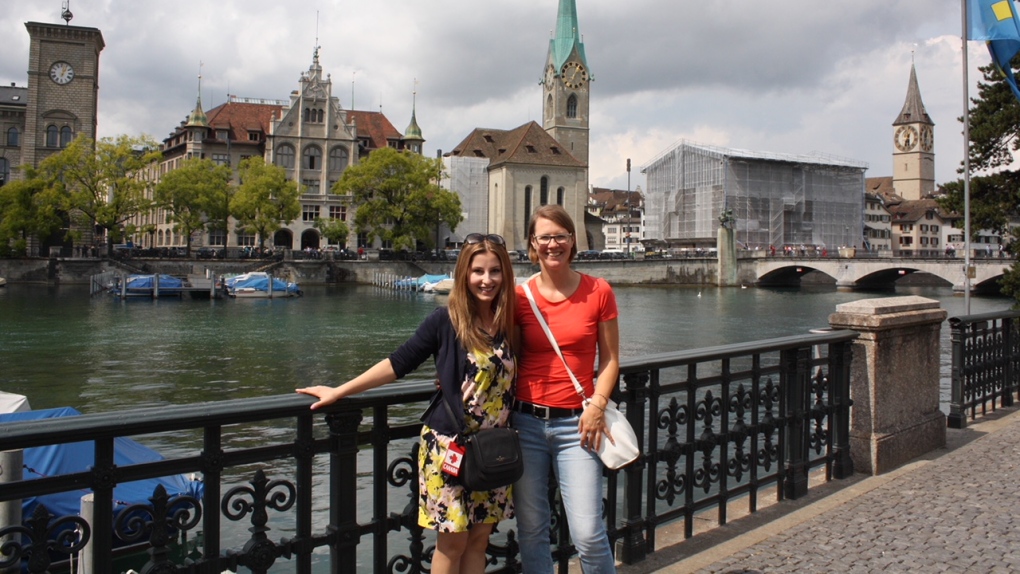 A year and a half after being saved from drowning by a stranger in the Middle East, a mother of two from Barrie, Ont., was finally able to track down and meet her rescuer.

In Feb. 2017, Suha A. was travelling with her husband in Oman for a wedding when they decided to visit Wadi Shab: a precipitous desert gorge that contains stunning turquoise pools and plunging cascades. After a short boat ride and an hour’s hike, Suha and her husband swam into a cave through a small crack in the rock face to see the site’s most spectacular waterfall -- a place Suha describes as “gorgeous.”

A small group was exiting at the same time, but one of those women fortuitously decided to linger a little longer in the picturesque grotto.

“At that point, I got tired as soon we entered the cave,” Suha recalled in an interview with CTVNews.ca. The current, she later learned, had intensified because of recent rainfall.

“I tried to rest by finding some kind of ledge or something on the wall, but it was extremely smooth and slimy at the same time,” Suha said. “I just told my husband, ‘I can’t, I can’t.’”

Struggling against the fast-moving water, Suha tried in vain to reach a rope placed near the waterfall.

“At that point, I just started drowning,” she said. “The water was too strong. I panicked.”

Suha says she was ready to give up. Her husband, meanwhile, was fighting against the tumultuous water too. Watching her falter, he shouted, “My wife! My wife!”

That’s when the stranger leapt into action.

“He says that she swam over to me like a bullet,” Suha said. “I started swallowing water instead of breathing and then she pulls me out, and next thing I remember is I was on my back, floating… She swam me out of the tiny little crack.”

Clinging to a rope outside the cave, she called after her departing rescuer.

“As she was swimming away to the land, I just said, ‘What’s your name?’ and she said, ‘Patrizia,’” Suha recalled. “And I said, ‘Where are you from?’ and she said, ‘Switzerland,’ and then that was the last I saw of her.”

The shock of the incident still lingers to this day, Suha says -- and she never stopped thinking about the woman who saved her life.

“If it weren’t for her, honestly, we would have died for sure,” Suha said. “Because there was no else and it’s literally in the middle of nowhere and there’s no cell reception -- there’s nothing.”

A year and a half later, as Suha’s husband was about to head to Munich, Germany, for a conference, the woman decided that she finally wanted to track down her saviour.

“Switzerland is right next to Germany, so I’m like, ‘You know what? I’m just going to go for it,’” Suha said.

After sharing her story online on Facebook and Reddit two weeks ago, Suha reached out to three Swiss news outlets. Soon after, a friend of Patrizia’s read one of those stories and helped connect the two women.

On Aug. 24, Suha finally met Patrizia in Zurich, Switzerland. Humble to the core, she learned that Patrizia has rarely spoken about that fateful day. She also discovered that Patrizia learned her life-saving skills as a member of a swim club.

“I’ve already invited her back to Canada,” Suha said. “I gave her maple syrup and another gift, just as a token from Canada. We hit it off immediately.”

In another stroke of fate, both women, aged 33, learned that they share the exact same birthday.

Although she’s still loath to swim in natural bodies of water after the “traumatic” episode, Suha now has a new friend -- and a message.

“If you are in this kind of situation, just remember there’s an option called floating,” she said. “Be calm. Panic kills.”