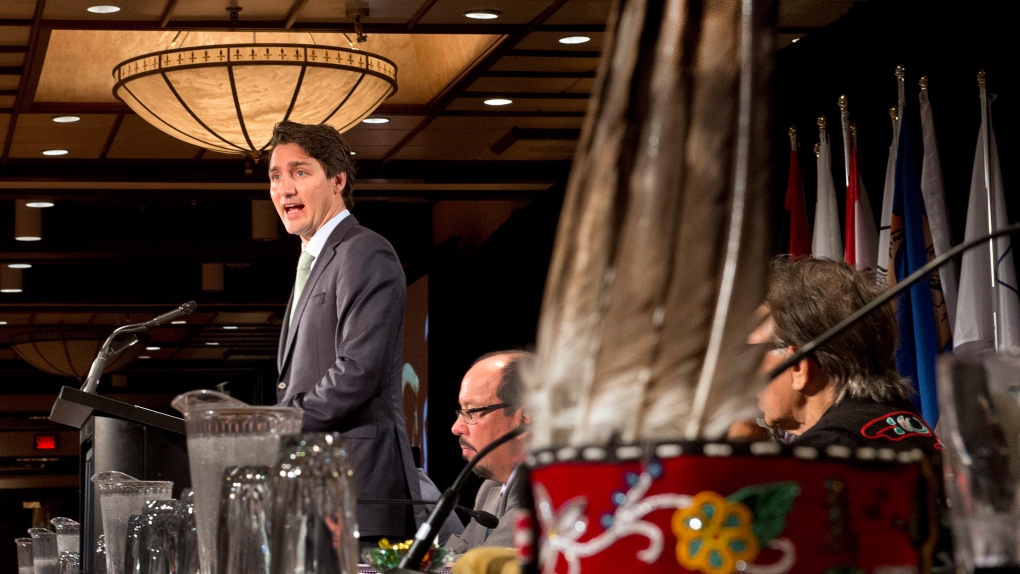 In this file photo, a First Nations headdress sits on a table as Federal Liberal Leader Justin Trudeau addresses the Assembly of First Nations congress in Montreal on Tuesday, July 7, 2015. Representatives of a northwestern Ontario Indigenous community said Wednesday they were calling for help from the federal government to cover the cost of evacuating the community due to their poor-water quality. (Ryan Remiorz / THE CANADIAN PRESS)

An abrupt downturn in an already poor water-quality situation in a northwestern Ontario Indigenous community poses more of a safety risk than the federal government is willing to acknowledge, representatives of the First Nation said Wednesday as they called for help covering the cost of evacuating the community.

Most of the 250 residents of the Neskantaga First Nation, a member of the Nishnawbe Aski Nation, flew out of the community on the weekend after untreated water began flowing from local taps and water pressure tapered off dramatically.

NAN Grand Chief Alvin Fiddler attributed the problem to a malfunctioning water treatment pump. He said the community has been under a boil-water advisory for nearly 25 years, but said the pump failure caused an immediate spike in visits to the local nursing station from residents complaining of skin irritation and other ailments.

The decline in water pressure, he added, also compromised the community's capacity to respond to emergencies such as fires.

Fiddler said Neskantaga chief Chris Moonias asked the federal government to assist with a community evacuation, but was declined.

"There was no way for him to determine the extent of the risk to the community," Fiddler said in a telephone interview. "So rather than put the lives of the members of the community at risk ... he made the call to evacuate."

Moonias did not respond to a request for comment.

Indigenous Services Canada, the federal department responsible for working with First Nations communities, said it did not see a need for the full evacuation that saw residents flown to Thunder Bay.

"The department's advice to Chief and Council was to minimize disruption to community members, knowing that the issue could be repaired in a short timeframe," Olscamp said in a statement, noting the pump was repaired by Tuesday and an environmental official was on-site testing the repaired system.

He said that Matawa Tribal Council has begun water sampling and if the chief thinks the results are acceptable, residents could start returning 24 hours later.

He added that officials will review the costs after they're submitted.

Neskantaga has grappled with poor water quality for longer than any other Canadian Indigenous community, according to Fiddler.

He said the First Nation was relocated to its current site on the shores of Lake Attawapiskat in the 1990s, at which time a water treatment plant was built. But problems soon arose and a boil-water advisory went into effect in 1995, he said, adding it's remained in place ever since.

While campaigning in Atlantic Canada on Wednesday, Liberal Party Leader Justin Trudeau said the government was "very concerned" about the situation in Neskantaga but did not specifically address the evacuation.

As part of its ongoing effort to lift boil-water advisories across the country, the federal government has pledged $8.8 million to build a modernized water treatment facility in Neskantaga.

Olscamp said construction is nearing completion and the new plant should be operating by October.

He said provincial officials also have a role to play in ensuring the safety of its Indigenous residents.

"Part of the bigger solution to all of this is to figure all that out," he said. "What is the role of the province? Who is going to provide oversight on these water treatment plants so that we don't continue to experience what we're seeing in Neskantaga?"

The office of Ontario Northern Development Minister Greg Rickford issued a statement saying the province will "work with federal partners to ensure evacuee needs are met."