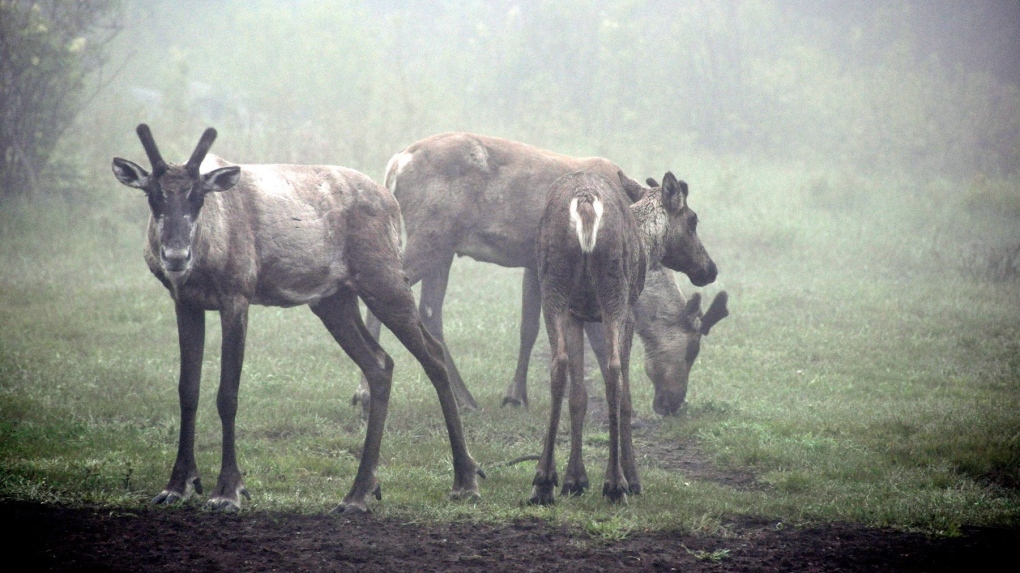 Caribou peer through the mist on an early morning on Michipicoten Island on Lake Superior in Ontario in this undated handout photo. Ministry of Natural Resources and Forestry, Andrew Silver

Endangered caribou on an island in Lake Superior will be rounded up, blindfolded and placed inside a helicopter to travel to a new home early next year as the Ontario government tries to save them from a pack of wolves.

The complex relocation of the caribou from Michipicoten Island was announced by Ontario's minister of natural resources and forestry on Thursday, with the government noting that the animals are destined to join a small herd on another island where they'll roam free from predators.

Troubles for the caribou began in the winter of 2013 when an ice bridge formed that allowed a small number of wolves to travel the 16 kilometres from the mainland to the island in northwestern Ontario, said ministry spokeswoman Jolanta Kowalski.

The ice bridge formed the following winter as well, and was considered a rare occurrence, Kowalski said.

Since then the wolves have systematically slaughtered the caribou to the point that the ministry is worried about the population's complete decimation.

"We're worried," Kowalski said. "The caribou numbers are down considerably."

A survey of the herd in 2011 showed 680 caribou on the island. Last year, there were only 120 caribou and about a dozen wolves.

Some of the caribou will be taken from Michipicoten Island to the Slate Islands, further north in Lake Superior, next year.

"We will be transporting a suitable portion of the caribou population to the Slate Islands to ensure the continued viability of this important species on an island free from predators," Natural Resources and Forestry Minister Kathryn McGarry said in a statement.

The ministry is working out the details, but said there are only about two to four bull caribou on Slate Islands. Kowalski said they're still figuring out how many caribou to bring over, but noted that they won't be moving the entire herd.

"We'll move enough that we can hopefully ensure the viability of the species on the Slate Islands," she said.

In a way the Michipicoten caribou will be returning home. In 1982, the ministry moved eight caribou from Slate Islands to Michipicoten Island and their population growth had long been considered a huge success, Kowalski said.

Historic records indicate there were caribou on the island in the early 1800s, Kowalski said, but they disappeared by the mid-1800s due to hunting.

The caribou getting a new home may be sedated for the move and are expected to have blindfolds and ear plugs to make them as comfortable as possible before they're placed on a large transport helicopter for the journey, Kowalski said.

The ministry is working with the Michipicoten First Nation to save the endangered animals, she added.

"Our hope is that the move goes well and the population survives," Kowalski said. "This is their best chance."