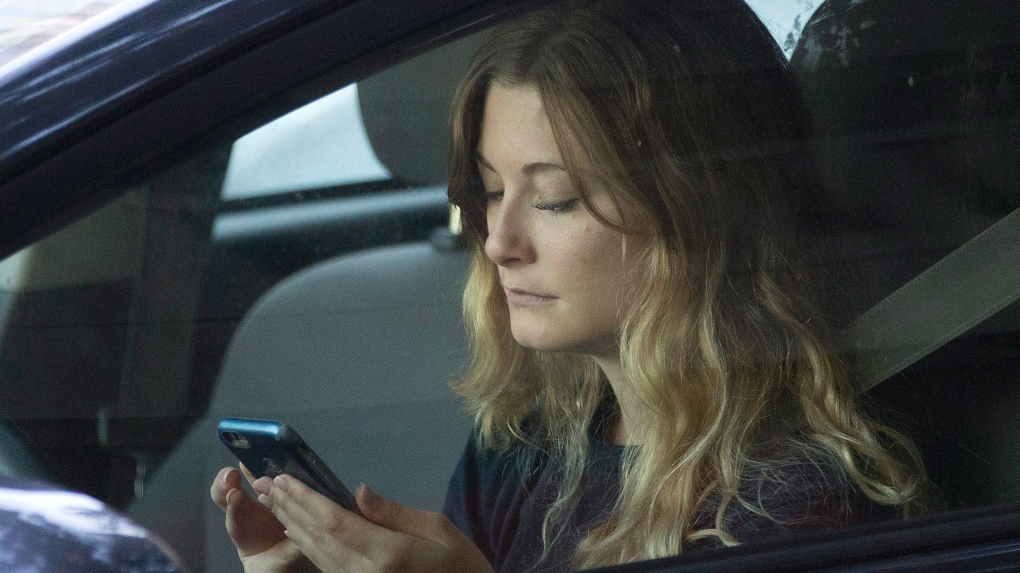 FILE - In this Wednesday, June 22, 2016, file photo, a driver uses her mobile phone while sitting in traffic in Sacramento, Calif. (AP Photo/Rich Pedroncelli)

TORONTO -- Careless drivers in Ontario causing death could soon be fined up to $50,000 as the government plans to introduce tougher penalties that will also crack down on distracted driving.

Ontario's driving legislation currently has no offence for careless driving causing death, with careless driving carrying maximum penalties of six months of jail time, $2,000 in fines, plus demerit points and a licence suspension. But safety and cycling advocates have called for much stronger penalties.

Transportation Minister Steven Del Duca announced Wednesday that the Liberal government will introduce legislation this fall that would help crack down on careless and distracted driving.

The proposed legislation would create a new offence for careless driving causing death or bodily harm, Del Duca said. It would lead to a licence suspension of up to five years, fines of between $2,000 and $50,000, up to two years of jail time and six demerit points.

Last year, 483 people were killed on Ontario roads -- 96 of them pedestrians. The changes are about protecting people on Ontario's roads, particularly vulnerable pedestrians and cyclists, Del Duca said.

"Every 17 hours on average we have a fatality on our roads," he said. "That's someone's sister or dad or daughter, gone forever."

Kasia Briegmann-Samson, of Friends and Families for Safe Streets, said it's a big step in the right direction to create a separate offence for careless driving causing death.

"If you're driving and you hit a garbage can or a post or if you hit a person and kill them, the penalty is not (currently) any different," she said.

Briegmann-Samson's husband was killed five years ago while riding his bicycle to work. That driver left the scene and so was charged with a criminal offence, not one under the Highway Traffic Act, but the driver was still sentenced to just six months and served 13 weekends, she said.

"It's gut wrenching," Briegmann-Samson said. "Personally, at the end, after it was all said and done I almost want to say to law enforcement, 'Why do you even bother?"'

The fines for distracted driving would also increase under the legislation from a maximum of $1,000 to up to $2,000 on a second conviction and up to $3,000 for third or subsequent incidents, as well as six demerit points for multiple offences. Offenders would also see their licence suspended for three days on a first offence, seven days after two convictions, and 30 days for third and further convictions.

"These proposed changes will make Ontario the first jurisdiction in Canada to have a licence suspension for those convicted of distracted driving and give us the toughest penalties for repeated distracted driving convictions in the country," Del Duca said.

Novice drivers -- those with a G1, G2, M1 or M2 licence -- would be subject to the same fines, but have harsher licence suspensions of 30 days after the first offence, 90 days after the second, and their licence would be cancelled if they are convicted of three or more distracted driving offences.

Fines for drivers who don't yield to pedestrians would be doubled, from a current maximum of $500 up to $1,000.

Briegmann-Samson said she is optimistic about the changes, but notes maximum penalties rarely get handed out.

"It will really boil down to how these changes are enacted, how police use these tools to charge drivers and how judges use them to sentence them," she said.

Legislation would bring in zero tolerance for youths aged 21 and under, novice drivers and all commercial drivers in Ontario who have a detectable presence of drugs or alcohol in their system.

It would increase all monetary penalties and suspensions for impaired driving offences and boost penalties for drivers who fail or refuse to provide a sample for a roadside test.