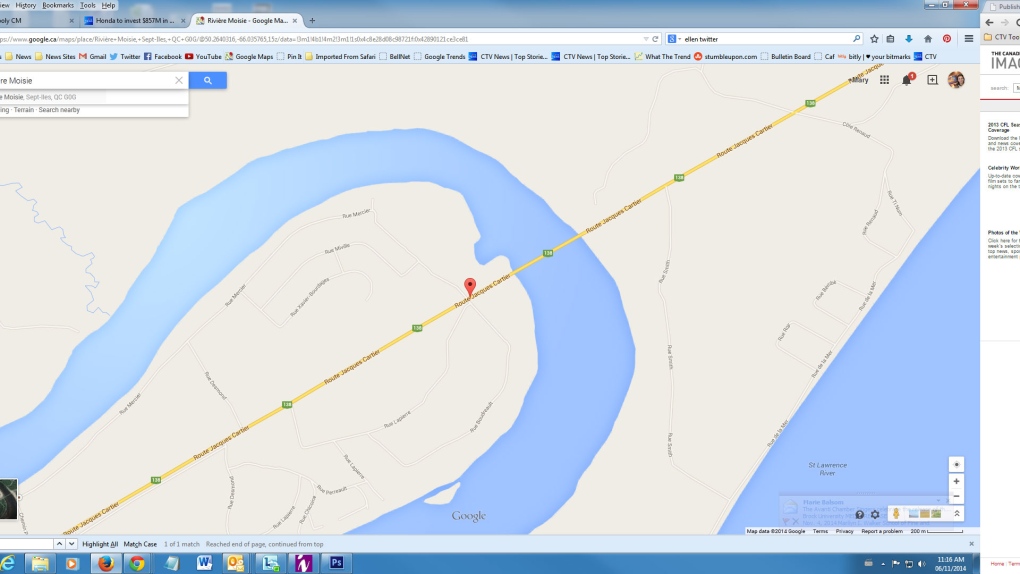 The derailment occurred at about 7:30 a.m. ET near the Moisie River, about 900 kilometres from Montreal, which is seen in this image from Google Maps.

SEPT-ILES, Que. -- Part of a freight train carrying diesel fuel plunged into a Quebec river on Thursday, leaving its engineer missing and a silvery layer of oil floating on the water.

The train, owned by Iron Ore Company of Canada, was made up of three locomotives and 240 empty cars.

The lead locomotive had a capacity of 15,000 litres and ended up fully submerged in the Moisie River on the remote North Shore, said IOC spokeswoman Claudine Gagnon.

It was unclear how many litres it contained at the time of the accident near Sept-Iles, about 900 kilometres from Montreal.

The locomotive behind it was partially submerged.

IOC, whose major shareholder is Rio Tinto, said the engineer's family had been informed of the accident.

Police divers were to arrive on the scene later Thursday, although their work may have to wait until Friday morning.

A spokesman for the Quebec Environment Department did not know how much diesel was in the river, although he said oil extended for about 20 kilometres out from shore.

Frederic Fournier could not assess the exact environmental damage

but did acknowledge there would be an "isolated impact."