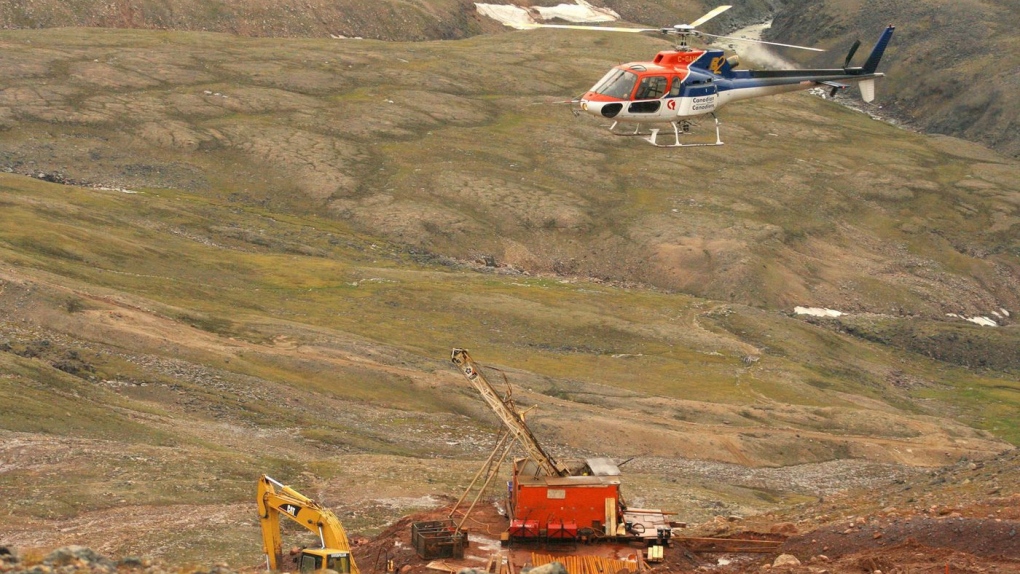 A helicopter passes over excavation equipment at the Mary River exploration camp, the site of a proposed iron mine on northern Baffin Island, in this Aug. 17, 2006, file photo. THE CANADIAN PRESS/Vinne Karetak
CAMBRIDGE BAY, Nunavut -

The Nunavut Impact Review Board is recommending the proposed expansion of an iron ore mine on the northern tip of Baffin Island should not go ahead.

Baffinland Iron Mines Corp. is seeking to expand its Mary River iron ore mine near Pond Inlet by doubling its annual output from six to 12 million tonnes.

The mine, considered one of the world's richest iron deposits, opened in 2015 and ships about six million tonnes of ore a year.

The mine says the expansion would more than double employment at the mine to more than 1,000.

The review board said Friday in a release that there is potential for the proposal to have significant and lasting negative effects on marine mammals, the marine environment, fish, caribou and other wildlife, vegetation and freshwater.

The board said these negative effects could also impact Inuit harvesting, culture, land use and food security.

"As a result, the board has recommended to the Minister that the Phase 2 Development Proposal as assessed should not be permitted to proceed at this time."

Federal Northern Affairs Minister Dan Vandal thanked the board for its work and said the government will review the report and its recommendation.

"I will be taking time to review the report along with federal officials," Vandal said on Twitter. "A decision will be taken following appropriate due diligence and comprehensive analysis, including whether the duty to consult has been met or not."

The mine proposal has faced opposition, including from hunters and trappers in the community closest to the mine.

Inuit hunters said they feared an expansion of the mine could hasten the ongoing decline of a narwhal population that they rely on for food.

In a letter sent last week to the board, the Mittimatalik Hunters and Trappers Organization said the mine is already harming their ability to harvest the important food source.

This report by The Canadian Press was first published May 13, 2022.

Meghan, the Duchess of Sussex, made a visit to a memorial site for the victims involved in the deadly elementary school shooting in Texas.