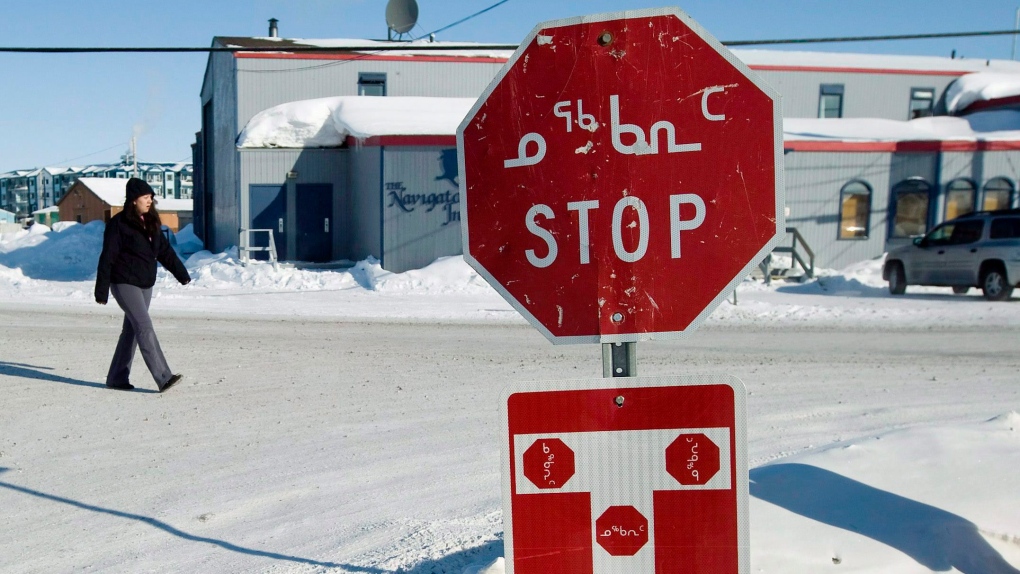 A person walks past a stop sign displayed in both English and Inuktitut in the city of Iqaluit, Nunavut on March 28, 2009. (THE CANADIAN PRESS / Nathan Denette)

MONTREAL -- It has long been considered one of Canada's healthier aboriginal languages, but a recent report suggests Inuktitut's future may not be so bright in Quebec.

A community organization in Nunavik, a territory comprising the northern third of the province, is hoping a greater emphasis on traditional storytelling, theatre and cultural workshops will help revive the Inuit language.

"The younger generations have lost touch with their true identity, so we're trying to figure out ways for much more interaction and contact between the older generation and the youth," said Zebedee Nungak, the director of the Inuktitut language department at Nunavik's Avataq Cultural Institute, the group that put together the report.

The report flows from a three-and-a-half-year project conducted by a small team of researchers who visited every community in Nunavik, an area larger than Germany with only 12,000 people.

It noted a decline in the quality of Inuktitut in Nunavik -- including poor grammar, a low level of vocabulary and increased mixing of Inuktitut with English.

It suggests the prevalence of 300-plus satellite TV channels in both English and French, along with a lack of cultural activities in Inuktitut, is behind the decline.

"Inuktitut's quality and usage are undergoing a wide variety of stresses, which threaten its health and existence," stated the report, a 250-page document written in English, French and Inuktitut.

Researchers interviewed adults and students, held workshops, and collected data about how and when Inuktitut is used at home and at work.

Generally, Inuktitut is thought to be one of the aboriginal languages with a chance of survival.

Out of the 60 aboriginal languages reported in the 2011 census, it was one of only three considered strong enough to be thought secure from the threat of extinction, along with Cree and Ojibwa.

There are about 34,000 Inuktitut speakers, with most living in Nunavut and northern Quebec. Roughly two-thirds of all Inuit speak it and about half speak it at home.

Inuit youth under the age of 25 make up the most sizable segment of the Nunavik population, according to the report.

The report offers a series of recommendations and most of them focus on youth and cultural activities. It suggests increasing the use of Inuktitut in creative arts, such as storytelling and theatre. It also wants to establish more Inuit cultural centres and improved access to Inuktitut language training.

Nungak also spoke of plans to organize Inuktitut "terminology workshops" to help modernize the language, so that Inuktitut speakers can refer more accurately to current-day technology, like computer tablets and laptops.

Not everyone is on board with the push to promote Inuktitut.

There are some who believe that too much focus on the language would leave students at a disadvantage when it comes to learning English and French -- and ultimately, getting a job, said Donald Taylor, a McGill University professor with a focus on aboriginal languages.

But Taylor found the opposite in his own research.

He said that devoting more time to learning Inuktitut would, over time, enhance language abilities in a second language as well.

"I am 100 per cent down as the more you teach through Inuktitut, the better," he said.

"That does not imply one iota of a loss for English or English."

A 2011 national strategy on Inuit education concluded that the key to improving a 25 per cent graduation rate for Inuit children is teaching them in their aboriginal language, as well as in English or French.

There is already a movement underway for Inuit children to receive bilingual education in Inuktitut, particularly across the Hudson Bay, in Nunavut.

Customers in shops, restaurants and other businesses must have access to service in Inuktitut. Municipal services are to be available in the Inuit language within four years. It is to be the language of work in the public service as of Sept. 18.

Inuit language instruction is now compulsory for students in kindergarten to Grade 3. That's to be extended to other grades by 2019.

One of the challenges, though, is finding enough teachers fluent in the language.

Inuktitut wasn't allowed in residential schools, creating a whole generation of Inuit who didn't get much exposure to the language, Nungak said.

In Nunavik and elsewhere, though, Nungak feels more needs to be done. He said his group will continue to look for ways to ensure Inuktitut is around for years to come.

"If we don't do extraordinary things to ensure that they are self-aware of their own heritage and can speak their language well, we're waving goodbye to our language and history."