Not just the pandemic: Why housing prices are skyrocketing, and what could come next

The Canadian Real Estate Association (CREA) reports that in March, the average sale price of a home in Canada was 31.6 per cent higher than it was one year earlier – a record by any measure – and nearly six per cent above what it was even in February.

There has been a slight pullback from those eye-popping numbers, but the trend is still clear in communities from the Maritimes to oil country to Sudbury, Ont. – homes aren't just more valuable than ever, they're gaining in value in a way they never have before.

Nathanael Lauster, a sociology professor at the University of British Columbia who studies issues related to housing, describes it as a "perfect storm" brought on by the combination of low interest rates and the COVID-19 pandemic, allowing would-be homebuyers to save more money than usual.

"We're seeing a lot of similar issues, all across the country … really boosting real estate prices," he told CTVNews.ca via telephone this month.

"You've got both the rise in demand and a rise in the supply of money to enable people to then put that [money] toward their desires, which is to either buy their first home or buy someplace that might be a little bit bigger."

Canada's largest cities, meanwhile, are showing up increasingly often on lists of the least affordable real estate markets in the world. In a report released last month, the Oxford Economics think tank looked at 25 metropolitan areas in Canada and the U.S. They concluded that the three least affordable are Vancouver, Toronto, and Hamilton, Ont. Los Angeles and San Jose – two areas that certainly come to mind when one thinks of expensive homes in the U.S. – are next on the list, with Ottawa in sixth place, ahead of Seattle and New York City.

It's no wonder that a recent survey from RBC found that more than one-third of Canadians between the ages 18 and 40 no longer believe they will ever be able to own a home. 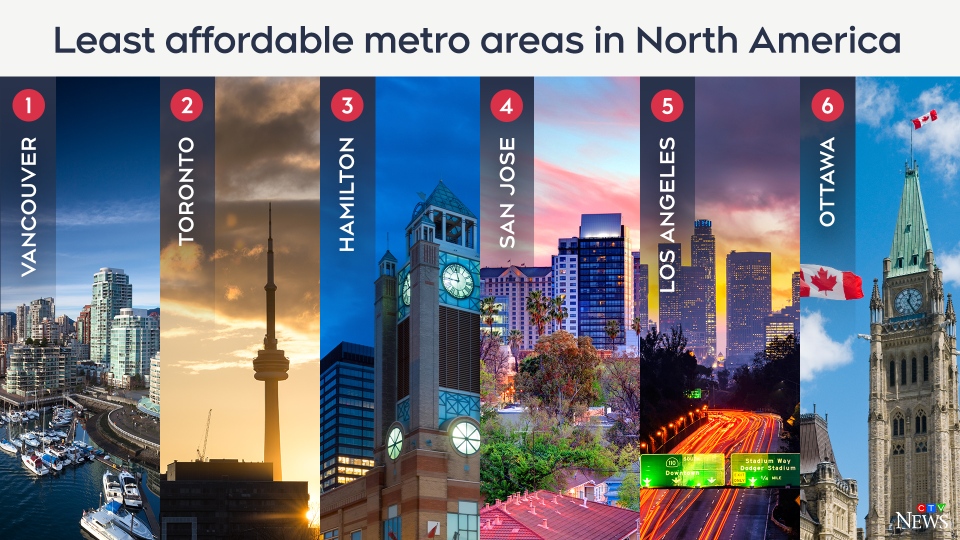 The Canada Mortgage and Housing Corporation forecasts that this pandemic-induced turbocharge of so many housing markets won't wear off for another two years. Even once that happens, they say, it's not that prices will go down, it's just that they won't rise quite so fast.

Predicting what will happen more than a few years out is more difficult; any number of government actions and market forces can have a significant effect on housing stock and value. However, several analysts who spoke with CTVNews.ca say one thing is clear: without substantial increases to Canada's housing supply, prices will only continue to rise far faster than the rate of inflation, leaving those who don't already own a home even further behind.

Many economists have raised alarm bells over the lack of housing to meet the needs of our existing population, to say nothing of the millions of newcomers expected to flock to this country over the next 20 years.

Scotiabank economist Jean-François Perrault added his voice to the chorus last month. He wrote in a report that Canada's ratio of housing units to population has fallen since 2016, as the pace of construction has not kept up with the pace of immigration, even with the latter slowing to a trickle during the pandemic.

This is a uniquely Canadian problem; Perrault said that Canada's housing-to-population ratio is the lowest of any G7 nation. To match the average ratio of the G7, he said, Canada would need an additional 1.8 million homes – not far off from the total number of new homes built in the past decade.

WHERE ARE PEOPLE MOVING?

The pandemic has upended traditional movement patterns for in-country migration. This has especially been felt in Atlantic Canada, where skyrocketing real estate prices are being blamed on newcomers moving from Ontario in search of more bang for their housing buck. In some cases, Ontarians are even moving to the East Coast without having visited the community in which their new home sits.

Not everyone is prepared to make quite that big a move, though. Back in Ontario, communities outside the Greater Toronto Area are seeing some of the highest sale price increases in the country. Mike Moffatt, the executive director of the Ottawa-based Smart Prosperity Institute, says that's because of a mindset he describes as "drive until you qualify."

Because housing in southern Ontario is more expensive the closer a home is to Toronto, Moffatt says, some prospective homebuyers are simply picking a highway out of the big city and driving until they find a place where they're happy with what they can get for their money.

This has the knock-on effect of driving up prices in those outer cities, which spells trouble for those already there who were hoping to one day buy homes for themselves, and now find themselves priced out of the market.

"People are planning to buy a home in the community where they grew up or they went to school … and finding that they can't, and they're having to move further afield," Moffatt told CTVNews.ca via telephone this month.

"Drive until you qualify" may be more common since the pandemic hit, but it isn't a new phenomenon. Five years ago, buyers from the Toronto area lined up overnight to register for a new housing development in Waterloo, Ont., surprising local residents who were used to a much more measured sales pace.

Moffatt had his own experience with the practice in 2017, when he sold his home in London, Ont. to move to a smaller community outside that city. He received multiple offers, he says – all from young families from Toronto who were looking for a bigger home than they could afford in the bigger city.

"You're noticing the big price increases because of COVID, but this has been happening for years," he said.

WINNIPEG: WHERE HOMES ARE STILL AFFORDABLE

Not every big city in Canada has been priced out of the realm of affordability. The same Oxford Economics report that found Vancouver, Toronto and Hamilton to have the least affordable housing markets of 25 in North America also found four Canadian cities among the 10 most affordable: Quebec City, Edmonton, Winnipeg and Calgary.

In Winnipeg, real estate activity is at all-time highs and sale prices are up, but not to the extent seen in southern Ontario or British Columbia's lower mainland.

"We've seen some prices certainly rise for a lot of Winnipeggers that are feeling the city being less affordable, but in comparison, it's pretty hard not to say that Winnipeg still remains a pretty affordable community in Canada," Jino Distasio, a geography professor at the University of Winnipeg, told CTVNews.ca via telephone this month.

Once one of Canada's prime examples of urban stagnation – its population essentially stayed flat in the 1990s – Winnipeg has seen an immigration-fuelled population boom over the past decade and a half.

That's disrupted the work of city leaders. Previously occupied by issues around abandoned homes, declining housing stock and crime, they've had to turn their attention to working with developers who want to fast-track projects, pushes for active infrastructure and sustainability, and the other demands that come with running a growing city.

All of those efforts may one day push Winnipeg into the big leagues when it comes to unaffordability. For now, though, Distasio likes to remind his friends in Toronto and Vancouver that for the price of their home there, they could afford a nicer home in Winnipeg, plus a little cottage somewhere on the lake – "and probably still have money in your pocket."

TAXING OUR WAY TO A SOLUTION?

One of the more publicized attempts to increase housing supply without building new housing occurred in 2016, when B.C. implemented a so-called foreign buyers tax, which requires non-residents to pay more to purchase or hold onto residential real estate in certain parts of the province.

Analysts have said that the measure did help drive down the cost of housing, but is not on its own a solution to unaffordability. The data bears that out: this April, nearly five years after the B.C. tax was introduced, the benchmark price of a detached home was more than 20 per cent higher than it had been one year earlier.

In Lauster's view, whatever effect the foreign buyers' tax had on housing prices is secondary to the effect it had on anti-foreigner sentiment in general and anti-Chinese sentiment specifically.

"It was really attached to this narrative that it was all about people from China buying up all the properties," he said.

"It's a very easy target to demonize, because effectively they're not voting, but there are really not that many [foreign buyers] to begin with."

More palatable to Moffatt and Lauster is the idea of a universal vacancy tax, in which owners have to pay more to keep a home empty than they would if it was occupied, regardless of whether they are Canadians or foreigners. Vancouver has done this as well, Toronto has one coming into effect in 2022, and the City of Ottawa appears poised to adopt a vacancy tax of its own. Proponents of this measure say it increases the supply of housing by discouraging property owners from letting their homes sit vacant.

The federal government announced as part of its latest budget that it will implement a similar levy as it attempts to lower the cost of housing, although it will only apply to foreign nationals, not to Canadians who own vacant homes.

The government expects new restrictions around mortgage stress tests to further soften the housing market, and Prime Minister Justin Trudeau has said there is more government intervention to come.

Lauster and Moffatt both said that while the measures announced to date may have some short-term impact on house prices, keeping the market from spiralling out of control again in the future will require a different way of thinking – and likely upsetting some apple carts in the process.

"In the long run, we're going to have to build more housing," Moffatt said.

"That's going to mean some difficult decisions around zoning, around urban growth boundaries, around social housing."