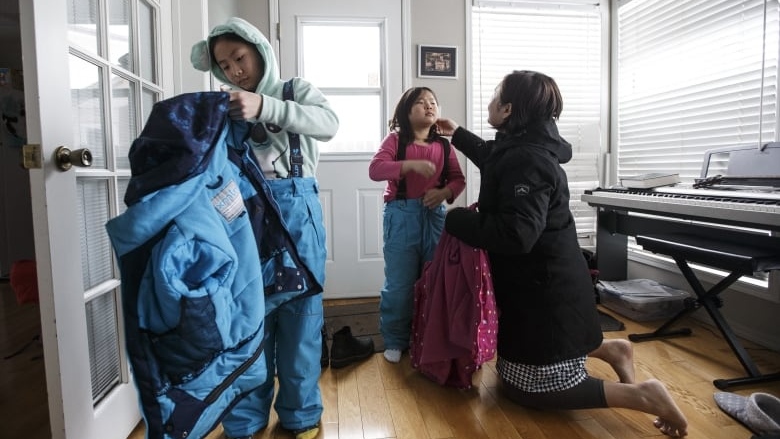 EDMONTON -- A woman in Alberta says she feels like she's not Canadian enough after her daughters were denied citizenship.

Victoria Maruyama was born in Hong Kong and, because her father was Canadian, has been a Canadian citizen since she was a baby. When she was a year old, the family moved to Edmonton where she grew up.

At the age of 22, she went to Japan to teach English.

"I met my kids' dad," Maruyama said in an interview with The Canadian Press. "The plan was just to teach English throughout Asia, move around from one country to the next, but he kind of scotched my plans."

She was seven months pregnant with their first daughter, Akari, in 2009 when Conservative government amendments to the citizenship laws took away her right to pass on citizenship to her children unless they were born in Canada.

By that time, it was too late in her pregnancy to fly back to Canada. Her second daughter, Arisa, was also born in Japan.

The girls are now seven and nine years old and, despite moving back to Edmonton almost two years ago, Maruyama is still fighting for them to become Canadian.

"We had to struggle to get my kids in school. We had to fight to get them health care. They had no health care for months. Then they had it for six months and then they were stripped of it again," she said.

"It should be my right to come home with my children and for them to be educated and ... have health care and vaccinations and all those basic things."

A January letter from Immigration, Refugees and Citizenship Canada notes Akari and Arisa were rejected because "they are not stateless, will not face special and unusual hardship if you are not granted Canadian citizenship and you have not provided services of exceptional value to Canada."

Officials with the federal department said in a statement that decision-makers determined that criteria for citizenship have not been met.

"As part of the determination, the best interests of the child were considered," they said in an email. "However, sufficient evidence was not provided to demonstrate that the children have been denied access to basic services in Canada."

Maruyama's lawyer, Charles Gibson, has filed an application for a judicial review in Federal Court. He argues that the rejection is unlawful and that the Citizenship Act is discriminatory.

"As a result, the applicant has suffered a great deal of hardship."

Don Chapman, an advocate for "lost" Canadians, said the law also goes against the UN Convention on the Rights of the Child, which Canada signed in 1990.

Chapman said there are many expat Canadians who could find themselves in the same situation.

"It's a problem that's going to explode."

When Justin Trudeau was citizenship and immigration critic, he promised in a March 2011 news release to change the "anachronistic" law.

He said the Maruyama family is caught in the middle of the 2009 legal changes.

Maruyama said if they aren't able to get citizenship, her girls could apply for permanent residence status as immigrants -- a possibility confirmed by the federal Immigration Department.

"They would have a higher level of citizenship than me because they (could) ... pass on citizenship to their children," she said. "But me living here 20-some years is not enough.