Newfoundlanders, hunkered down in blistering winter storm, stockpile their #stormchips 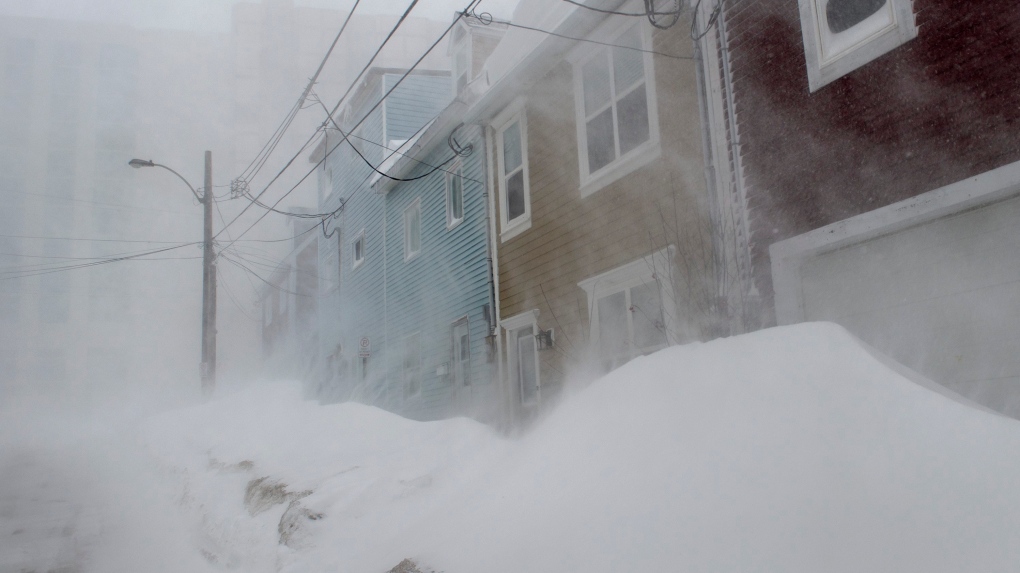 High winds and heavy snow cause white out conditions in St. John’s on Friday, January 17, 2020. The City of St. John's has declared a state of emergency, ordering businesses closed and vehicles off the roads as blizzard conditions descend on the Newfoundland and Labrador capital. THE CANADIAN PRESS/Andrew Vaughan

TORONTO -- When you’re about to be buried in two-and-a-half feet of snow, what’s the one food item you want to stock up on?

If you live in Newfoundland, there may only be one right answer: chips.

As much of Atlantic Canada hunkers down for the massive winter blizzard blasting through eastern Canada, social media users are not only sharing impressive photos of the storm, but also their personal chip stockpile and chip aisles cleaned out at the grocery store.

"More like storm chipageddon! The chip aisle at wal mart, Stavanger. Crowds weren't bad at all, actually, and most other shelves are fully stocked. #nlwx #stormchips,” Stuart MacGillivray, a user from St John’s, Newfoundland tweeted.

More like storm chipageddon! The chip aisle at wal mart, Stavanger. Crowds weren't bad at all, actually, and most other shelves are fully stocked. #nlwx #stormchips pic.twitter.com/wv38KbWr1b

“Newfoundlander’s toxic trait is loading up HARD on sodium the night before shoveling the driveway. #nlwx #stormchips #yyt,” Mitch Colbourne, another Newfoundlander, tweeted.

Since around 2014, the hashtag #stormchips has made an appearance on social media whenever a winter storm hits the East Coast. The origins are traced back to author Stephanie Domet, who used to host a CBC Radio One program in Halifax.

In an interview she gave Macleans in 2015, she explained how she kept craving chips during an extended stretch of winter storms. Following a conversation on her show, where she and a colleague discussed stocking up ahead of another one, she bought her favourite chips and tweeted, “Success! #stormchips.”

The hashtag took off, and has since become a part of the region’s storm lexicon.

Domet, who has “Half-proud originator of #stormchips” on her Twitter bio, told the magazine it was by far the most popular thing she’d ever written with the least amount of effort.

The importance of a proper supply of storm chips cannot be overstated, if Twitter is any indication.

“Islanders, be they from the rock or PEI, are usually well prepared. Good to see you had your storm survival kit on the ready #Stormchips @PEIPotatoes” one user tweeted in reply to another user’s photo of chips and beer.

One individual expressed horror at the realization that he left his storm chips in the car, while another worried, “I may be kicked out of the house for gross mismanagement of the #stormchips supply.”

NLC Liquor Store, run by the province of Newfoundland and Labrador even offers a wine and beer Storm Chip Pairing Guide, suggesting a Sauvignon Blanc for tart chips like dill or salt and vinegar, a Sleeman or Prosecco for the classic plain flavour, or a Coors Light for spicy chip lovers.

Just in time for the next big dig out….
Check out our Storm Chip Pairing Guide – great beer and wine pairings for your favourite storm chips! Find these and more at https://t.co/SGlKand72C pic.twitter.com/wOuJrLM4J8

But there might be one thing that could give chips some competition when residents are expected to be snowed in: toilet paper. A resident in St John’s tweeted a photo of an empty store aisle of a different kind, writing, “Toilet paper is ALSO pretty popular when bad weather is inbound...and I’d rather run out of chips than this. #stormchips #nl.”

Toilet paper is ALSO pretty popular when bad weather is inbound... and I'd rather run out of chips than this.#stormchips #nl pic.twitter.com/JAulVh1SGC