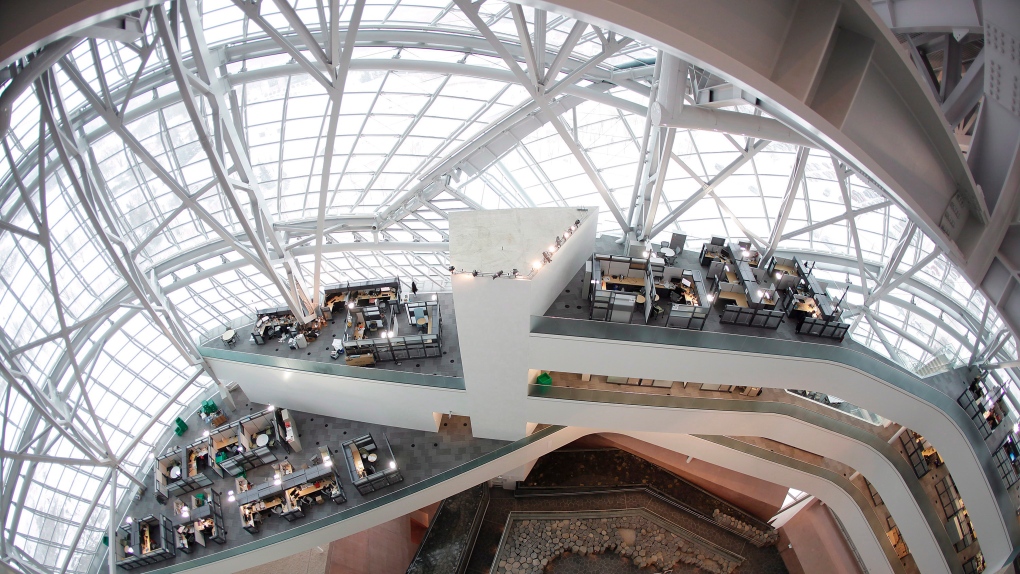 Staff offices are seen from the Tower of Hope and overlooking the Garden Of Contemplation in the Canadian Museum for Human Rights in Winnipeg photographed Friday, January 10, 2014 during the final media tour prior to it's official opening. (John Woods / THE CANADIAN PRESS)

WINNIPEG -- When Canada's newest national museum opens next weekend, it will mark the end of a 14-year journey sparked by one family's desire to have Canadians learn about the struggle for -- and the fragility of -- freedom.

The road to create the Canadian Museum For Human Rights has not always been a smooth one. Costs rose sharply, which led to a renewed search for donors and government aid. And deciding which groups and what milestones to recognize has been a thorny issue with some interest groups.

The idea for the museum came to media magnate Israel (Izzy) Asper and his daughter Gail in the summer of 2000 as they pondered why there were no Canadian equivalents to museums in the United States that highlight atrocities such as the Holocaust and triumphs such as the Declaration of Independence.

"Shouldn't (children) be learning Canadian history and our Canadian heroes in human rights?" Gail Asper recalls telling her father at the time. The Asper Foundation, the family's charitable trust, had been sending students to Washington, D.C., for several years to see museums there.

A few days later, Izzy Asper talked with Moe Levy, the executive director of the Asper Foundation, about creating a museum of tolerance similar to one that had been recently built in Los Angeles.

But unlike other national museums, this one would not be built in the Ottawa region.

"Moe went home to go to bed, and he got a call in the middle of the night from my dad, and Dad said, 'Moe, I found the land,"' Gail Asper recounts.

The museum is to hold its opening ceremonies next weekend on that very parcel at The Forks -- the junction of the Red and Assiniboine rivers that was a gathering spot for aboriginals long before it became the birthplace of Winnipeg.

It took more than a decade to secure the land, gather all the money and build what is now an iconic part of the Winnipeg skyline -- a 24,000-square-metre stone building topped by a striking glass tower that stands higher than the Peace Tower on Parliament Hill.

The museum is filled with interactive exhibits, and there are seven theatres for live performance and film.

The building houses 160 works of art and historical objects: The Canadian Bill of Rights signed by John Diefenbaker in 1960; handwritten notes from 1981 by Roy Romanow, when he was attorney general of Saskatchewan, that led to a deal to patriate the Constitution; a ballot box from the 1994 election in South Africa that saw Nelson Mandela elected as that nation's first black leader.

'Our role is to bring multiple perspectives'

The museum portrays both triumphs and failures throughout Canada's history: French-language rights, the Chinese head tax and government policies toward aboriginal people.

It will also challenge many people's views on historical figures such as Louis Riel, says CEO Stuart Murray.

"Louis Riel was hanged by jury in Regina (for treason). But the other side of Louis Riel was that he was also the founding father of the province of Manitoba as we know it today," Murray says.

"And the most important part for me is that he was democratically elected three times to the House of Commons and couldn't serve one day.

"Our role is to bring those multiple perspectives."

There were times when it appeared the museum might never materialize.

The family wondered whether to press on when Izzy Asper died in October 2003.

Prime Minister Jean Chretien retired shortly afterward, which required renewed talks with his replacement, Paul Martin, about the Aspers' goal of securing $100 million in federal funds for one-time construction costs and a smaller amount each year for operating expenses.

"We had a new government that was coming in that was really under the glare of the media and ... had no real appetite for taking risks at this point," Asper says.

But the family pushed ahead in Izzy's name.

"As far as he was concerned, if you try your best -- give it your all --and you fail, that can happen. He failed many times in his life. He understood that. But for him, the real deal-breaker was to not even try."

With the passage of time, the original price tag of $200 million ballooned.

As head of the fundraising group, Gail Asper approached corporations, individuals and even other provincial governments for donations.

At the end of 2008, Prime Minister Stephen Harper announced the federal government would essentially take over the museum, pay $100 million in capital costs and provide $21.7 million annually to cover operating expenses.

Construction began the following year, and the museum's price tag eventually reached $351 million. Museum officials are quick to point out that, unlike other national museums, theirs has had $147 million in private donations and tens of millions in municipal and provincial funds.

The museum has had another big challenge -- finding a delicate balance in its descriptions of controversial issues. There have also been controversies over how much floor space is devoted to specific events.

The Ukrainian Canadian Congress has said the museum is wrong to have a permanent gallery dedicated to the Holocaust, while offering less prominence to atrocities such as the Holodomor -- the forced starvation of Ukrainians by the U.S.S.R. in the 1930s.

More recently, some aboriginal groups have criticized the museum for not using the term "genocide" to describe Canadian policies toward First Nations.

Despite the long and sometimes bumpy road, Asper says the effort has been worth it.

And her work is not over. Her next goal is to raise money to subsidize visits by students from other parts of the country.

"He said, 'If one kid goes through and their view on human rights and the world is transformed because of what they learn here, our jobs will have been done."'