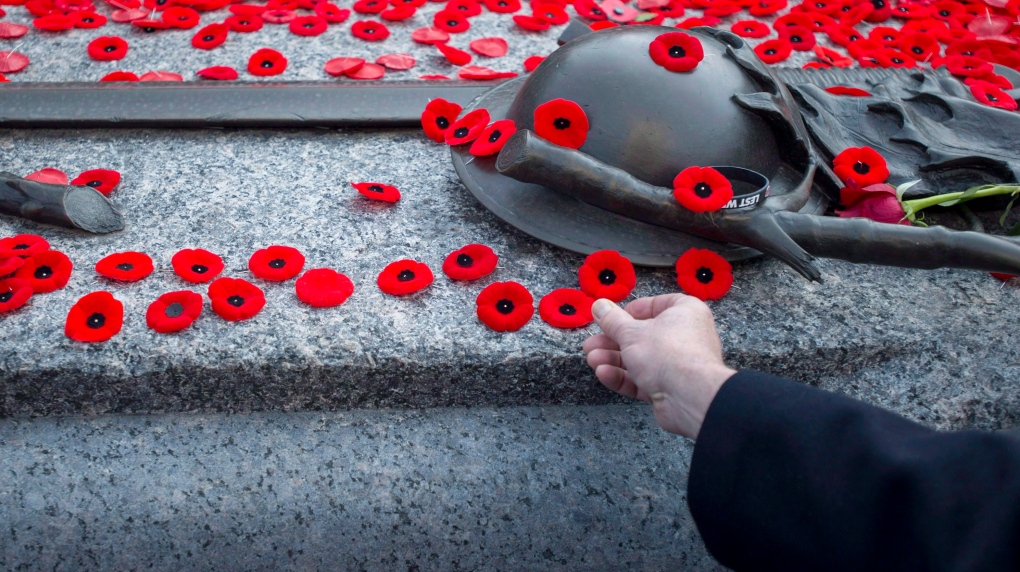 People place poppies at the Tomb of the Unknown Soldier following the Remembrance Day ceremony at the National War Memorial in Ottawa on Nov. 11, 2014. (Justin Tang/THE CANADIAN PRESS)

OTTAWA -- As Canadians prepare to mark Remembrance Day, a new survey by Statistics Canada suggests a growing number of veterans are having a hard time adjusting to post-military life.

The survey -- conducted last year but the results of which were only recently released -- found about one in three veterans had a difficult or very difficult transition from military to civilian life.

While that in itself is cause for concern, the bigger worry was that 42 per cent of veterans who retired between 2012 and 2015 reported problems, significantly more than the 29 per cent of those who retired before 2012.

More than 2,700 former regular forces members responded to the survey, which is conducted every three years.

The findings appear to back up widespread complaints from new veterans -- particularly those who served in Afghanistan -- about the onerous process and lack of support for those re-entering the civilian world.

"What it means to me is that it's not getting any better despite how much attention has been paid to this, especially in the last five years," said Scott Maxwell, executive director of Wounded Warriors Canada.

"If it's not improving, we have to look at why that is and we have to ensure there's always as much support as we can put in place for these members when they are leaving the Canadian Forces."

The survey did not provide details as to why new veterans were more likely to experience hardship, though service in Afghanistan and less than 10 years in uniform were factors associated with a difficult adjustment.

But many veterans have complained about delayed pensions, insufficient disability benefits, difficulties finding work, and even trouble accessing provincial health services after years of using the military's medical system.

Those challenges are even more difficult for veterans who have suffered physical or mental injuries while in uniform.

Defence chief Gen. Jonathan Vance acknowledged last month, as the government unveiled its new suicide prevention strategy for military personnel and veterans, that more had to be done.

"We have a large number of veterans from recent conflicts that ΓÇª we were failing them in their transition, they were weakened as a result of military service, and we weren't doing the right thing," he said.

The Trudeau government has promised to cut red tape, increase benefits and hire more staff, while National Defence and Veterans Affairs Canada say they are working to ease the transition for service members.

That includes letting military personnel stay in uniform until their pensions and disability benefits are in place, and increasing contact with new veterans to monitor their progress.

"Our government has made tremendous progress in the last couple of years with respect to reducing bureaucratic burden and empowering staff to make decisions," Wellstead said in an email.

"There is still work to do, including providing details on a pension for life option, but we are confident that we are on the right path."

Some veterans' advocates such as Maxwell, whose group helps veterans with mental trauma, have expressed cautious optimism about the recent commitments to fix the transition system for retiring military personnel.

But they also say such promises have been made before and it'd too early to tell whether this time is different.

"They've said they won't release anybody until they have their pensions and disability benefits," said Jim Lowther, president of Veterans Emergency Transition Services, which helps homeless vets.

"But they're still releasing people who are not ready. We've had people come to us still who have been released, and they weren't ready to be released."

Canadians mark Remembrance Day across the nation and abroad

Canadians mark 100 years since Battle of Passchendaele in Belgium

When was Battle of Passchendaele? Most Canadians don't know: poll