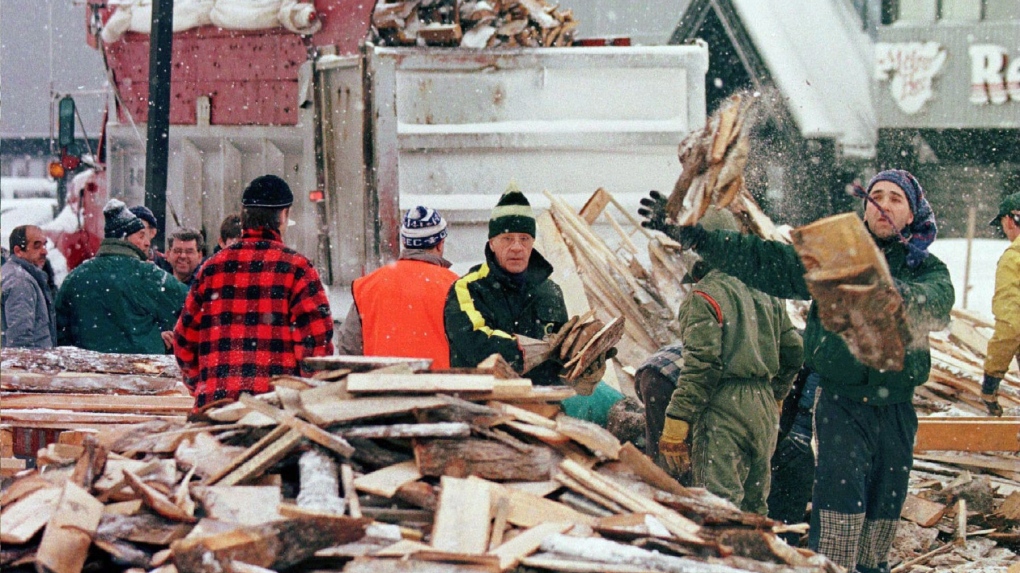 FILE -- Volunteers in Quebec City pile firewood to be sent to the Montreal region after an ice storm, on Jan. 13, 1998. (THE CANADIAN PRESS/ Jacques Boissinot)

Montreal's strict, new rules regarding wood-burning appliances are set to kick in this year, two decades after the heating systems regained popularity in the aftermath of the crippling 1998 ice storm.

By October, it will be illegal for Montrealers to use what's considered a solid-fuel-burning heating system unless the appliance has been certified as emitting no more than 2.5 grams per hour of fine particles into the atmosphere.

The slow crackdown on these appliances, such as wood-burning stoves and fireplaces, began roughly a decade ago after health authorities started warning about the growing number of wintertime smog days in Montreal.

On Friday, Environment Canada issued a smog warning for Montreal and surrounding areas. The agency said "high concentrations of fine particulates" were expected to persist through the morning and result in poor air quality.

Montreal residents in particular were advised to stop using wood-burning stoves or fireplaces until the warning is lifted.

Anti-pollution activist Andre Belisle says Montreal's frequent poor wintertime air quality is partly due to the legacy of the ice storm when, over a several-day period in January 1998, cities along the St. Lawrence Valley received more than double the normal amount of freezing rain for the year.

Electricity blackouts lasted weeks in certain areas and people rushed to buy wood-burning stoves and other similar heating systems to survive the cold and to be prepared for a similar weather crisis.

"There was literally an explosion of people going back to wood-burning heating systems (in 1998)," said Belisle, president of a Quebec association that fights atmospheric pollution.

"We ran a recycling program to try and eliminate slow-burning stoves and we did an analysis and learned that following the ice storm, stores all over the city went out of stock, and people from Montreal started buying wood-burning appliances from all other regions of the province."

Montreal's new emission standards are the most strict in the province, according to Chantal Demers, head of a Quebec association representing companies in the heating industry.

"We would have preferred for the rules to be less severe," she said in an interview. "They go above and beyond what is required provincially."

In 2009, Quebec passed provincewide legislation banning the fabrication, selling and distribution of wood-burning appliances that weren't certified by the Canadian Standards Association or the American Environmental Protection Agency.

Montreal started taking action against the roughly 50,000 wood-burning appliances on its territory, also in 2009, when it banned the installation of any new, non-EPA-certified wood-burning heating system.

The latest bylaw was passed by Montreal city council in 2015, but the appliance ban takes effect this year.

Under the rules, Montrealers can't use any wood-burning appliance, regardless of certification, during smog alert days.

Citizens won't be forced to get rid of their less-performing, wood-burning appliances such as fireplaces but they won't be able to use them after October.

The law, however, includes one exception: if a power outage lasts longer than three hours, citizens can use any wood-burning appliance they own.

Additionally, the new rules don't apply to wood-burning appliances that cook food for commercial purposes, such as the city's famed bagel shops.