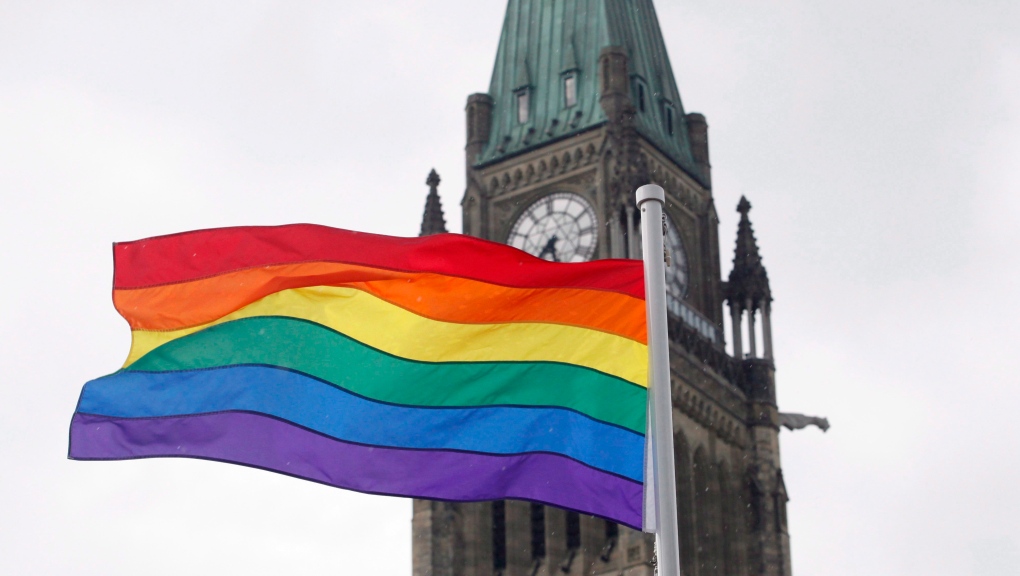 The pride flag flies in front of the Peace Tower on Parliament Hill after a flag raising ceremony in Ottawa on Wednesday, June 20, 2018. THE CANADIAN PRESS/ Patrick Doyle

TORONTO -- A new report looking at the inclusion and treatment of LGBTQI2S employees within federal departments over the last year has found a “lack of centralized strategy” for inclusion of LGBTQI2S people.

The report, released Monday on the International Day Against Homophobia, Biphobia, Intersexism and Transphobia, was put out by LGBT Purge Fund, a non-profit organization that works to track Canada’s progress since the purge that saw LGBTQ2S+ people unjustly abused, harassed out of their jobs or fired between the 1950s and the mid-1990s.

To create the report, advocacy groups Egale Canada and Fondation Emergence worked together to research, interview and assess federal departments, including the RCMP, Global Affairs Canada, the Canadian Armed Forces, Canada Revenue Agency and the Department of National Defence, among others.

“Since the LGBT Purge, we have come a long way towards building inclusive federal workplaces, but it will take coordinated, deliberate, and effective efforts to promote sustainable culture change and foster truly inclusive workplaces across the Government of Canada,” Michelle Douglas, Executive Director of the LGBT Purge Fund, said in a press release.

The report includes 23 recommendations for how federal departments as a whole can improve, as well as breakdowns of how specific participating departments are performing in terms of inclusion and equity.

One of the main “foundational” recommendations is for departments to consult with stakeholders, LGBTQ2S+ employees and external subject matter experts when developing and reviewing organizational policies and practices.

Another is that organizations should stop taking a big picture overview of equality and anti-discrimination and instead address specific concerns that affect different groups within the LGBTQ2S+ community.

Bardish Chagger, Minister of Diversity and Inclusion and Youth, said in a statement on Monday that the government “is committed to improving equity for LGBTQ2 communities through the promotion of human rights and the development of inclusive federal policies, programs, and laws.

“Today, on behalf of the Purge survivors, the LGBT Purge Fund released a series of recommendations on how to respect, build, and strengthen LGBTQ2 diversity and inclusion in federal workplaces,” she said in the statement. “We look forward to reviewing the recommendations and working together to create an even more diverse, inclusive, and safe workplace for all.”

MIXED FINDINGS AND A LACK OF FOCUS

To create the report, researchers collected data between May 19 and November 9, 2020, using sources including “46 semi-structured interviews, 272 documents, and 932 survey responses.”

In a snapshot of the federal departments surveyed, the report stated that some of the strengths of the departments were employee groups dedicated to getting the voice of LGBTQ2S+ employees heard, positive space training to educate employees on LGBTQ2S+ concerns, LGBTQ2S+ liaisons or champion, and “good efforts” at “a handful of participating entities” to making it easier for transgender employees to feel supported while transitioning at work.

But the report highlights several places where improvement is needed.

“All participating federal entities appear to be lacking a clear and specific [equity, diversity and inclusion] strategy or explicit goals in support of LGBTQI2S people in federal service,” the report states.

There are still “significant gaps” in ensuring trans-positive policies across the federal departments, and while employee resources groups exist, they don’t always receive the resources they need and are instead run on “personal time and with personal resources.”

And across the departments, there were few signs of onboarding policies that laid out resources and support for LGBTQ2S+ people, and “very few efforts to expand LGBTQI2S representation or reduce bias within recruitment and related processes.

When it comes to discrimination and harassment in the workplace, many departments were not equipped to properly track LGBTQ2S+ harassment, relying predominantly on “informal resolution mechanisms” rather than clear repercussions.

Although a large number of employees reported feeling comfortable being open about their LGBTQ2S+ identity at work, some survey respondents also indicated that they believed discrimination had affected their career. Immigration, Refugees and Citizenship Canada was highlighted as an organization where “data suggests the possible existence of bias in career advancement processes,” for LGBTQ2S+ employees, the report noted.

“In survey findings, most participating entities had some respondents who said that their sexual orientation, gender expression and/or gender identity had, to some degree, negatively impacted their career advancement,” the report stated. “This implies that bias remains an issue in several aspects of the workplace.

“We also noted a lack of training for recruiters on how to actively address bias, as well as a general lack of cultural competence for working with trans candidates.”

The report also got into specifics with the departments involved in the report.

With the RCMP, there “was a lack of policies made available for review,” the report noted, meaning they might be missing some of the picture.

While the RCMP has a comprehensive guide to supporting trans, non-binary and Two-spirit employees, it still has room for improvements, the report stated, adding, “it is important that symbolic gestures such as social media communications and the inclusion of rainbow symbols at RCMP sites be backed up by actions in the workplace itself.”

The report added that there is little collaboration between divisions on LGBTQI2S initiatives.

“RCMP is at the very beginning of efforts towards LGBTQI2S inclusion,” the report concluded. “Simultaneously, the organization is also in the process of addressing discrimination against several other marginalized groups. This is a clear opportunity for RCMP to undertake significant cultural and structural changes with an intersectional approach.”

The Department of National Defence (DND) is one of the departments that seemed to have the fewest policies aimed at increasing LGBTQ2S+ inclusivity and safety.

While they have a thorough protocol for submitting complaints if there is discrimination or harassment, their policies haven’t been formulated with LGBTQ2S+ concerns in mind. The report noted that they were not able to access documentation for “several assessment themes,” and that there are no policies at DND regarding supporting trans employees or training for hiring managers that may be working with trans candidates.

Other departments have made serious progress in several avenues of inclusion.

Employment and Social Development Canada have developed a guideline for transitioning in the workplace, for example, which was created by four trans employees, and also has training for managers to ensure they can support their trans employees and colleagues.

While the Canadian Armed Forces has made steps forward, according to the report, such as creating the Transitioning in the Workplace Toolkit and ensuring uniform style is informed by personal choice and not by a gendered dress code, the report noted that most of their current diversity policies are too general, without specific policies regarding LGBTQ2S+ people.

This was a common theme, as the report noted Canada Revenue Agency and Global Affairs Canada also were in need of addressing more specific LGBTQ2S+ concerns.

Across the various departments, “policies themselves often do not include specific LGBTQI2S consideration,” the report said. “This was particularly clear within benefits, leave, and hiring policies.”

Although leave policies are generally inclusive in terms of what “family” and “partners” looks like, there are blind spots, such as parental leave being differentiated by the “assigned sex of the parent.”

“We saw a general lack of knowledge within senior management and HR professionals on how benefits and leave policies apply to LGBTQI2S individuals and families," the report states.

There is also varying healthcare coverage for specific gender-affirming procedures — while the Federal Public Service healthcare plan, for instance, covers hormone therapy, it does not cover surgeries, leaving employees to depend on the province, leading to gaps in coverage.

The report noted that one limitation was that they largely were not able to survey “frontline staff/lower rank personnel”, which may leave gaps in their knowledge of the atmosphere for LGBTQ2S+ people in those roles, and discrimination they may face.

Some of the foundational recommendations for all federal departments included:

“Overall, we saw that many federal entities are taking steps toward improving LGBTQI2S EDI, and there is generally a willingness to improve workplace inclusion for LGBTQI2S people within the federal workplace,” the report states. “However, efforts are not always consistent across the participating bodies and there remains significant work to be done.

“Thus far, much of the work to improve inclusive practices for LGBTQI2S people is coming from the victims of this discrimination themselves, and often on a voluntary basis. It is essential that the government take a proactive approach moving forward, so that it can truly reconcile the harm caused to LGBTQI2S communities and move beyond the Purge."