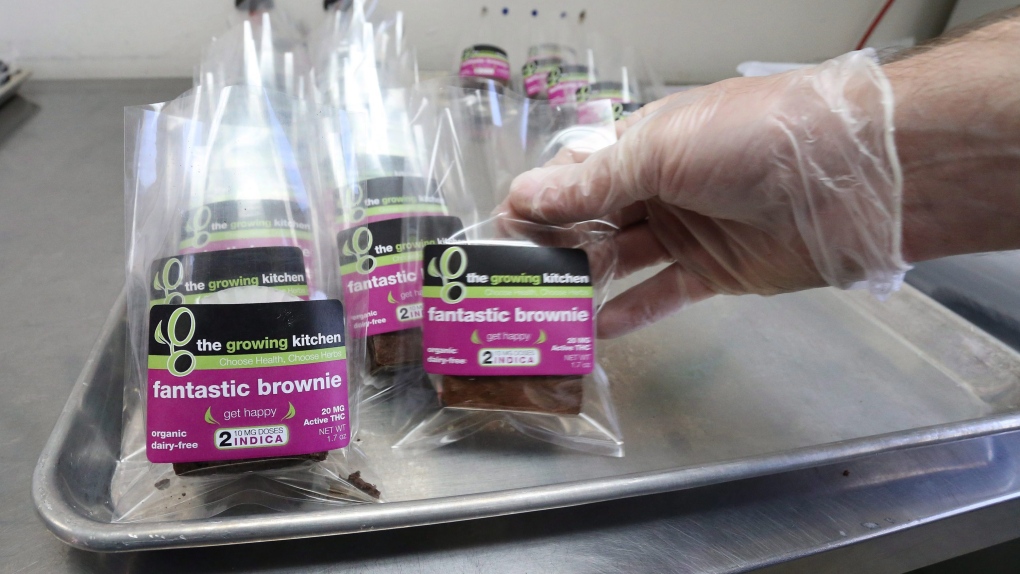 When marijuana becomes legal for recreational use next year, nearly half of Canadians will want to try edible marijuana products, a new study says, even though it remains unlikely that such products will be commercially available.

“Curiosity seems to be driving consumers to want to try a food product, an edible, and the number one choice is bakery goods,” Dr. Sylvain Charlebois, the study’s lead author, told CTVNews.ca.

Charlebois, a professor of food distribution and policy and the dean of Dalhousie University’s Faculty of Management, penned ‘Cannabis-infused food and Canadian consumers’ willingness to consider recreational marijuana as a food ingredient’ with Dr. Simon Somogyi, an associate professor at Dalhousie’s Faculty of Agriculture.

In a survey of 1,087 people, the researchers found that 46 per cent of Canadians would try cannabis-infused food products such as baked goods, oils and spices if they were commercially available. Thirty-nine per cent said that they would be willing to try such products in a restaurant. Only 20 per cent said they feel knowledgeable enough to try making marijuana-infused foods at home.

“I think there’s a huge void around public education with marijuana,” Charlebois said. “As a group of researchers, we’re very concerned that we’re just not having this discussion right now around edibles.”

The federal government plans to legalize the recreational use of marijuana by July 1, 2018. But in its current form, Bill C-45, also known as the Cannabis Act, does not include the legalization of edible products, such as marijuana-infused baked goods. The federal government has said that it plans to deal with such products, which are commonly known as “edibles,” at a later date, but that only dried cannabis, fresh cannabis, cannabis plants, cannabis seeds and cannabis oil will be legally available for purchase next year. Of these products, only cannabis oil can easily be consumed without smoking.

“It’s clear that the government has its head in the sand,” Charlebois said. “Pretending that edibles don’t exist is somewhat misguided because they do exist.”

In early September, the Ontario government became the first province to detail how it plans to sell and distribute marijuana for recreational use. Edible products are prohibited in the province’s current plan. But in its recommendations for medical marijuana use, Health Canada emphatically recommends against smoking the plant (though it also states that eating cannabis can delay, heighten and prolong its effects).

“Health Canada actually recommends ingesting marijuana instead of smoking it for medicinal use,” Charlebois said. “It’s healthier! So, if people are tempted to try marijuana but they don’t want to damage their lungs, the edible solution becomes a very attractive one.”

The Dalhousie study also surveyed Canadians’ attitudes towards recreational marijuana. Sixty-eight per cent, the study said, support legalization (at 79 per cent, respondents in British Columbia were the most supportive while those in the Prairies were the least at 54 per cent). The study also suggested that Canadians do not believe that edibles will replace alcohol in their lives.

“Our point is, regardless if C-45 will allow it or not, people will actually try [edibles] one way or the other,” Charlebois said. “I think we need to legalize edibles and make sure we have the proper regulatory framework to support it.”

Failing to do so, Charlebois said, will mean the continued existence of a thriving black market in marijuana-infused food products. And a lack of dosage and packaging regulations for edibles means that children will remain at risk, Charlebois said, confirming the fears of the 59 per cent of people in the study who worry about the dangers legalization will create for children and young adults.

“For parents out there, if you don’t have the proper regulatory framework, Halloween will become much more scarier than it is now,” Charlebois said. “Going through bags of candies, you never know what you can find… Like cannabis-infused gummy bears? Are you serious? That’s what they were finding in Colorado before they banned them.”