OTTAWA -- According to new data from the Canada Border Services Agency, more than 10,000 U.S. citizens have been turned away at the Canadian border during the pandemic — and almost half of them were hoping to enter Canada to shop, go sightseeing or simply for recreation.

According to new figures sent to CTVNews.ca by the CBSA, 10,329 U.S. citizens have been turned away from our shared border between March 22 and July 12. More than a quarter of them were barred from entering after revealing they were coming to Canada to sightsee, despite the ongoing COVID-19 pandemic.

While half of the U.S. citizens were turned back for “other” reasons, which the CBSA did not expand on, a little over 2,700 citizens had to turn back when they said they were hoping to cross the border for "tourism" or "sightseeing." More than 1,200 were rejected after revealing their trip was recreational in nature.

More than 500 Americans were sent back home after they said they were coming to Canada to shop, despite physical distancing measures that have prevented Canadians themselves from frequenting their own retail stores.

Canada shut its borders to foreigners in mid-March, initially exempting U.S. residents from the new rules. But within days the Canada-U.S. border had also shuttered to all non-essential travel, an agreement that sources told CTV News on Tuesday would be extended to August 21.

The current agreement has exemptions in place for the flow of trade and commerce, as well as temporary foreign workers and vital health-care workers such as nurses who live and work on opposite sides of the border. However, tourists and cross-border visits remain prohibited.

It’s not just Americans who have been turned away.

From March 22 to July 12, more than 800 non-U.S. foreign nationals were turned away at various ports of entry because they were hoping to do some shopping in Canada. More than 500 were turned away because their visit to Canada was for tourism, sightseeing or recreational purposes.

"All persons arriving in Canada at an air, land, marine or rail border will be asked about the purpose of their visit and whether they are feeling ill or unwell," CBSA spokesperson Rebecca Purdy said in a statement emailed to CTVNews.ca.

However, despite these efforts, some U.S. citizens have made their way across the border and been fined in Canada after failing to follow public health rules. A Florida couple was issued provincial offence notices and each received a $1,000 fine after they entered Canada in Fort Erie to attend a seasonal property on July 3. The two did not comply with the 14-day period of self-isolation after entering the country.

Another American couple, who entered Canada on June 24 near Thunder Bay, Ont., were also fined for breaking quarantine rules. They were spotted multiple times in an Ontario town, despite being told to isolate for 14 days upon their arrival. 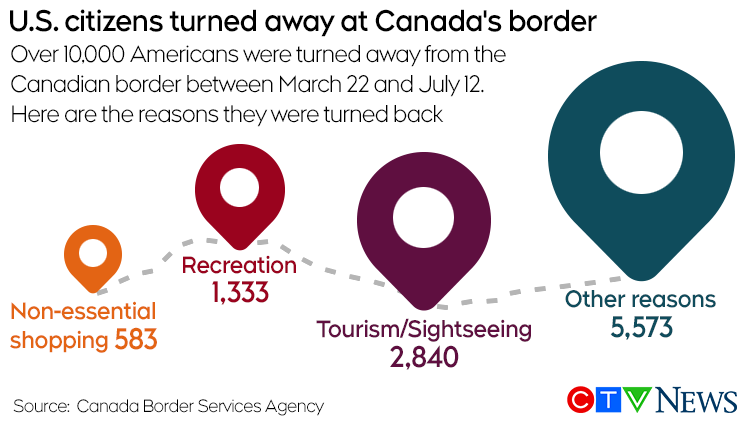 While there is an exemption allowing Americans to travel through Canada to reach Alaska, some U.S. citizens have been caught using this loophole to break Canadian rules. The Alberta RCMP issued six tickets to American travellers who decided to stop near Lake Louise for long hikes in the park in mid-June.

According to Deputy Chief Public Health Officer Dr. Howard Njoo, most travellers arriving in Canada have been willing to play by the rules. However, he had a message during his Tuesday press conference for those who are considering breaking COVID-19 precautions.

"If you are coming from outside of Canada, please understand all of the efforts that Canadians have done inside of Canada to flatten the curve and to make sure that the transmission of the virus is as low as possible," Njoo said.

"Please do your part."

Why a closed border hasn't kept international flights out of Canada

This is how teachers across Canada feel about reopening schools

Profile of a killer: Unravelling the deadly new coronavirus