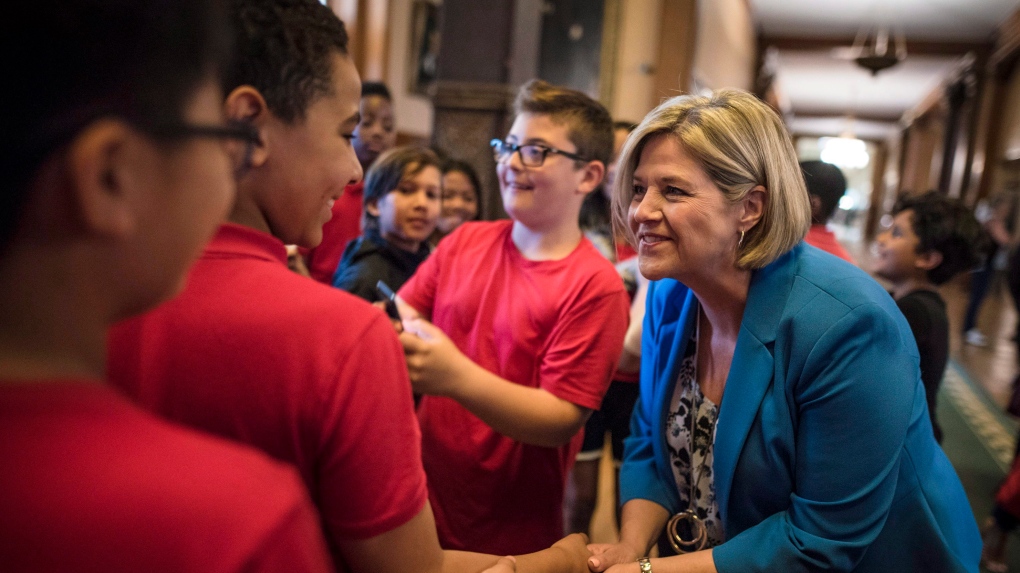 TORONTO -- NDP Leader Andrea Horwath vowed Thursday to hold Doug Ford accountable for every decision he will make as Ontario's next premier, saying her party would be a voice for the majority of people in the province, who did not vote for Ford's Progressive Conservatives.

Horwath, whose party will be the official Opposition once the new government is sworn in on June 29, said many Ontario residents are worried about possible spending and service cuts under a Tory government.

The New Democrats won 40 seats in last week's election, which also saw the governing Liberals reduced to seven seats, putting them below the threshold for official party status.

Ford, whose party won just over 40 per cent of the popular vote, has pledged to find billions in unspecified "efficiencies" each year but also maintains there will be no job losses as a result of government belt-tightening.

"People are pretty worried about what Doug Ford has in store and so am I," Horwath told her caucus.

"The majority of Ontarians did not vote for cuts to health care, or layoffs for more nurses or more teachers, or the privatization of the things that we all own, the things that matter most to all of us."

Horwath said the Progressive Conservative leader also needs to address controversies that emerged during the election campaign, including questions surrounding certain party nominations and allegations that some of his candidates may have used stolen data to their benefit.

Ford said during the campaign that he acted immediately on the allegations and had cleaned up the "mess" in his party, blaming his predecessor for any problems.

Asked how she could challenge Ford given his party's control of the legislature, Horwath said the New Democrats would act as a forceful and diligent Opposition.

"What we will be doing is making sure Mr. Ford is quite aware of the concerns and worries that Ontarians have about his intentions," she told reporters.

Laura Mae Lindo, one of the party's rookie legislators, said the makeup of the NDP slate will inevitably bring change and a variety of perspectives to the legislature.

"I think part of the change is having 40 people -- a lot of women at that table, a lot of people of colour at that table -- that are set up in Opposition. I think that that's a huge change on its own," she said.

"I think that what we'll see, the nuances that we'll see in decisions, will be something that will have to make everybody think, not just the government but also the people in Ontario."