With the hours ticking down until cannabis legalization, a new Nanos Research survey suggests the majority of Canadians are not interested in smoking marijuana.

The survey conducted for CTV News found that 71 per cent of those polled were not interested in smoking marijuana once it’s legal in Canada.

Eight per cent said they were interested in smoking marijuana upon legalization. Two per cent of those surveyed were unsure.

Pollster Nik Nanos says the results of the survey reflect the current smoking culture in Canada.

“Governments have spent decades demonizing smoking, and even though they’ve legalized something and allowed for smoking marijuana I don’t think that means that there’s going to be a new renaissance in how people feel about smoking in general,” he told CTVNews.ca in a phone interview.

The question becomes: Will this mentality change with time? The answer, Nanos believes, is something that will be revealed in the coming months and years.

“I consider this a benchmark of the old Canada, with a new Canada starting this week. One that has the consumption of marijuana,” he said.

“We should be looking at what the trend is over time because as the consumption of marijuana and cannabis becomes legalized and normalized, it’ll be interesting to see whether over time people feel a little more open to experimenting and trying cannabis and marijuana.”

According to the survey, 88.6 per cent of respondents in Quebec were not interested in smoking marijuana, the highest of all the provinces surveyed. British Columbia had the lowest number of respondents who said they were uninterested, at 73.6 per cent.

“In British Columbia there tends to be more of an attitude of acceptability related to the smoking of marijuana. At least in Quebec it could quite very well be for Quebecers the reason that there’s not an interest is that culturally they’re probably more into traditional consumption of alcohol and wine,” Nanos said. 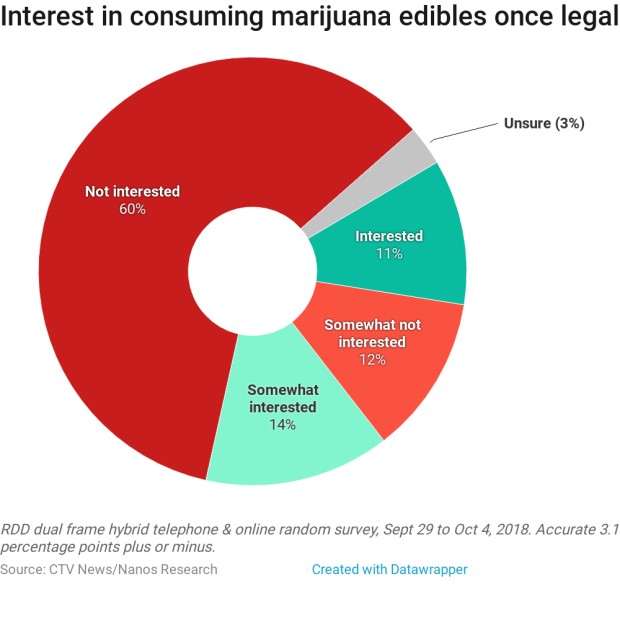 The survey found that a larger proportion of Canadians – 25 per cent – are interested or somewhat interested in consuming marijuana in an edible form or a drink once legal.

Meanwhile, only 11 per cent said they are planning to or considering growing cannabis at home. Up to four marijuana plants per household will be allowed for personal use, as of Oct. 17. 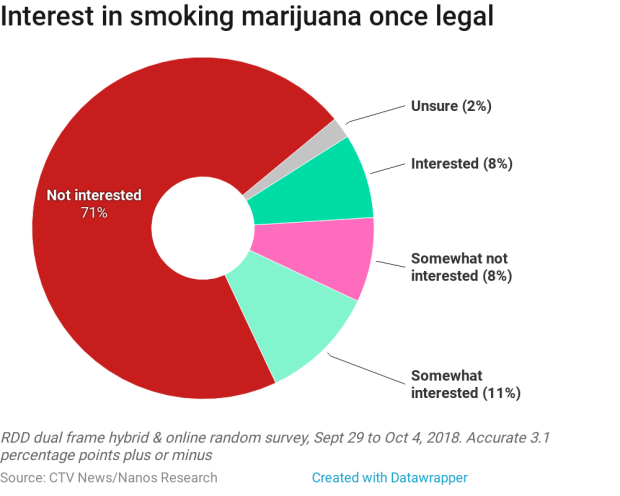 It would also appear that most respondents are concerned about second-hand marijuana smoke in private locations such as apartments and houses.

Cannabis legalization comes into full effect on Wednesday. Canada is only the second country in the world to legalize cannabis. The first was Uruguay. 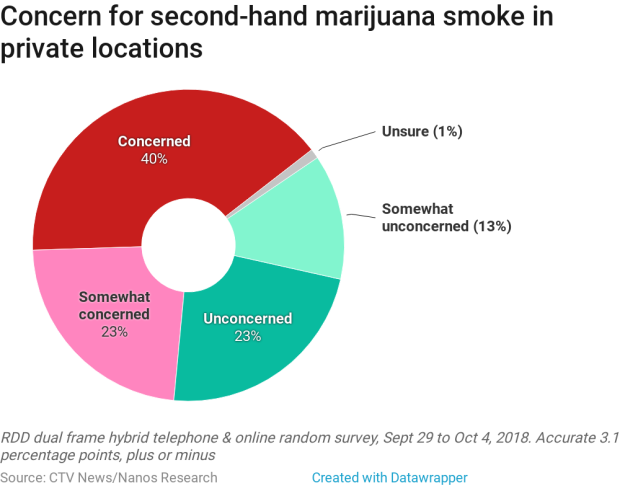 These observations are based on a hybrid telephone and online random survey of 1,000 Canadians, 18 years of age or older, between Sept. 29 and Oct. 4, 2018 as part of an omnibus survey. Participants were randomly recruited by telephone using live agents and administered a survey online.