TORONTO -- Canadians' views on future generations' standard of living are at the lowest point since data started being collected on the topic by Nanos Research nearly 10 years ago, said the company's chief data scientist Nik Nanos on the latest episode of Trend Line.

"That 63 per cent is the highest that we've seen since we started tracking this about 10 years ago," said Nanos on Trend Line.

For Nanos, a combination of factors could be driving the pessimistic responses.

"There's still people that are worried about the pandemic… if you happen to be in British Columbia, you've dealt with floods, you dealt with fire," said Nanos. "Now we have inflation, where people are just worried about paying the bills for basic items." 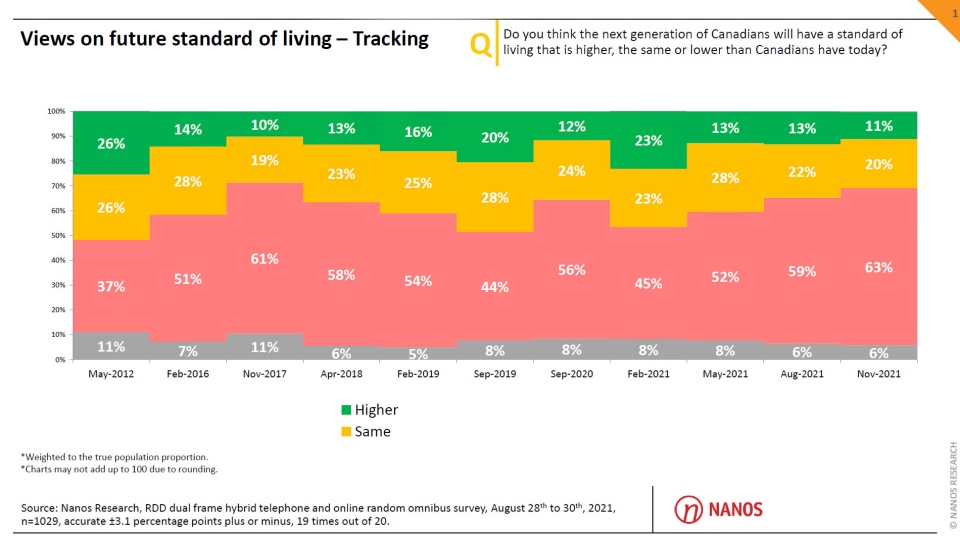 Add it all together and you have what Nanos calls a "cocktail of pessimism" driving our perception about the future standard of living.

As Nanos explains on the show, the findings of the survey should be a message to political leaders.

"I think not just for the Liberals, but for all of the federal parties, here's what people want to hear about what are … parties proposing, including the government," said Nanos.

You can watch the full show by clicking on the video attached to this article or you can listen wherever you get your podcasts.