N.S. man believes he was bitten by rare venomous spider

A Nova Scotia man was stunned to learn that what he thought was a simple mosquito bite was likely a bite from a dangerous spider.

Stephen McKellar, of Middle Cornwall, N.S., noticed last Wednesday that his leg felt tender, and saw what he described as an “oversized mosquito bite.”

By Thursday, there was a large, dark red spot the size of the baseball on his thigh. His wife, Megan McKeller, told her husband to go see a doctor.

“I could tell that it was really bothering him,” she told CTV Atlantic, “so that’s when I thought this was something that’s not a horsefly. Something we should be concerned about.”

But McKeller refused to take his wife’s advice and instead tried using the over-the-counter antihistamine medication Benadryl.

McKeller said, by Friday, “it was to the point where, obviously, the Benadryl and whatnot wasn't working and I got a little concerned about infections.”

He finally went to the emergency room at the local hospital and a doctor ordered intravenous antibiotics. He says a doctor told him it was likely a bite from a brown recluse spider. 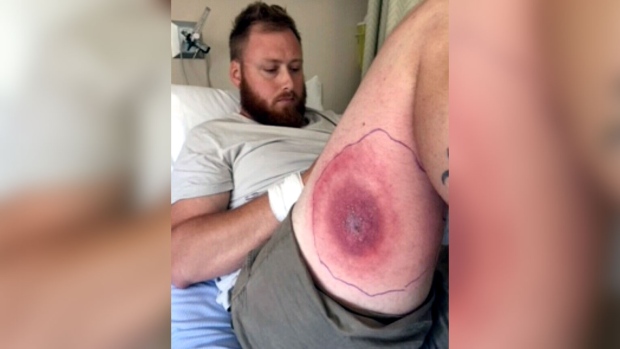 When a recluse spider bites, it releases a poisonous venom that can sometimes lead to the loss of a limb. In children, the spider’s bite is sometimes fatal.

Some people have no reaction to the bite at all. In others, the body reacts by killing off skin cells as it attempts to prevent the spread of the poison, leaving behind a dark or black patch that can take up to six weeks to heal.

“His bite is now basically going to be treated as if it were a burn because… of the necrotic venom, so his skin is going to break down as it heals itself,” Megan McKellar wrote in a Facebook post.

McKellar has since been released from the hospital.

As for how McKellar got the bite, he’s been told the spider likely came in on fruit imported from the United States, such as grapes or bananas. The spider is reclusive – hence its name – and will hide in dark places – such as the closet where McKellar kept his shorts on the floor.

The McKellers say their experience should be a reminder to always check your fruit for insects.

“Please people, CHECK YOUR FRUIT," Megan wrote. "I cannot imagine what would have happened if this spider bit one of our girls, after seeing what it's done to a grown 6 foot, 240lb man…”

How spiders can enter grocery stores

Relatives of the brown recluse, scorpions and black widow spiders have turned up in Canada before, a circumstance Ewing attributes to the way we ship fruits and vegetables.

“I think because as people have become more concerned about chemicals and sprays on food, there's more things living in our food and produce," he said.

It’s become common for produce to be chilled rather than sprayed with chemicals during transportation, creating conditions that are ideal for spiders.

"Things like insects and arachnids, when you cool them down, their metabolism drops really low, they just grow quiet and still and they wait it out. And very often the first time they wake up again is when they're unpacked in the back room of a grocery store," Ewing said.

Experts say that rinsing fruits that come in bunches, such as grapes and bananas, can be a useful precaution to prevent the spread of potentially dangerous spiders.

With a report from CTV Atlantic’s Ron Shaw