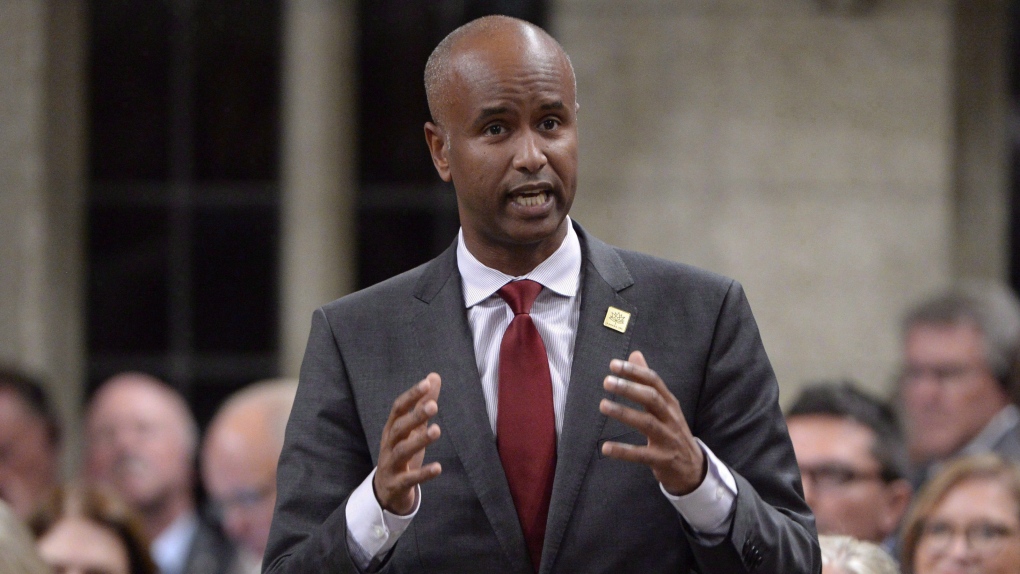 Minister of Immigration, Refugees and Citizenship Ahmed Hussen during question period in the House of Commons on Parliament Hill in Ottawa on Tuesday, Sept.26, 2017. (Adrian Wyld / THE CANADIAN PRESS)

ST. JOHN'S, N.L. - A Newfoundland woman says one wrong checked box in a stack of paperwork wiped out thousands of dollars and years of effort to bring her family to Canada from India.

Leena Raju says a five-year application ban for an honest mistake has made her feel like a criminal. Experts say her case is all too common.

"It's really tragic," immigration lawyer Evelyn Ackah said from Calgary. "The fact that something so minor could affect her ability to be reunited with members of her family, I think it's heart-breaking and I think it's unjust."

Ackah and other lawyers who guide clients through a bureaucratic maze say it's time for change.

The immigration law section of the Canadian Bar Association was to meet this week with federal officials in Ottawa. They're calling on Immigration Minister Ahmed Hussen to improve communication and help fix gaffes that penalize applicants who must appeal to the Federal Court - if they can afford it.

"I'm all by myself," Raju said as she held a ream of documents at her home in St. John's, N.L. "I need family with me. I've been here for a long time, paying all these taxes and everything.

"I don't have any criminal record. I've never had one parking ticket."

Raju arrived in St. John's in 1990 and became a Canadian citizen five years later. She has worked as a personal care assistant, choosing to remain single and focus on sending money to loved ones back in India.

She is especially close to her niece, Stellarani Arputharaj Chandru and her husband, Vincent. Their son Joshua is 11 and their 12-year-old daughter, Viancia Leena, was named for Raju.

Her bid to bring them to Newfoundland started in 2009 when she lined up a job for her niece as a nanny in St. John's. That fell through when the pregnant woman who was to sponsor Chandru realized how long the process would take.

Raju assumed that meant a related application for a work permit under the Live-in Caregiver Program would also be stopped. It wasn't.

Raju says the family never received that document. And months later, when she applied for permanent residence for her niece and family, Raju did not acknowledge the refused work permit - an omission Immigration declared "misrepresentation."

The department in an emailed statement said the application was refused in January 2015 "because the visa officer was not satisfied that (Raju's niece) had demonstrated any recent attempts to address her deficiencies in her English language ability, training and work experience."

Raju was also barred from re-applying for five years. Since then, she has written to successive immigration ministers asking for help.

She said her niece narrowly missed the required grade on a written English exam in 2014 but Raju disputes other parts of the assessment, noting she teaches school in Ooty, a rural town in southern India.

Her niece answered questions in English during an internet phone call.

"We want to stay with my auntie and we'd like to live in Canada," she said. She especially wants a better education for her children.

"I really hope there will be some pressure put on the government ... to at the very least remove the bar so that this woman can reapply with proper legal advice."

Ackah said her office has repeatedly had to follow up with Immigration when approved documents sent by the department failed to arrive. They're usually sent by regular mail or email with no consistent tracking system, she said.

"They put people's wrong name, dates of birth, on forms. It's a human system. But yet they don't look at the human side of it as the applicant. They're the only ones that can make mistakes."

The immigration minister's office did not answer requests for comment.

Barbara Jo Caruso, head of the bar association's immigration section, said federal officials are working to avoid situations like Raju's plight. They could start with a streamlined appeal option, she said.

"If there's an administrative office that can quickly review these decisions then not only will it improve client service, it will avoid cases going to the Federal Court where individuals are forced to hire a lawyer to have the matter judicially reviewed."

MPs' offices are typically swamped with complaints from constituents who can't get updates on immigration cases or who've paid high-priced consultants for little help, Caruso added.

Immigration offices have closed over the last two decades. There are long waits to reach anyone on the phone.

"It's tough for people to navigate the technology, the website, the forms, and not have any sort of guidance," Caruso said from Toronto.

Back in St. John's, Raju dreads having to wait until 2020 for another chance at happiness.