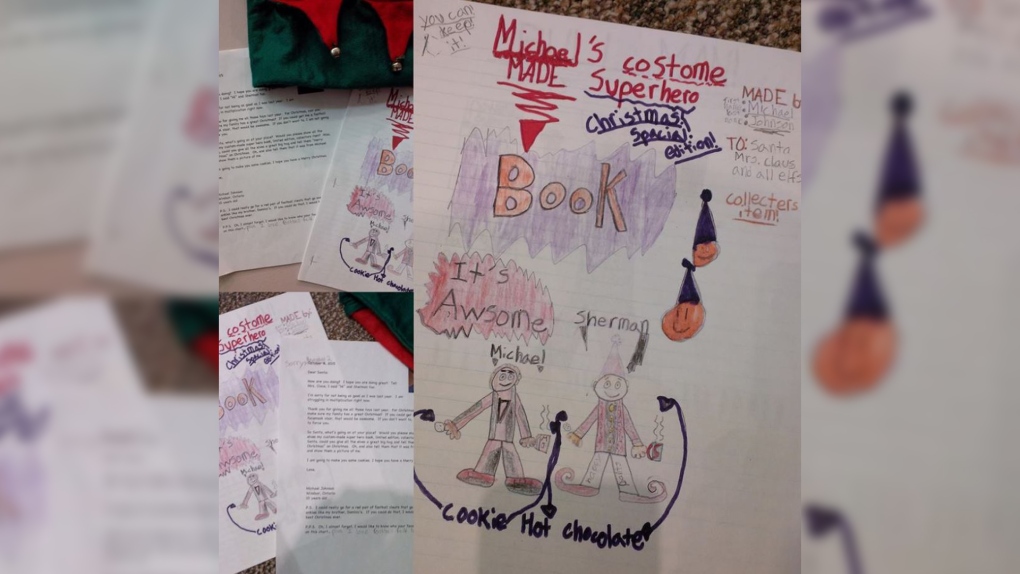 Canada Post is looking for Michael Johnson, who mailed this letter and drawing to Santa without a return address.

Thanks to a little help from social media, and possibly a pinch of Christmas magic, a 10-year-old boy who forgot to put a return address on his letter to Santa Claus will finally get a letter back.

On Friday afternoon, Canada Post posted a photo to Facebook of Michael Johnson’s letter to Santa. Enclosed was a comic book the boy drew by hand, and a packet of hot chocolate -- a special gesture to get on the “nice” list.

The post office asked anyone who knew the boy to send them a private Facebook message so they could “make sure Santa’s letter arrives safely.”

After CTV News also shared the story to Facebook, Michael’s mother, Amy Johnson, was tagged by a friend within minutes. When she called Michael to the computer to show him the post, his face lit up.

“He couldn’t believe it, he just had huge eyes,” Johnson said. “He’s just thrilled that Santa is going to write back.”

It had been weeks since Michael mailed his letter, and his mother said he was confused why he hadn’t heard back.

“I would check the mail every day and every day I said, ‘Sorry Michael, it’s not there,’” she said. “He was kind of disappointed. You could see in his face, he was wondering what went wrong.”

Now, Canada Post said it’s making sure that Michael’s letter makes it to the North Pole.

Johnson, a single mother of five boys in southern Ontario, said she’s thankful that someone took the time to go the extra mile for her son.

“It just kind of rejuvenates your faith in humanity that someone took the time to make something special for this kid,” she said

Michael took plenty of care crafting his letter to Santa. The comic book had its own world of superheroes, each with their own unique superpowers, and Michael attached a survey so that the elves could vote for their favourite.

Johnson believes the story was shared so quickly for a simple reason: “It’s nice.”

As the discovery unfolded in front of the computer, one of Michael’s brothers came downstairs to check on the commotion.

“We were reading the responses and he said, ‘Mom, I think Michael just went viral.’” Amy said.

Children who write to Santa at the North Pole (postal code H0H 0H0) will get a letter back, but only if a return address is provided.