Muslims proudest to be Canadian, despite 'concerning' discrimination: Environics 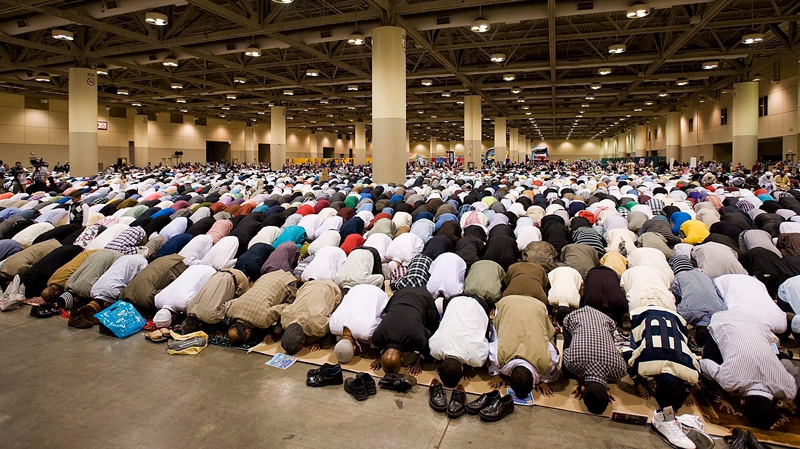 Muslims pray at the Muslim Association of Canada's Eid celebration that marks the end of the holiday of Ramadan at the Metro Convention Centre in Toronto on Tuesday, Aug. 30, 2011. (Aaron Vincent Elkaim / THE CANADIAN PRESS)

Canadian pride is strongest among Canada's Muslim population, despite facing discrimination levels that are well above those experienced by the general population, according to a new survey.

The discrimination rate against Muslims was unchanged from the last Environics survey, in 2006. Muslims also experienced 50 per cent more instances of discrimination based on religion, ethnicity, language or sex than the general population, according to the study. However, the 2016 survey shows Muslims are more positive about living in Canada than they once were. Eighty-four per cent of respondents said they felt Canada treats Muslims better than other Western countries – an increase of seven per cent over the 2006 results.

When asked to identify the most prominent issue facing the Muslim community, 35 per cent of respondents said discrimination and the way they are treated by the public is the top issue, followed by interactions between cultures, at eight per cent. One third (35 per cent) of respondents also indicated that they expect future generations to face more anti-Muslim discrimination that they face now, although 90 per cent said they believe the new federal government will improve relations between Muslims and other Canadians.

Olive Tree Foundation's Muneeb Nasir, who partnered with Environics on the survey, said the results help researchers "look beyond the rhetoric and perceptions" about Muslims in Canada.

"Quite importantly, it shows that Muslims take their citizenship seriously and are very proud to be Canadian, more so than others in the country," Nasir said in a news release from Environics.

She added that it is "concerning" to see 35 per cent of Muslims report experiencing discrimination in the country.

The survey found that the Muslim faith is growing stronger in Canada, with respondents reporting an increase in the frequency with which they attend their local mosques, when compared to 2006. Female Muslims also indicated that head coverings are becoming more prevalent among their numbers, with 53 per cent saying they wear a hijab, chador or niqab in public. In 2006, that rate was at 42 per cent. The survey found that head coverings have become particularly prevalent among women aged 18 to 34, with 60 per cent of them saying they cover their head when going out in public.

The survey by Environics Institute was conducted with a representative sample through telephone interviews of Muslims age 18 and older, between Nov. 19 and Jan. 23. The margin of error is plus or minus four per cent, in 19 out of 20 samples.

The survey of non-Muslims was also conducted by phone using a representative sample of 987 individuals, 18 or older, between Feb. 6 and Feb. 15. The margin of error is considered plus or minus 3.1 per cent, in 19 out of 20 samples.