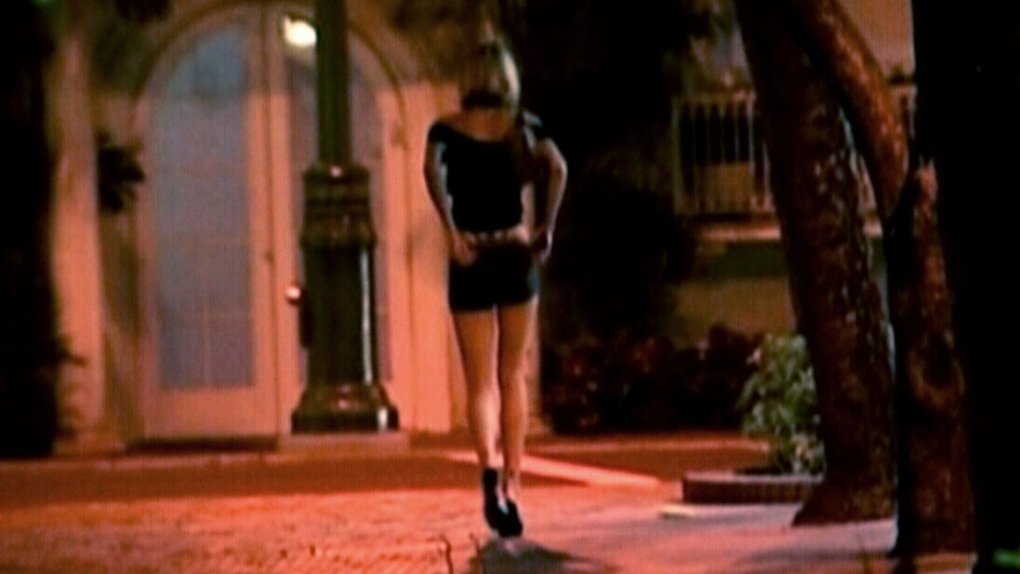 A sex worker walks down the street.

MONTREAL -- The recent killing of a 22-year-old woman in Quebec has focused renewed attention on Canada's prostitution laws, which critics say are applied irregularly across the country and only make sex work more dangerous.

People connected to the industry say the Jan. 22 death of Marylene Levesque in a suburban Quebec City hotel has exposed hypocrisy in the way the law is enforced in this country and highlighted the cowardice of Canada's political class on the issue of sex work.

Sold to the public in 2014 as a way of protecting women in the sex trade, Bill C-36 has pushed women who sell sexual services into becoming "invisible," Sandra Wesley, an advocate for women in the sex industry, said.

"We have to make more and more compromises in terms of our safety so the client feels safe (from arrest)."

Eustachio Gallese, 51-year-old convict out on day parole, has been charged with second-degree murder in Levesque's death. He was imprisoned for murdering his wife in 2004 and had been convicted of assaulting a previous partner, but as part of his day parole, a "risk-management strategy" was developed to allow Gallese to meet women to respond to his "sexual needs."

Wesley argues that Levesque, who was a sex worker, was placed in danger by the stricter laws governing prostitution.

Before 2014, Wesley explained, a man could pay a woman to have sex in a private hotel room and no one was committing a crime.

But under Bill C-36, purchasing sex or benefiting from the selling of sex is illegal. Sex workers cannot advertise sexual services, and potential clients cannot communicate with a prostitute in any way, or in any place, for the purposes of buying sex.

Although the law protects the sex worker from criminal liability, clients or the employer, such as a massage parlour, face arrest and prosecution.

Wesley said a woman in a hotel room with a client doesn't want to bring attention to herself, out of fear hotel staff will call police. Instead of screaming or running out of the room to the front desk, sex workers have learned to attempt to take care of hostile situations on their own.

There are other instances where the law forces women into dangerous situations.

Before, prostitutes could lean on a car window and negotiate services and a price with a client. They could take the time to inspect the car -- and the man -- to spot anything suspicious.

But now, Wesley said, the act of negotiating services is illegal. "We have to jump in the car really fast as soon as it slows down," she said, referring to the women her organization represents.

Local media reported that Gallese had been banned from the massage parlour where Levesque worked after he had been aggressive. Wesley says massage parlour owners across Quebec are reluctant to report dangerous clients to police because they run the risk of being arrested or losing their business.

Yanik Chicoine, owner of a massage parlour in the east-end Montreal neighbourhood of Hochelaga-Maisonneuve, agrees that most parlour owners don't dare call police if a client becomes problematic or if other trouble occurs.

"I can say the majority of them would not call the police. Because they are afraid," said Chicoine, head of a massage parlour association that represents about 50 establishments in the province.

But Chicoine says he would welcome arrest to put the country's prostitution laws to a legal test.

Chicoine said he's ready to go all the way to the Supreme Court. "If they come to arrest us, we are definitely already prepared ... to assert the rights of sex workers and their clients," he said in a recent interview.

But so far, he said, the police have left him alone, as long as he doesn't hire minors or have ties with organized crime.

La Montrealaise is located in a low-income neighbourhood that was previously home to many women selling sex from the street. The police, he said, prefer that the women work indoors, in a safe environment.

Levesque's murder exposed other problems in the way the law is enforced. Although the parole board called the strategy "inappropriate," documents show Gallese was permitted to meet women strictly for sexual purposes. It was essentially a green light to break the law and hire prostitutes.

Stan Stapleton, president of the union that represents parole officers, said he was informed the suspect saw Levesque in a hotel because he was no longer permitted by the parole board to visit massage parlours.

Stapleton said in a recent interview his office had received calls from correctional employees in different parts of the country saying the practice of letting offenders purchase sex was rare, but it did occur in the past.

A spokeswoman for Correctional Service Canada, which employs parole officers, said it is taking the union's allegations seriously. "Let us be clear that the Correctional Service of Canada does not support offenders soliciting sexual services," Esther Mailhot said in an email.

Federal Public Safety Minister Bill Blair has launched an investigation into the circumstances that led to Levesque's death.

Blair was unavailable for an interview, and his office did not address specific questions about prostitution laws being ignored or loosely enforced, and whether the federal government plans to modify the legislation.

In an email, his spokeswoman, Mary-Liz Power limited her comments to the Levesque case, saying the investigation launched by Blair "will determine whether or not correct protocols were followed in this case, and shine a light on which systemic changes could help ensure that a tragedy like this never happens again."

Wesley says she has been told by politicians that they realize that Canada's current prostitution laws aren't working. She says they are reluctant to act because they are worried about being portrayed as encouraging the proliferation of the sex trade.

"We know that their concern right now is whether or not decriminalizing sex work will affect their re-election chances," she said.