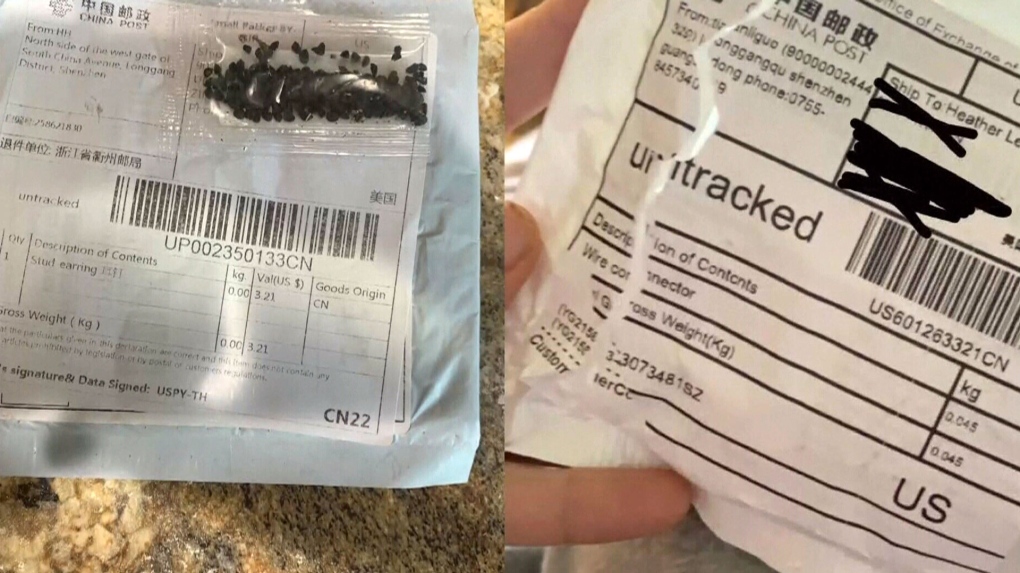 A package of unsolicited seeds is seen in this image.

TORONTO -- The Canadian Food Inspection Agency has received more than 750 reports of unsolicited seeds sent to Canadians across the country.

In a news release, the CFIA said Canadians in each province have received the mysterious packages, though there haven’t been any reported seed deliveries in the territories.

“In collaboration with the Canadian public, the CFIA continues to collect information on these unsolicited seed packages, including information about the contents, on the sender, return address (if any), postmark, and how the package was labelled,” the release states.

The CFIA said the packages are sent from several countries and are usually declared as toys or jewelry, which makes it difficult to catch at the border.

The seeds are from a variety of plants, including tomatoes, strawberries, roses and citrus plants. Some of them contained weeds found in Canada, including shepherd’s purse and flixweed.

“Based on visual inspections carried out to datethe seeds appear to be low risk, however Canadians are being cautioned to not plant these seeds from unknown origins,” the CFIA said.

The agency said it’s still unclear where the seeds are coming from and why people are receiving them, although some of the recipients had ordered seeds in the past.

The United States Department of Agriculture has said the seeds are believed to be part of a “brushing scam,” in which a company sends packages to unsolicited destinations and uses the order to boost customer reviews to improve their standing online.

The CFIA said it is considering all options, including the possibility of a brushing scam.

Anyone who receives some unsolicited seeds in the mail is asked to put the entire package in a second bag and report it to the CFIA.

If the seeds are already planted, the CFIA asks from them to be removed.