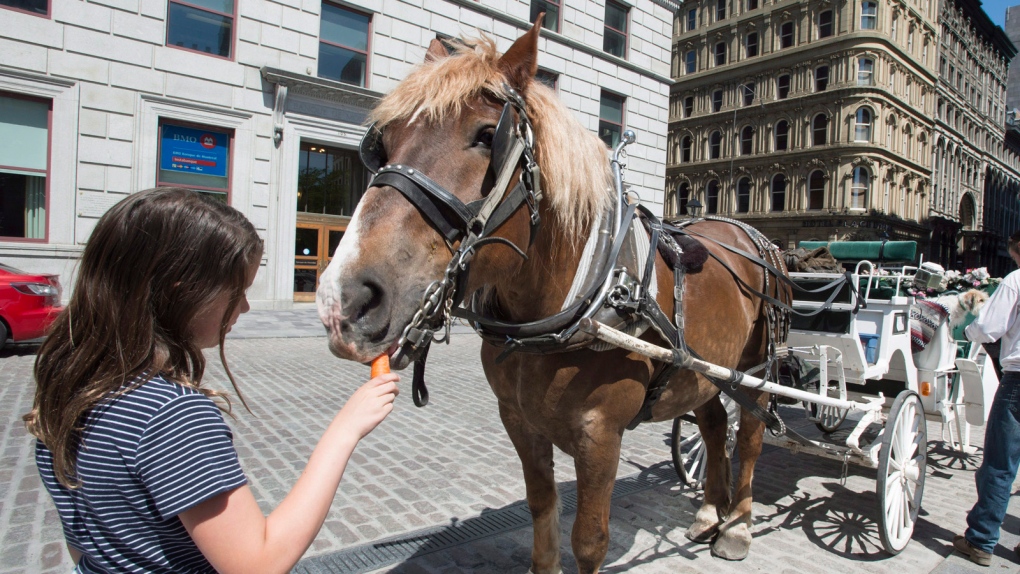 A girl gives a carrot to a horse in Old Montreal Wednesday, May 18, 2016 in Montreal. (THE CANADIAN PRESS/Paul Chiasson)

Coderre said the rules will include limits on how long the horses can work and in what temperatures.

"I think the horse is part of our history, part of our heritage, and we have to make sure that we protect, first and foremost, the horses," he told reporters.

That decision was later reversed after a Quebec Superior Court justice ruled the carriages should be allowed to continue operating.

In an executive committee meeting earlier Wednesday, Coderre said the new rules would limit the horses' working days to nine hours and prevent them from working at temperatures over 28 C. They will also have to be seen by a veterinarian at least twice a year.

There will be new rules for drivers, who will have to follow a dress code and complete a course focusing on customer service and tourism. They will also have to report any accidents or incidents involving the horses.

The bylaw will be tabled Monday and is expected to be adopted in August.

In the long term, Coderre said the city would consider building new stables for the horses.

Coderre's announcement was quickly panned by some animal-welfare advocates, who have been calling for a total ban on the carriage rides.

Alanna Devine of the Montreal SPCA says it's inherently dangerous and unhealthy for horses to be working in crowded downtown areas.

"(The bylaw) doesn't address the underlying issue of horses being prone to spooking, of having to work on concrete all day, which can cause lameness, and having to be amidst traffic and inhaling exhaust fumes," she said in a telephone interview.

Mirella Colalillo, a spokesperson for an anti-caleche coalition, said her group would continue to campaign to get the horses off Montreal's streets.

"Montrealers are tired, sad and angry to have to witness and document the same treatment and exploitation every year, while other cities around the globe are successfully implementing change with abolishment of the horse-drawn carriage industry," she said in an email.

Luc Desparois, who owns Lucky Luc stables, said the bylaw would make it hard for him to make a living.

He says the decision to lower the temperature limit to 28 from the current 30 C could cost him half his revenues during the short summer season.

"If they want beautiful horses and carriages, I'm not able to live, I can't (afford to) feed them like that," he said in an interview.

Desparois says horses handle heat better than humans do and noted the temperature limit is 32 C in Quebec City.

While he also takes issue with mandatory training for drivers, he says most of the rules on well-being cover things the stable already does.

"Our horses are in good health, in good shape, they're happy and healthy in their work," he said. "Let anyone try to prove otherwise."

Montreal isn't the only city dealing with tough questions on the safety and welfare of carriage horses.

A petition to ban caleches in Quebec City rose to more than 36,700 signatures after two recent incidents involving its horses.