Mom tells MPs how she lost daughter to human traffickers: 'It baffles me' 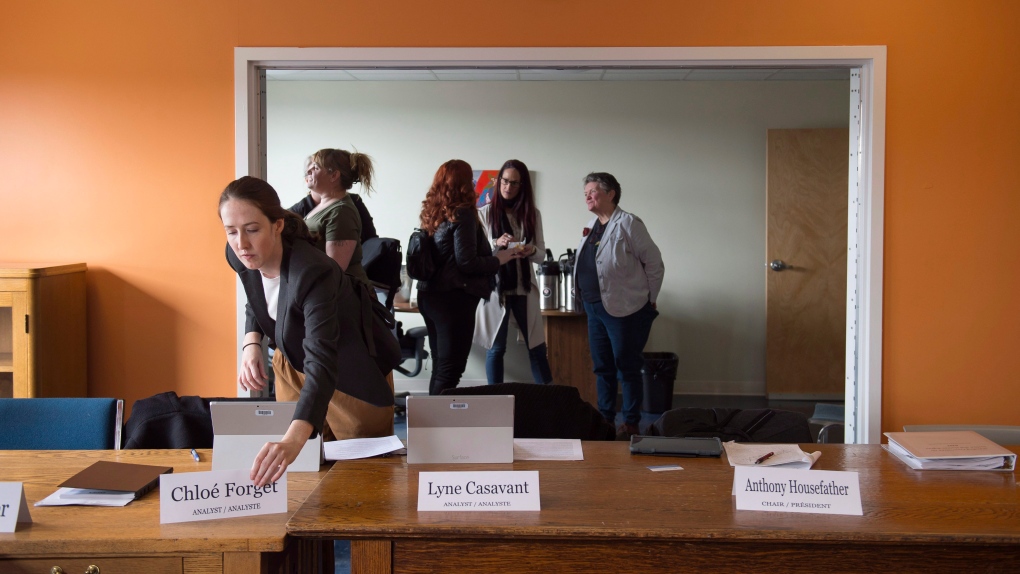 A member of the organizing committee adjusts name placings during a break in the first stop of a cross-country parliamentary committee meeting on human trafficking in Halifax on Monday, March 19, 2018. THE CANADIAN PRESS/Darren Calabrese

HALIFAX -- She was a strong, well-spoken young woman who came from a loving home in western Nova Scotia.

But it wasn't until Maddison Fraser had moved to Alberta in her late teens that her mother learned she had been lured there to work in the sex trade.

Jennifer Holleman of Yarmouth, N.S., told her agonizing story Monday to a federal committee that has just started travelling the country to learn what to do about combating human trafficking, which some are calling a growing form of modern slavery.

"She thought she was in a relationship for all the right reasons, but it turned out to be all of the wrong reasons," she said after making a presentation to the House of Commons standing committee on justice and human rights.

"It baffles me that this actually happened to her. There wasn't a lot of warning signs until I started to dig."

At one point, Holleman pulled two photos from her purse, one showing her daughter, then a healthy blonde-haired girl with a perfect, telegenic smile.

The other photo shows the same girl, but she is barely recognizable. Her face is bloated. Her short hair is ragged. And both of her eyes are blackened and almost swollen shut.

"They set her hair on fire," Holleman said, referring to the pimps who abused her. "They burned her with cigarettes and lighters. They beat her beyond recognition, and they all sexually assaulted her."

Fraser cut off communication with her mother after her double-life was revealed.

Holleman went to police, but they said there wasn't much they could do.

"When you feel that your hands are tied and you can't protect your children, it's the most horrifying feeling in the whole world," she said.

Just over a year later, Holleman started speaking out about what happened, revealing that she had found a voice recording on her daughter's cellphone that offered evidence about the brutal beating she had endured -- and who may have been responsible.

"People need to be made aware of this," she said, her strong voice cracking ever so slightly.

"Today, when I told her story, I saw members of Parliament with tears in their eyes ... I wanted to make them feel what I feel."

Holleman said the RCMP have reopened their investigation of her daughter's case, but details remain sketchy.

The 12-member, all-party committee heard from other parents and survivors of the sex trade Monday, but the hearings were held behind closed doors. More hearings are scheduled for later this week in Montreal, Toronto, Edmonton and Vancouver.

"It was my impression that this mainly affected people from broken families who were looking to find love that they weren't getting at home," he said. "It doesn't seem to be the case at all ... You have a number of people being trafficked who come from perfectly stable, middle-class homes who are doing well in school with loving parents."

He said human trafficking is a big problem in Nova Scotia, where a Halifax-area street gang known as North Preston's Finest has built a reputation for preying on young girls.

"There's established gangs that are working out of nearby areas, and it's a port city that attracts people from other countries," he said after the morning hearings. "This gang is not only limited to Nova Scotia but is working throughout Canada, and particularly in Alberta. And it seems that Nova Scotia is one of the parts of the country that is more heavily burdened."

The trafficking of Nova Scotia women received national attention last August when two men -- both originally from the province -- were charged after an 18-month, seven-province police investigation dubbed Operation Hellbender.

Police said the two were part of a ring that allegedly forced numerous Nova Scotia women into the sex trade across Canada.

Police confirmed all three were associated with North Preston's Finest.