Minks freed from Quebec farm at centre of cruelty allegations 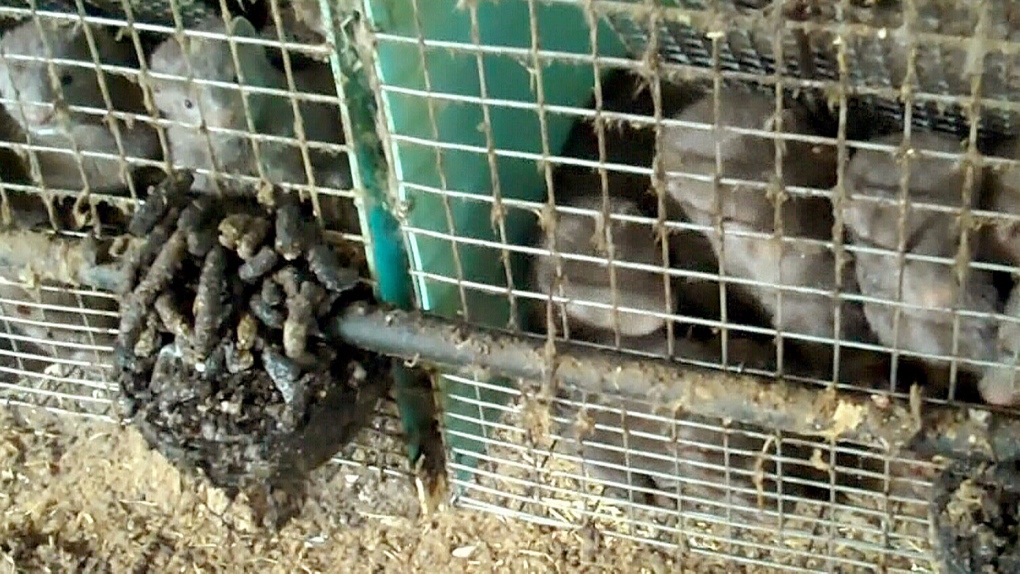 The Society for the Prevention of Cruelty to Animals officials visited a Monteregie region farm in early May and again this month after receiving a complaint about conditions inside like these mink.

MONTREAL -- An intruder has deliberately set loose 3,000 minks from a rural Quebec fur farm and some of the creatures may have found their way off the property, provincial police and wildlife officials said Wednesday.

The farm is at the heart of allegations of animal mistreatment and various groups tried last week to force the government to remove as many as 80 foxes and several thousand minks from the facility.

A spokesman with the Forests, Wildlife and Parks Department said 3,000 minks were on the loose, but it was impossible to know how many had been recovered late Wednesday.

Equally problematic was that a water feeding system was allegedly broken by an intruder.

Laurent Lessard, the minister in charge of the department, said there were concerns the minks could die from starvation because they are domesticated or might attack other small animals at neighbouring farms.

He called for calm and implored the population to allow the department to do its job.

The incident is the subject of an ongoing criminal investigation.

"On the scene, the police officers saw that the cages in which the minks were kept had been opened," Kemp said. "Hundreds of minks were loose, most were in the barn but some were able to get outside."

The facility hasn't been identified by either the government or animal welfare groups because of possible legal recourse.

Alan Herscovici, executive vice-president of the Fur Council of Canada, said freedom could mean big trouble for the minks.

"They are not really well equipped to survive in the wild, and so if people think they were acting for animal welfare, they were doing quite the opposite for these minks," said Herscovici, whose group is a non-profit, national industry association.

In addition to the possibility of dehydration or starvation, the minks could also be run over by cars.

Herscovici says the animals are drawn to the sound of car engines because it is similar to that of a machine used to feed them.

"Any of them the farmers don't manage to catch again, most will die," he said.

Animal advocate groups like the Montreal SPCA and Humane Society International Canada had called on the government last week to seize the animals because of their poor health and substandard living conditions.

In May, SPCA officials said the animals were dehydrated, malnourished and living in cramped quarters. During a visit this month, an official said the conditions had deteriorated. They published images and video last week detailing the conditions.

The SPCA said last week it was even prepared to house the animals if the government required assistance. Wildlife falls under the government's responsibility.

"(The SPCA) hopes that the minks will be safely recovered and placed in wildlife sanctuaries rather than returned to the fur farm," the organization said.

But the government has been steadfast in wanting to keep the animals on the farm and said removing them would be complicated.

The government insists that while there were problems at the farm, things have improved recently and a plan was in place to ensure longer-term treatment for the animals.

The farm owner was working with neighbours and government officials to recapture the minks on Wednesday.

A provincial association representing mink farmers also weighed in on what it called the work of "misguided extremists."

"Far from 'liberating' the mink, the misguided extremists who did this have doomed these animals to much suffering and certain death," said Pierre Labonte.