OTTAWA -- Being called an ice princess. A slut. That they only joined the army to find a man.

Those are just some modest examples of the misogynistic, highly sexualized culture that pervades the Canadian military and confronts its female members every day, a long-awaited sexual misconduct review said Thursday.

Eradicating that culture will take time and a concerted effort from military leadership, former Supreme Court justice Marie Deschamps said in her report -- a conclusion agreed to by top Forces brass.

They part ways, however, on the question of whether the problem can be resolved within the military itself or whether it demands outside help.

A perceived failure on the part of the Forces to adequately understand the extent of the problem in its ranks is what led to Deschamps being called in last year in order to plumb its precise depths.

Her study, given to the military last month but made public Thursday, documented a sexualized culture that new soldiers encounter the minute they join -- one so pervasive they eventually become desensitized to it.

The result is an environment where women are afraid to report allegations of sexual harassment or assault because they fear career repercussions or not being believed by their chain of command, the report found.

Deschamps said she was able to document the extent of the problem -- far worse than the military had ever previously been willing to acknowledge -- mainly because she's not a soldier.

"And when I looked outside at other organizations who appeared to have made improvements, they all were independent."

One of Deschamps' key recommendations is to take the existing complaint and support process outside the military bureaucracy and create an independent agency, similar to those in the U.S. and Australia.

Gen. Tom Lawson, chief of the defence staff, called the idea "unique," and "interesting" but one requiring further study. He refused to commit to establishing such an agency.

"I think what we need to do is look at what provides the proper outcome for our members," Lawson said.

"There is no discussion on the fact that we understand the point of Madame Deschamps' recommendation -- that is to provide a different system, a different route, for our members that have found themselves victimized to report."

Lawson suggested the existing military justice system, as an example, functions independently and is able to handle the complaints that come its way; Deschamps' study was not given the mandate to look at that system or how it handles allegations of sexual crimes.

In the end, the military only outright accepted two of the report's 10 recommendations -- that they acknowledge there is a problem and that a broad culture shift is required to fix it.

The remainder, which stemmed from the creation of the independent centre as the place to further overhaul existing policies and systems, were only accepted on principle.

The Forces said they are conducting several reviews to determine best practices and are promising public updates on their progress by fall.

The report -- which Lawson called disturbing -- involved over 700 interviews. 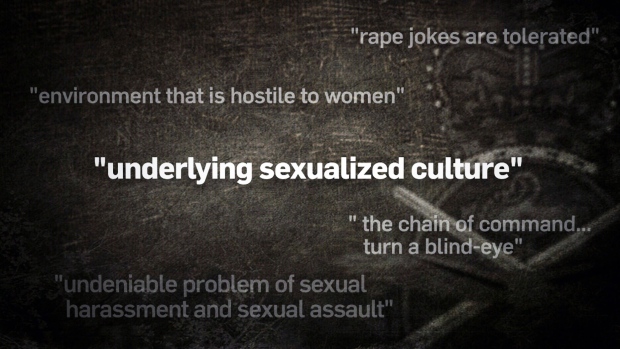 It detailed rape jokes, innuendo and crude, casual references to female genitalia as some of the incidents faced by soldiers. It also provided an insight into the perpetrators.

"For example, a commonly held attitude is that, rather than be a soldier, a sailor or an aviator, a woman will be labelled an 'ice princess,' a 'bitch' or a 'slut,"' the report said.

One male participant told her: "Girls that come to the Army know what to expect."

Maj-Gen. Christine Whitecross, who is leading the team organized by the military to respond to the report, recalled that when she joined the military, she too encountered such attitudes.

Things have improved over time, but there is a long way to go, she said, echoing her colleagues' description of their work as a "no-fail mission."

"Every young woman and young man who dreams of being a part of the Canadian Armed Forces depends on it," she said. "We will not let any of them down."

"If it's such a serious, systemic problem throughout the military, from the bottom to the top, then how many more women have to be victims of sexual assault or abuse before this military is able to change its culture?" Harris said.

"That's not something that's going to happen overnight. They're clearly failing to treat this as a major crisis, a major crisis of human rights and women's rights."