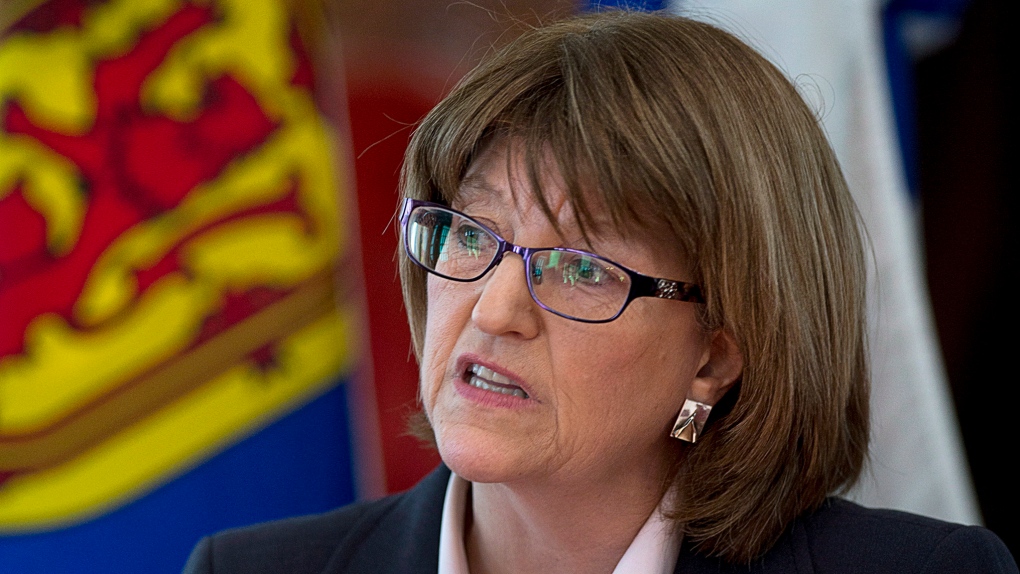 N.S. Finance Minister Diana Whalen fields questions at a media briefing before delivering the Nova Scotia budget in the legislature in Halifax on Thursday, April 3, 2014. THE CANADIAN PRESS/Andrew Vaughan

HALIFAX -- Nova Scotia Mi'kmaq chiefs have accepted an apology from Premier Stephen McNeil for a controversial government legal brief that implied members of a First Nation band are a conquered people.

McNeil made the apology Thursday during a meeting between chiefs and the provincial cabinet at the Nova Scotia Archives.

"They (the government) certainly don't have the same views as what's been said in the court," Membertou Chief Terrance Paul said following the meeting.

"We appreciate that. The premier has apologized and the chiefs have accepted that and we are very fortunate to have a government that is willing to listen to the Mi'kmaq."

McNeil had previously distanced himself from the brief, which had been presented as part of the government's case in an appeal by the Indian Brook band of its approval of the plan by Alton Gas to store natural gas in salt caverns near the Shubenacadie River.

Indian Brook had argued the province has a duty to consult. The legal brief presented by government lawyer Alex Cameron said the Crown's obligation to consult extended only to "unconquered people," and that a band's submission to the Crown in 1760 negated its claim of sovereignty and negated government's constitutional duty to consult.

That position sparked an outcry and accusations the government had set back relations with First Nations people.

"The words that were attached to a brief that went before the court were not mine and were not my feelings," said McNeil. "I am grateful for the reception I received from the chiefs."

During Thursday's meeting, the provincial archives displayed the original documents associated with the early peace and friendship treaties between the Mi'kmaq and the Crown signed in the 1700s.

Chief Sidney Peters, co-chair of the Assembly of Nova Scotia Mi'kmaq Chiefs, said it was a fitting way to mark the meeting with the cabinet, which had been scheduled before the controversy erupted.

"We have good working relationship with the lead chiefs and the various ministers of departments and we look forward to working together in the future," said Peters.

McNeil said a review was continuing in the Justice Department to find out how the brief was originally filed in court in July without either he or Justice Minister Diana Whalen signing off on it.

There was also no word on whether any discipline had been taken against Cameron or whether he would work on aboriginal files in the future.

Mi'kmaq groups have raised objections to the use of Cameron on aboriginal issues after he penned a 2009 book that attacked the Supreme Court of Canada's landmark Marshall decision on fishing rights.

"I know there was a letter written by the chiefs back in 2009 which now has come to light," McNeil said. "Obviously that will be part of what we assess."

Paul said the chiefs feel their concerns are being heard.

"We're very aware of certain people and we'll certainly be monitoring whatever happens in the courts that involves the Mi'kmaq," he said.

McNeil said the government was examining whether it could withdraw the offending part of the court argument, although he wasn't sure if it could be done.

NDP Leader Gary Burrill said he's received a legal opinion that it can and he wants the government to do it as quickly as possible.

"In order to give the apology real effect what's required is for the government to officially notify the court that the brief that is before the court does not in fact represent the views of the Government of Nova Scotia," said Burrill. "Morally it makes sense."