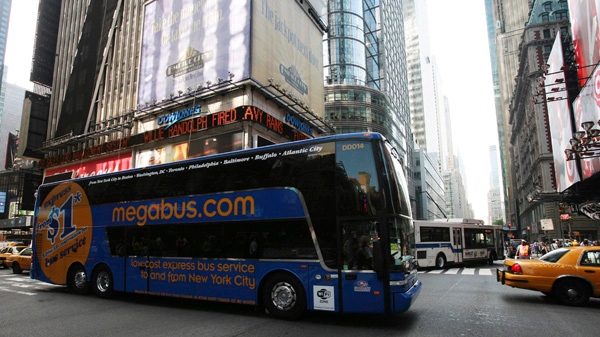 A Megabus double-decker bus drives through New York's Times Square to inaugurate its service to the northeast in this June 17, 2008 file photo. (AP / Mark Lennihan)

SOUTH GLENGARRY, Ont. -- Police have charged a 64-year-old Megabus driver with careless driving following a summer crash on an Ontario highway that injured more than 20 people.

About 45 people were on board the double-decker bus travelling from Montreal to Toronto in late June when it crashed into the back of a tractor-trailer near Lancaster in eastern Ontario on Highway 401.

Four people were seriously injured in the crash.

A spokesman with Caravan Group of Companies, that owns the truck involved in the collision, previously told The Canadian Press the truck was hit from behind by the bus, clipping the back corner and moving along on the right side of the truck before taking out the passenger-side mirror.

Sean Hughes, a spokesman with Coach USA North America that owns Megabus, said the bus driver has been suspended until the issue is resolved.

"We will take the necessary actions concerning the driver based on (the police) investigation and the court's finding," Hughes said. "Safety of our passengers and employees is our top priority."